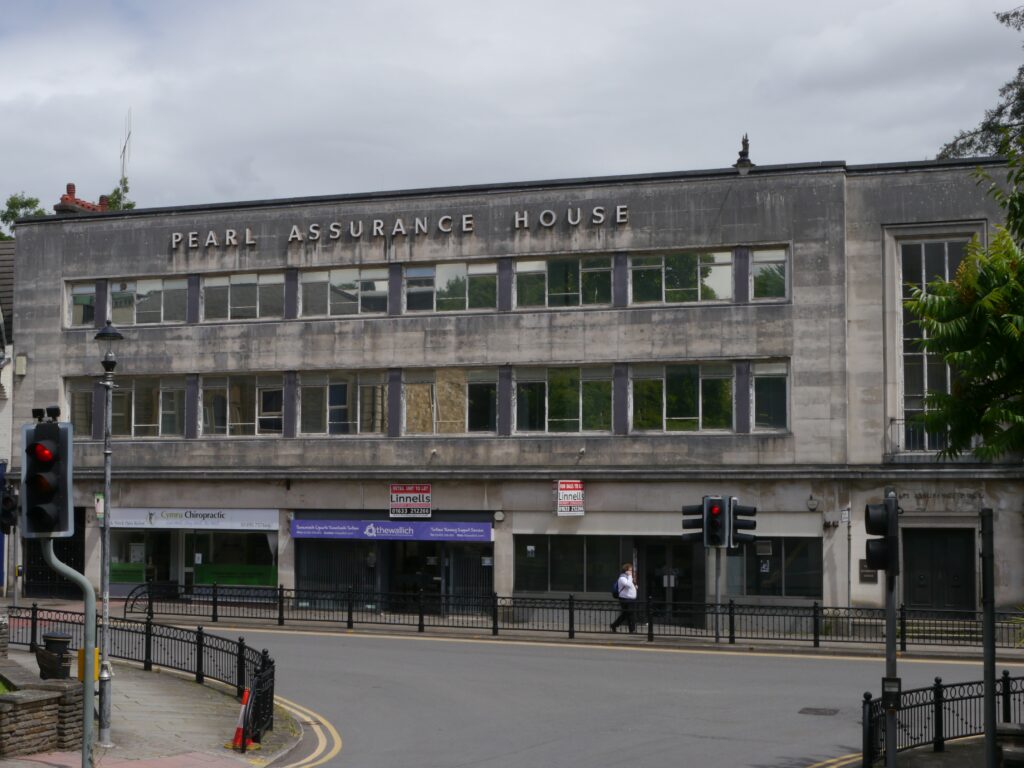 Angela Evans investigates the concept of placemaking, its uses in policy and its application to the Welsh town of Pontypool.

Until a week ago I’d never heard of placemaking. If I was to hazard a guess, I’d have said it was a Channel 4 makeover programme. In fact, it is a multi-disciplinary approach to the planning, design and management of public spaces, adopted by the Welsh Government, and the guiding concept behind plans to redevelop Pontypool town centre.

I moved to the Pontypool area last year and it saddens me to see the once proud town struggle to keep its head above water. It’s one of the oldest industrial towns in Wales (if not the world) with 25 listed buildings studding an urban strip of less than half a mile long. Whilst most of the town we see today was built in an ebullient burst of civic pride in the late 1800s/early 1900s,  architectural styles are eclectic – ranging from flamboyant art deco to restrained classicism to fanciful Greek revival. Cadw describes the town as  ‘impressive,’ ‘architecturally sophisticated’, a ‘remarkable assertion of history.’ But many of the town’s landmark buildings now stand empty, the heyday bustle that used to surround them has long gone.

A third of shops are vacant (and that’s in the town centre) and a further fifth are kept on life support by charities and voluntary organisations. Those still in business – such as the tattoo parlour, betting shop, care recruitment agency, nail bar and fishing tackle/gun accessories shop –  offer few browsing opportunities. The indoor market, a fine Victorian building covering over 600 square metres and with six separate entrances/exits, has benefitted from a £2m+ refurbishment but, in spite of its fresh paint and energetic promotion, has a desolate air about it. Many of the stalls are tenant-less and a monthly artisan market started in February 2022 has failed to really take off.

The placemaking approach emphasises the importance of taking into account a whole place rather than individual land uses or developments.

The town is a casualty of the de-industrialisation that has blighted so many south Wales valleys towns and the building of a shiny new shopping centre at Cwmbran new town in the early 1960s siphoned off much of the town’s shopping activity.

Pontypool Placemaking Plan sets out Torfaen County Borough Council’s plans for how the town centre’s fortunes can be turned around. The plan, prepared by The Urbanists, a Cardiff based urban design and planning consultancy, was out for consultation for four weeks until the end of June 2022. ‘Placemaking’ has a long history. It could be argued that it started with the earliest planned settlements thousands of years ago, but it first entered public policy parlance in the US in the 1960s as an antidote to car-led urban planning. One of its most well-known proponents was Jane Jacobs (Life and Death of the Great American City) who campaigned vigorously for the creation of vibrant, inviting neighbourhoods that catered for people, not just cars.

The placemaking approach emphasises the importance of taking into account a whole place rather than individual land uses or developments. Cardiff Bay, where individual buildings have little relationship to each other or their waterside location, is a good example of why an integrated whole-place approach is important. There has been some criticism of placemaking in areas where state investment in public spaces has been the catalyst for a wave of gentrification that has priced out established residents and businesses. I have seen this happen in London, on Bermondsey Street SE1. The change happened remarkably quickly, neighbourhood shops washed away by an incoming tide of design studios, delis, restaurants and estate agents. One newsagent grimly hung on, a notice in the window saying ‘we are not for sale, we have been here since 1973 and are staying put’. But within a year they were gone and a posh florist had taken their place.

Pontypool’s placemaking plan is likely to remain a pipe-dream because it pays only passing attention to the town’s realities.

But Pontypool is no Bermondsey and, as the refurbishment of the market hall has suggested, it will take more than a face-lift to bring in traders and visitors. And that is one of the problems with Pontypool’s Placemaking Plan. The great majority of the plan’s 50 or so actions focus on infrastructure, on refurbishing and repurposing existing buildings and enhancing public spaces.  If the plan was successfully realised there is little doubt that Pontypool would be transformed. It would have a lively café quarter with alfresco dining, a cultural hub with ‘night time offers’, a new events space linking the town to the local supermarket, an integrated active travel hub, incubation spaces for new foundational economy businesses and a high design café linking Pontypool Park with the town. As much as I’d like Pontypool to experience a Cinderella transformation, I can’t help but wonder how realistic these plans are. Pontypool has high levels of deprivation and few tourists or visitors. Where will the demand come from? The George, a lovely tiled Victorian pub located in the centre of town has had a notice ‘Under refurbishment – café-bar opening soon’ on its barricaded doors for over 3 years. The placemaking plan recommends ‘undertaking a market testing exercise for projects with new commercial uses to confirm demand and viability of proposed use and identify potential occupiers.’ But the whole plan is predicated on there being businesses and customers to fill the newly refurbished buildings and spaces. If the demand isn’t there or can’t be drummed up, the plan can’t ever become a viable reality. It’s like promising someone they will win the lottery…but only if they buy a winning ticket.

Pontypool’s placemaking plan is likely to remain a pipe-dream because it pays only passing attention to the town’s realities. Architecturally Pontypool is a gem, but it has major socio-economic problems. Pontypool was created by private capital, but that capital jumped ship over a hundred years ago and the town is now state-dependant. The town has above-Wales averages for almost all aspects of deprivation – income levels, health, educational outcomes. Trevethin, a social housing estate of over 2,000 properties to the north of the town, is in the top 10% of the Welsh Index of Multiple Deprivation and the town centre has significant community safety issues. Whilst town centres across the UK are struggling to survive (footfall is on average 16% down on 2019), all indicators of town centre performance are flashing red for Pontypool.

The placemaking plan’s middle-class vision for the town plasters over these major structural cracks. Pontypool is envisaged as another Abergavenny, a foodie destination, cafés spilling onto the streets, day visitors browsing independent shops, tourists visiting heritage sites. Whilst there may be only ten miles or so separating Pontypool and Abergavenny, they are poles apart in terms of profiles and prosperity. Visitors to Abergavenny support around 30 town centre cafes; in Pontypool there are 3 cafes that cater mainly for locals. This may be a superficial comparator but it illustrates the stark differences between the two places.

I know there is no simple solution to the turn-around of post-industrial towns like Pontypool – as the politicians say there is no ‘silver bullet’. But it is clear that if placemaking is to work it needs to be more than a cookie cutting exercise that seeks to replicate the Abergavenny model across the valleys.  It needs to have a deep understanding of place and to closely involve local people. A few years ago Torfaen CBC commissioned Cardiff University to carry out a ‘deep place study’ of Pontypool. Whilst the report, published in 2016, is concerned to establish its academic credentials by positioning itself within theoretical and policy debates, it provides a detailed analysis of local social and economic circumstances and the potential for public sector interventions on community safety, health and care services, skills development etc.  However, the analysis does not appear to have fed into the 2022 placemaking plan.

Whilst the challenges are considerable, there are some important opportunities. Pontypool has a rich history; it is compact with many handsome signature buildings; it has a museum housed in Grade 11 listed stables; it sits alongside a lovely river and canal; and has a beautiful 1,500 acre park with bandstand, Italianate gardens, shell grotto and woodlands. In a Guardian article on struggling post-industrial towns, Aditya Chakrabortty wrote that Pontypool has one of the most ‘sumptuous’ small town centres in Britain. Also, whilst several Pontypool wards are seriously deprived, others are relatively well-off (although currently taking their spending power elsewhere). There are also indications that the area’s demographics might be shifting. Just as the building of the council estate at Trevethin in the 1960s and 1970s altered the town’s socio-economic profile, so the recent development of a number of  ‘urban villages’ on Pontypool’s outskirts is likely to impact on demographics and disposable incomes.

Private capital will never come flooding back into Pontypool but there are opportunities for the public sector to create an environment where small businesses feel confident.

Whilst there is potential for a town uplift, and the placemaking plan includes lots of creative ideas, there is unlikely to be enough business and consumer demand to realise the plan’s full ambitions. Also, given the financial damage wrought by Covid, Brexit and inflation, it’s hard to imagine that the considerable amount of public and private capital investment required will be forthcoming. The plan acknowledges there may be a funding gap and recommends going for some quick wins (such as street art and greening, highway interventions to prioritise pedestrians, pocket parks and enhanced lighting and signage). However, previous street embellishments have failed to lift the town and the lack of on-going maintenance – the flaking paint on Victorian style railings, the litter and weeds – reinforce rather than ameliorate the town’s degradation. It is important that the limited capital investment that is likely to be available isn’t spread too thinly, like seeds scattered on stony ground.  The emphasis should be on a small number of related projects that make the most of existing assets and could be a catalyst for further development – for example, improving the links between town, park, river and museum. Cadw has stated that the park is ‘central to the fortunes of the town’ and the museum is currently seeking funding from the Tranforming Towns fund to up-grade its facilities. It would make sense to build on these assets.

Given the pivotal role of the public sector, it’s equally important for public services to be re-engineered to achieve place-based objectives – for example, locating services to increase town centre footfall,  making public spaces clean and safe, supporting local businesses and start-ups through rate rebates etc and ensuring the allocation of town centre residential conversions doesn’t lead to a concentration of vulnerable tenants. Private capital will never come flooding back into Pontypool but there are opportunities for the public sector to create an environment where small businesses feel confident enough to dip their toes in the water and local people can have renewed pride in their town.  This blended approach requires imagination, flexibility, coordination and a deep understanding of place.  If the limited amount of investment available isn’t to be mis-directed, it is crucial that local people and businesses who know the locality well are closely involved and that any plans reflect their views and aspirations for the town and what they value most. The process should be more hand sculpting than cookie cutting.

All Around Us – the Pontypool Deep Place Study, Dr Mark Lang (Cardiff University, 2016)

‘Just About Managing? In towns like Pontypool that’s a dream’, Aditya Chakrabortty (The Guardian, 22nd November 2016)

Angela Evans worked for years as a social policy analyst, including a stint as head of social research with the Welsh Government, before swapping the meeting room for the archives and studying for a history PhD at Cardiff University. Her writing reflects her interests in walking, history, landscape and nature. Her essay Tidelands: Tales from the Unsung Welsh Coast was short-listed for the Welsh Writing Awards 2020.