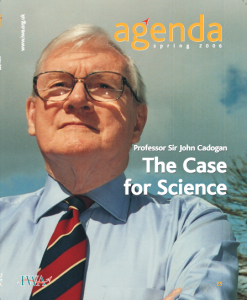 Page 4 – A pier with too few supports

Professor Sir John Cadogan argues that the Assembly Government should base its science policy on scientific rather than economic principles.

Jonathan Adams recommends how Cardiff Bay can be connected with the city centre.

Eurfyl ap Gwilym estimates that Wales has been denied more than £1 billion by the Treasury over the past five years.

Rhobert Lewis discusses the arguments for an all-Wales police force.

Richard Brunstrom says an all-Wales force should be part of the devolution process.

Dylan Jones-Evans questions the centralisation of power in Cardiff Bay.

Ferdinand Mount says everything in Britain has been modernised except its politics.

Gillian Bristow asks whether enough is being done to involve the local community in the LNG development in Pembrokeshire.

Brian Morgan says the Assembly Government should produce a Welsh model for PFI.

Peter Davies relates how the Prince of Wales’ charities are engaging with the problems of the rural hinterland.

Tamsin Stirling looks at the IWA’s new report on the Future of Social Housing in Wales.

Page 45 – Below the threshold

David Egan declares we cannot go on tolerating the waste that results from low levels of educational achievement at 16.

Mark Drakeford argues that health policy should focus on equality of outcome.

Andy Klom says Wales should look beyond trade and funding in its engagement with the EU.

Gordon James argues that the Assembly needs greater powers over energy policy if it is to lead the way on Climate Change.

Geraint Talfan Davies says the arts funding review is a chance to get away from policy-making on the hoof.

Peter Stead joins in with Wales Week in New York.