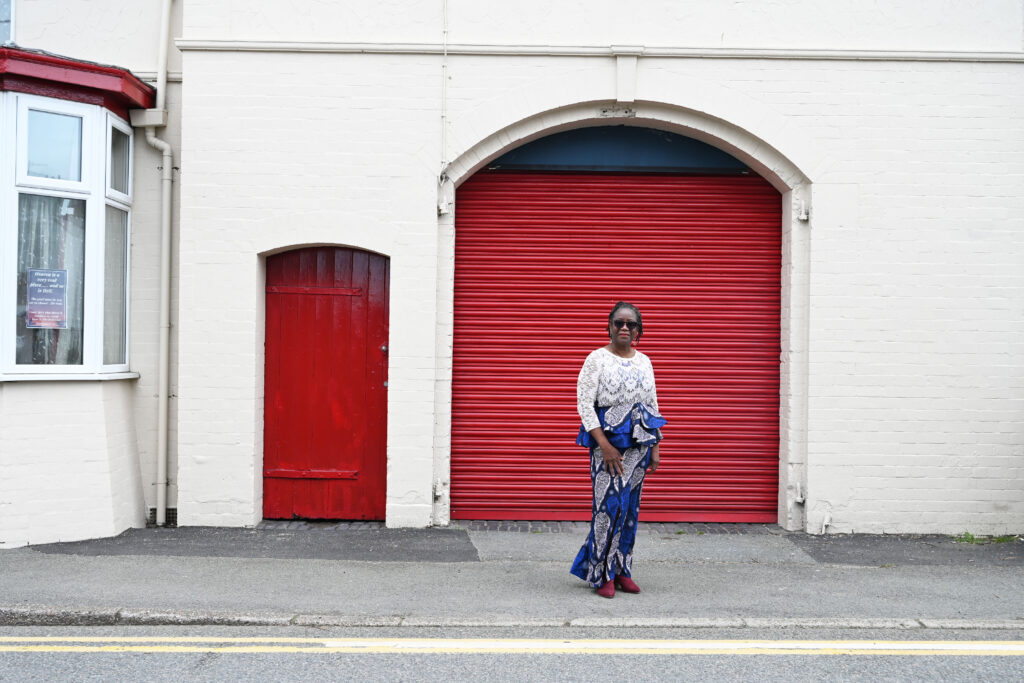 After the initial years spent in Harlow, having had two children in the English town outside London, Maggie thought it was time for a change. A magical moment on a regular visit to north Wales, during a long walk to Porthmadog from Pentrefelin, emphasised the fact.

London-born Nigerian Maggie Ogunbanwo explains: ‘During the walk I started crying for no reason. My faith is strong and I asked God what is the matter?’

‘A voice told me: I want you to pray for my people here. My thoughts were why? but I didn’t argue.’

‘I called my friend in Zimbabwe and she told me it was what I had been directed to do and we prayed over the phone. I parked the thoughts until my husband Olufemi Ogunbanwo told me we were moving to north Wales after 18 years in England. I was so stressed about the situation I lost my hair, then remembered the epiphany and suddenly felt prepared.’

Maggie says: ‘The move wasn’t easy as our first concern was the education of our children and finding the right schools. We started looking around Snowdonia and the stipulation was that both junior and senior schools had to be within walking distance. We found houses but they all fell through for one reason or another until, we think, one property found us.’

‘In an 88% Welsh speaking community, one of the most predominantly Welsh speaking areas in Wales, and with no money, we arrived to start a ministry in a damp, old pub: The Red Lion in Penygroes, a small village south of Caernarfon.’

Now Maggie’s whole family are Welsh speakers. ‘I started a pop up restaurant showcasing Africa and my husband founded a church.’

But in 2015 the restaurant was closed and Maggie decided just to concentrate on the food, creating a hot sauce that became very popular after the family started bottling the product. In 2016 at the Caernarfon Food Festival – Gwyl Fwyd –a hot pepper sauce was launched and sold out.

With this boost of confidence in her food, Maggie started Maggie’s Exotic Foods with the help of Business Wales, adopting the name Maggie’s African Twist after a suggestion from a Bangor University student. Now more than 15 sauces and spice rub products hit the food market.

Then out of something so evil the world opened up for the company now called Maggie’s An African Twist to Your Everyday Dish.

At the beginning of the pandemic Maggie was confronted by a large white swastika symbol, widely recognised for its appropriation by the German Nazi Party, painted on her bright red garage doors. An obvious attack on her and her family.

Wales’ way of supporting her was for the Penygroes community to get together to paint over the symbol.

This also gave her national publicity. Within an hour of the story appearing, 12 online orders were taken followed by 100 during the next hour. Within the next two days Maggie had more orders than in the whole of the previous year.

Maggie remembers: ‘It happened during the height of Black Lives Matter and there were events in Maes Caernarfon. It could have been a negative reaction to that but something that was so bad created an awareness of us and made the community stronger against whoever did it. A definite positive from what was an upsetting negative.’

Since that day Maggie has become a member of the Food and Drink Independent Board (the only Black person on the board) and she has also had a book published.  Melting Pot contains 15 recipes from around the world, and won a Gourmand World Cook Book Award. It also won Best in the World Award in the migrant category. A first in Wales.

She explains: ‘It is good to be involved helping Black and ethnic minority communities with small start up businesses. That is my strength. I feel I can be a role model as someone that has achieved this and I can give a perspective they don’t have. I can also show the diversity of small business.’

Because of this success and also Maggie’s personality, she has had many media opportunities, a regular on Radio Wales and also seen on television.

But for the action and painted sign on a garage door who knows what would have happened. It may have taken just a little while longer but I still bet Maggie’s An African Twist to Your Everyday Dish would have made it to your table.

And as for the church in the now not so damp old pub in Penygroes… it still continues, but that’s another story.

Portrait of Maggie by Glenn Edwards.