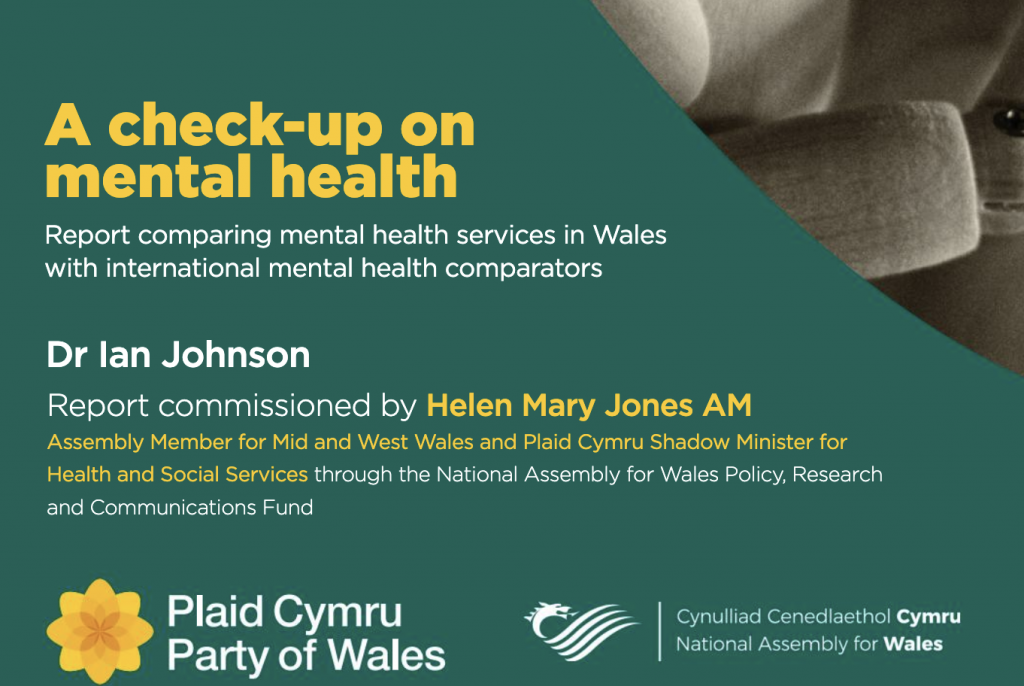 The Welsh Government has thrown money at our mental health crisis without measuring the outcomes. Helen Mary Jones writes that a new report shows it’s time to evaluate – not just hope for the best

Mental health is something we all have. And just like our physical health, it can fluctuate between good and poor at any time for a wide variety of reasons – or none at all.

In recent years, more and more people have started to feel comfortable talking openly about their mental health, and that’s a very good thing. Our mental health, whether it be good or poor, should never be something to be ashamed of.

But as increasing numbers of people come forward to seek help for their mental health, it is perhaps more important than ever that the mental health system is strong enough and efficient enough to give them the support they need.

Spending on mental health treatment accounts for a huge proportion of the NHS budget – around 11%. That equates to around 5% of the entire Welsh Government budget. In total, it’s around £750 million every year.

At first glance, you might think that’s a good thing: that mental health treatment is being treated with the seriousness it deserves – and I would agree.

But what if I told you that we can’t be sure that that money isn’t being put to good use?

At the moment, Wales doesn’t have any outcome measures at all to evidence the success of that spending. We don’t know if the services we are funding work well, and we don’t know if people using the services get better, or are helped to live well with their mental health difficulties.

There simply is no national evidence as to how effective the spending is.

What evidence we do have – some of it anecdotal – doesn’t look good. A series of reports have indicated that people’s experience of mental health treatment is poor, and their outcomes aren’t altogether good either.

None of these reports paints a pretty picture of the state of mental health services in Wales.

And as an Assembly Member, I have had countless constituents come to me asking for help because they aren’t able to get the support they need from their local mental health services. I would wager that every single AM has had constituents come to them with the same issues.

That’s why I recently commissioned a report comparing mental health services in Wales with international comparators. The report compares what’s happening in Wales to elsewhere in the British Isles, as well as countries like the Netherlands and Sweden.

What we found is that, although mental health spending in Wales is comparatively high, it’s impossible to know how successful that spending is without any national outcome measures.

We also found that Wales has fewer mental health inpatient beds compared with other countries and a comparatively smaller specialist workforce.

All too often, a problem is identified – in this case, poor mental health – and the quick fix is to throw money at it – in this case, hundreds of millions of pounds a year – and then doing nothing else.

But what matters most is not the input – that is, the money we throw at a problem – but whether that money is having any effect on people’s lives and experiences.

Unfortunately, in the absence of a national measure of outcomes, the anecdotal evidence tells us that, despite the vast amounts of money spent on mental health services, people across Wales are still having a tough time getting the support they require.

First and foremost, we need the Welsh Government to introduce a national outcomes measure for mental health treatment.

In 2012, they committed to delivering a core data set by 2014. We now know this won’t be fully implemented until 2022. How on earth can an eight-year delay in such an important measure be justified?

And aside from the effect this has on people’s lives, this also raises very serious questions about the transparency and accountability of spending taxpayers’ money.

Between now and 2022, £3 billion will have been spent on mental health services in Wales, and if the Welsh Government fails to bring forward any national outcome measures before then, we will have no way of knowing whether that money was well spent.

As our culture changes and talking about mental health and seeking support is rightly seen as a good thing to do, people must be able to have faith that the system we have in place is good enough to support them.

At the moment, I’m not sure they can be. This shouldn’t be a reason to not seek support, nor should it be an excuse to cut spending, but the Welsh Government urgently needs to sort this out.

Otherwise, how can they or any of us know where improvements are needed? It’s simply not sustainable to blindly spend hundreds of millions of pounds every year and just hope for the best.

People deserve a mental health system fit for a 21st century Wales where we can all be open about our mental health. I hope this report kickstarts the Welsh Government into delivering just that.