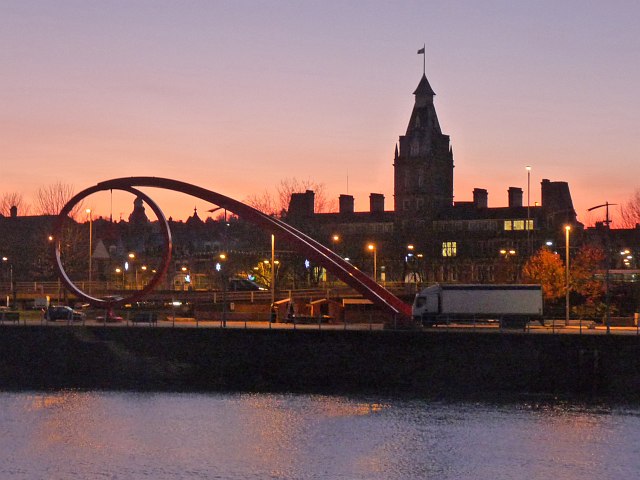 Dylan Moore explains why his Newport novel, Many Rivers to Cross, had to be fiction – and why Wales’ often disparaged third city is perfect terrain for a writer.

It wasn’t until after my novel was published that I realised it might be the very first to be set in contemporary Newport. With libraries and bookshops closed, I trawled the internet.

For World Book Day a few years ago, the South Wales Argus published a list of Gwent-based classics, an impressive array of fiction from Caerleon, Monmouth, Abergavenny and the Gwent valleys.

But the Newport books included were connected with writers who had happened to be born here, rather than with the place itself.

A fictionalised account of soldiering in 1950s Malaya, a crime novel set in Palestine and a teenage romance set in a Californian high school.

Nothing wrong with those, of course, but I did find it intriguing to the point of bewilderment that Casnewydd/Newport, this more noisome than ugly, more beautiful than lovely town of 150,000 souls, its history encompassing the Chartist Rising and the Irish mudcrawlers; a wave of steel and canals for iron and coal, birthplace of the Miner’s Fed; where Joe Strummer dug graves and discovered reggae, and where Kurt supposedly proposed to Courtney, has not managed to produce more fiction about itself in the near-century that has gone by since W.H. Davies helped unveil a plaque at his own birthplace, Pillgwenlly’s Church House Inn.

Newport is fertile imaginative territory, and yet – it seems – at least in literary fiction, very few have done any serious digging. (And let me make it clear: I’d be more than happy to be corrected on this, because if there is any other contemporary literary fiction set in our beloved Casnewydd-ar-Wysg, I would very much like to read it.)

Many Rivers to Cross is my attempt: to mine Newport’s layers; to probe its past and present; to get beneath its many skins.

And even more than the rivers, which feature prominently, many is perhaps the book’s real keyword. It is about nothing if not multiplicity.

Forced to characterise its plot and theme for the purposes of a press release or promotional tweet, I have fallen into the trap of describing it as a story of the refugee ‘crisis’.

Its central figure – Aman Berhane – can be described, as indeed he is on the book’s jacket, as ‘a failed asylum seeker’. Other characters are blurbed up as ‘a sex worker’, ‘a lorry driver’, ‘a refugee’, ‘a journalist’ and ‘a single mother’.

But the point in using such crude appellations is precisely to underline how none of us can genuinely be contained by such one-dimensionalism. Our ability to transcend such labels is what makes us human.

And that’s why Many Rivers to Cross had to be a novel.

Although initially planned as a non-fiction project, growing out of conversations with friends met while I volunteered and then worked at Newport’s Sanctuary project for asylum seekers and refugees, the writing process made it clear that if I were to get under the surface of the stories I wanted to tell, I would have to go far, far beyond a journalistic approach that would end up deploying all those soundbites you hear on the news: attempts to capture the lived experiences of many and diverse people in a single phrase.

Another phrase you hear and read a lot in the media but rarely if ever in the communities to which it supposedly applies is White Working Class. As the pandemic has proven, the working class very much still exists in 2021.

It’s another name for ‘key workers’, ‘essential workers’, ‘the people who have kept us going’. And as both the pandemic and my novel demonstrate, it’s simply no longer possible to prise apart the working class by dint of ethnicity or race – unless of course that such division is precisely your motive.

“It should be easier than ever to admit that it is indeed the working class who keep a country afloat.”

With all the praise that has been heaped on working class people by a middle class media and politicians from across the spectrum throughout the pandemic, it should be easier than ever to admit that it is indeed the working class who keep a country afloat.

But dressing them up as ‘key’ or ‘essential’ occludes the potential for new solidarities to emerge in the post-Austerity, post-Brexit and now post-Covid landscapes that predominantly working class towns and cities like Newport have now to navigate.

It’s a way of maintaining a fragmented society – and thus suits those in power.

Many Rivers to Cross portrays and explores that fragmentation, lives more smashed than suppressed.

But time and again hope is found in human connection across the manmade barriers of class and sex and race.

It is a novel about multiple physical, literal borders – my characters cross the Sahara and the Mediterranean, from Ethiopia into Sudan, from Calais to Dover and from England into Wales – but it is also about the subtle borders we face in everyday life – the ones we can cross easily, if we dare.

And for considering borders, of course, Newport is perfectly placed.

Copyright Robin Drayton and licensed for reuse under this Creative Commons Licence.

Many Rivers to Cross is available to buy now.

Dylan Moore was interviewed about his novel by Sharif Gemie at The Riverfront Theatre and Arts Centre, Newport, for an event which is now live on LoveReading LitFest. The event was supported by Newport Live.