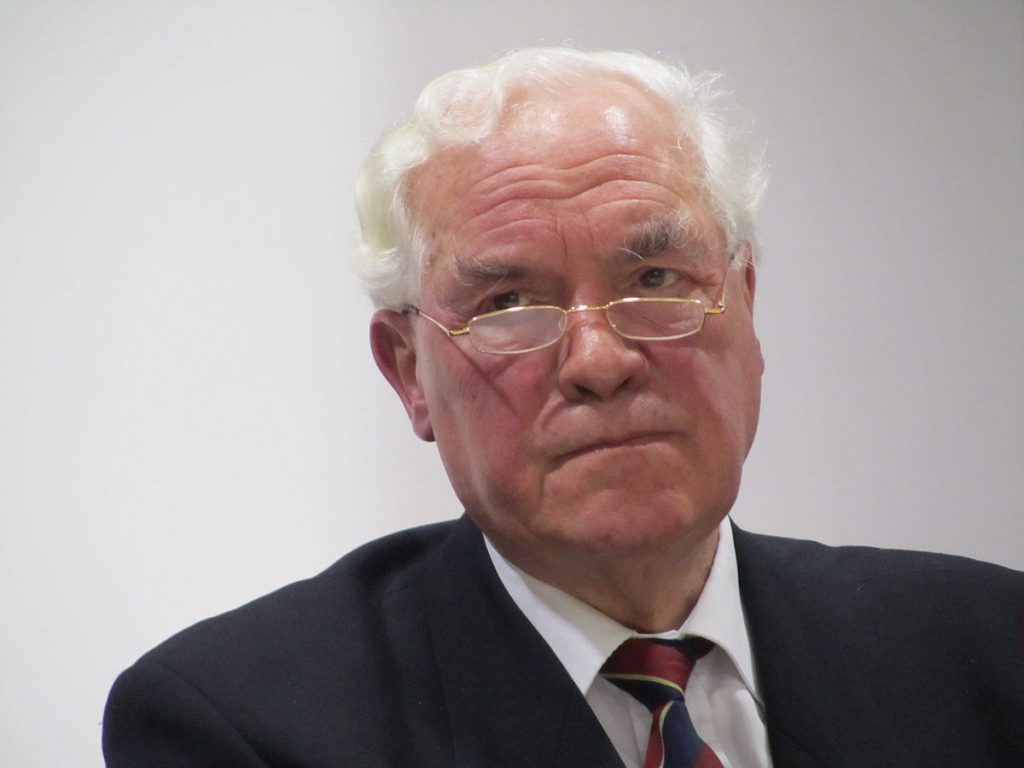 Deian Hopkin charts the life of the late Lord Elystan-Morgan, prominent campaigner for devolution and one of the giants of the Welsh political sphere.

Lord Elystan-Morgan, who died peacefully at his home in Dole near Bow Street in  north Cardiganshire on 6th July 2021 gained an enduring reputation as an intrepid campaigner for devolution in Wales within two political parties.

He was an eminent lawyer and barrister and served for many years as a judge as well as an effective member of the House of Lords.

Dafydd Elystan Morgan was born on 7  December 1932,  the second son of Dewi and Olwen Morgan of Pen-y-garn, Cardiganshire.

His family had long associations with the county.  On  his father’s side the ancestry reached back to, among others, Sir Gruffydd Fychan, knighted by Henry V at Agincourt though previously he was a renowned  supporter of Owain Glyndwr (a relative) and it was from one of these ancestors that Elystan got his name.

His mother, whose family lived for generations in Dyffryn Aeron, was descended from the poet and preacher Daniel Ddu and her ancestors included conspicuous preachers as well as farmers, while her father was a police officer who, despite limited financial resources, managed to enable his daughter to enter Aberystwyth University in 1917, a rare achievement for a woman in those days.

“At the same time he was deeply involved in the internal politics of Plaid Cymru, but it was the bitter internal battles that gradually disillusioned him.”

She  subsequently became headteacher of Bontgoch school but on marriage was obliged, under the rules of the day, to resign her position. Nonetheless she provided a crucial educational anchorage for the family.

His father, a great influence on Elystan’s life and career, was the accomplished poet and journalist Dewi Morgan (Dewi Teifi)  who left  school at 14 to work in the family’s business but subsequently, having educated himself in literature and several languages, embarked on a career in journalism and was for many years associated with Y Faner and the Cambrian News.

He won his first eisteddfod chair at the age of 22 and in 1925 won the Chair at the National Eisteddfod in Pwllheli.

In part, all of this explains Elystan’s constant poetic and biblical references, which laced his impressive rhetoric,  but also his very strong sense of place and community.

It was at Ardwyn Grammar school in Aberystwyth that Elystan first declared an interest in politics, joining Plaid Cymru at the age of 15 in order to pursue his deep interest in devolution and Home Rule in Wales and the defence of the Welsh language, causes he maintained through his life.

His contemporary at Ardwyn was John Morris, a lifelong friend and compatriot, who  chose a different political path at this point,  subsequently reached the highest ranks of the Labour Party.

From Ardwyn, both progressed to the Law Department at Aberystwyth led by the eminent legal academic Professor Llewelfryn Davies.   Elystan continued to be involved in Plaid Cymru politics and when – after graduation – he joined a law practice in Wrexham, he was quickly persuaded to stand for Parliament in 1955, at just 23 years old.

At the subsequent  elections, in Wrexham in 1959 and Meirionnydd in 1964, succeeding Gwynfor Evans as the candidate,  he increased the Plaid vote each time.

At the same time he was deeply involved in the internal politics of Plaid Cymru, but it was the bitter internal battles that gradually disillusioned him.

He was defeated in the election for the Vice-Presidency but persisted in the party until 1965 when he decided to join the Labour Party as the only effective way to secure devolution.

His election, very soon after,  as Prospective Parliamentary Candidate for Cardiganshire was, something of a surprise but he had strong links with the county’s Labour community, his cousin Iwan Morgan having been a valiant candidate for the party in 1945 and 1950.

The election of 1966, however,  came sooner than expected but  special circumstances  conspired against the Liberal incumbent Roderick Bowen.

“Elystan was  appointed in 1981 to the House of Lords… there he became a vocal opponent of the Thatcher experiment with market liberalisation and other policies.”

His once large majority had been slashed in 1964  by a local Labour farmer, D J Davies and his decision to accept the Deputy Speakership of the Commons alienated a large number of voters who accused him of propping up Labour.

After a vigorous and energetic campaign, Elystan was elected by the thinnest of margins, just 550 votes.

Within two years and despite the reservations of some south Wales MPs for whom Plaid Cymru – and anyone associated with it – was anathema, he was appointed a junior Minister in the Home Office.

This was probably through the intervention of Jim Callaghan, and the two years he served, from 1968 to 1970, were undoubtedly high points in his political career.

At the election of 1970 he increased his majority to 1200 and although the defeat of the Labour Government brought his ministerial career to an end, he continued to serve on the front bench and was also elected Chair of the Welsh Parliamentary Party.

In the first election of 1974, however,  when Labour was returned to power, Elystan lost his seat and it is significant that a procession of Labour ministers made their way to Cardiganshire to secure his return, including Harold Wilson himself.

Despite gaining more votes than previously, Elystan failed to regain his seat largely because of the collapse of the Plaid Cymru and Conservative votes which migrated, for a number of reasons, to the popular and locally born Liberal candidate, Geraint Howells.

It should be said, however, that  Ceredigion was never an obvious Labour seat; there has never been a Labour MP since, even at the height of the Labour revival in the 1990s.

After his defeat in 1974 he turned his energies to promoting the campaign for devolution which was gaining ground after the Crowther (Kilbrandon) Report, the establishment of which had been inspired by Elystan himself.

At the same time, he continued to have political ambitions, and in 1978 was elected Prospective Labour Candidate for Anglesey (Ynys Môn), in succession to his friend and mentor Cledwyn Hughes.

But 1979 was not a good year.  The campaign for devolution, of which he was President and the most prominent campaigner, was thoroughly rejected by the electorate while at the General Election Labour was in retreat paving the way for the advent of Margaret Thatcher’s premiership.

In Anglesey, it became clear that Cledwyn Hughes had a huge personal vote across the political divide which was not transferable to another Labour candidate.

In addition to this, Elystan was the most prominent campaigner for devolution which had been rejected even in Gwynedd; and especially so in Anglesey.

Following his failure in the election, Elystan was  appointed in 1981  to the House of Lords to join the front bench opposition team led by Lord Cledwyn Hughes and there he became a vocal opponent of the Thatcher experiment with market liberalisation and other policies.

“He will be chiefly remembered as one of the most resolute, and eventually successful, architects of devolution in Wales.”

During the period of opposition after 1970 however, Elystan decided  to become a barrister, first joining the London chambers of Lord Elwyn Jones.  But after 1974, he joined a leading Welsh chambers at 35 Park Place, Cardiff and his career burgeoned.

However, this brought his active involvement in politics to an end, and on returning to the Lords after retiring from Bench, he was obliged to join the cross benches from where he continued to  make trenchant speeches on a range of subjects including his opposition to the 2011 proposal to reduce the size of the House of Commons.

He had regained a close association with Aberystwyth University  by his election, first as Vice President and then from 1997 to 2007 as President and in 2011 the university named the new Law and Criminology building after him, something which gave him  great pleasure.

In 2006,  he suffered a grievous loss with the death of his wife, Alwen, who had been a powerful and consistent supporter and who had  sustained him during some difficult years of challenge and disappointment.

Despite this, he strived to maintain his public service and continued as a member of the Lords until retirement in 2020 and despite periods of increasing ill-health.

Elystan Morgan was a formidable campaigner, a memorable orator and public speaker and a proponent of liberal causes.

But he will be chiefly remembered as one of the most resolute, and eventually successful, architects of devolution in Wales.

He is survived by a daughter, Eleri, a son, Owain and three grandchildren, Catrin, Lowri Haf and Daniel.

Deian Hopkin is a historian and was, in the 1970s, Elystan Morgan’s election agent and later Vice-Chairman of the 1979 Yes campaign in Cardiganshire. A graduate of Aberystwyth University, where he also spent 25 years teaching history, he eventually became Vice Chancellor of London South Bank University.