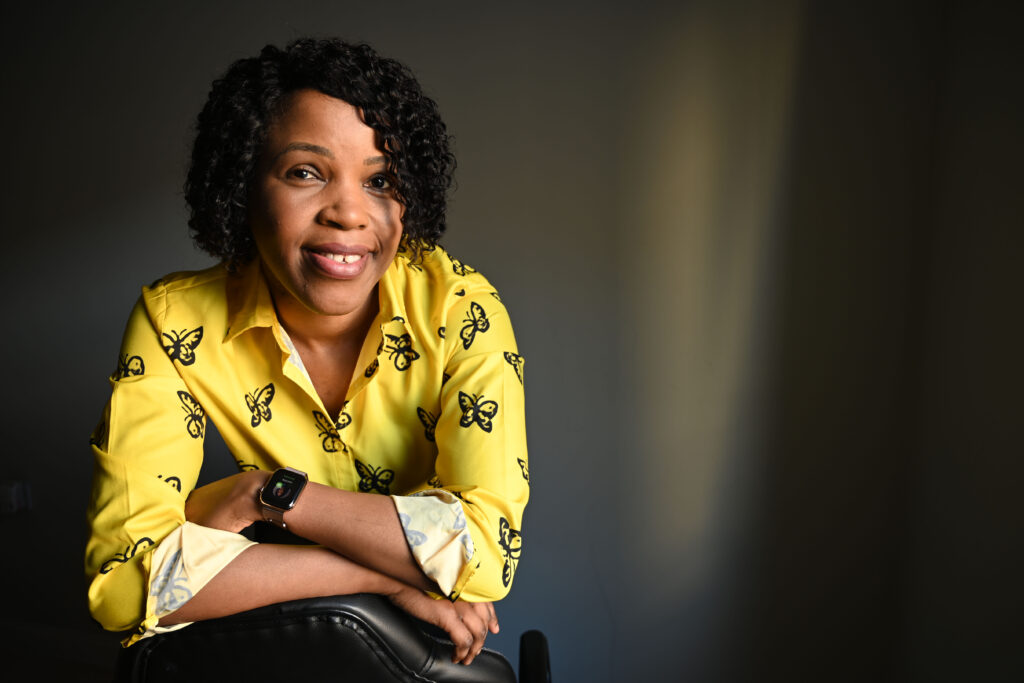 From being the daughter of a government minister in newly independent Tanzania to fighting customs fraud at HMRC and championing diversity in Wales, Pru Orridge tells her story.

I was born and grew up in Tanzania, where most of my family still live, but I have lived in the UK – in Wales – for a long time. In many ways, I was very fortunate as a child.

My upbringing was rather privileged. My father, Paul Kimiti, gave up his ambitions to be a jazz musician to work for the independence of Tanzania in the 1960s and he went on to become a government minister.

In common with about a quarter of the globe, Tanzania used to be part of the British Empire, which is why I speak English as well as Swahili. In fact, we were also once a German colony, but the First World War saw a change of ownership.

So, I had privileges, but I had challenges too. I was born with hip problems and spent quite a lot of my childhood with my legs in plaster. In time I was to have three hip replacement operations. Twice on the same hip, by the way – even in Africa we don’t have three!

When I was eighteen years old, I came to Cardiff, to complete my education. The colonial links explain why I chose the UK. I completed my studies in Cardiff and finished with a degree in Business Information Systems and a Master’s in Business Administration.

As I was approaching the end of my degree, I applied for a job with a well-known High Street retailer. I was successful at interview and received a job offer, conditional on me obtaining a National Insurance Number, which was just a formality.

I had what I needed to work in the UK and I just had to apply at a Job Centre for the NI Number.

What followed was my first real experience of the Civil Service. Sad to say, it wasn’t a good one. I went along to the Job Centre and explained what I wanted.

I was told that jobs like this weren’t for ‘people like me’. The gentleman there advised me to look for work as a cleaner or in a care home. This wasn’t in the 1970s, by the way, it was in 2000.

Of course, now I would complain bitterly if I were treated like that. Then – young, inexperienced and still relatively new to this country – I left the Job Centre without my NI Number and never got to work in retail.

My privileged background and, more relevantly, my advanced education meant nothing to this man. To him, I wasn’t fit to work in a shop.

It wasn’t quite my first brush with racism – as a student I had the usual low-level stuff like being followed by store detectives – but it was the first time that racism materially affected my life. It was quite sobering for me.

My privileged background and, more relevantly, my advanced education meant nothing to this man. To him, I wasn’t fit to work in a shop. Why? Well, all he knew about me was the colour of my skin, my foreign birth and my accent.

That was a setback for me, but I did manage to find work – and a NI number! That’s a story in itself. Taking the ‘advice’ I received at face value, I applied for and obtained a job in a care home and was given my NI number with no questions. I gave that job up rather quickly and applied for one I actually wanted.

That wasn’t the greatest introduction to the world of work, but I quickly realised that many people were far worse off than I was.

I worked as a translator for a while, attending people who, like me, came from East Africa but who didn’t have my advantages. I also took a job teaching IT to people who, again like me, had come to this country and were trying to make a life here. It was while I was doing that job that I made what proved to be a significant decision.

In 2005, I joined the Civil Service! I’ll admit that it didn’t feel significant at the time. I took an evening job as an Administrative Assistant (AA) with Her Majesty’s Revenue and Customs (HMRC) on a six month contract. The idea was just to make a little extra money while I was still working my main IT job.

Of course, it didn’t work out like that. My temporary contract was extended, and I became an Assistant Officer (AO). I gave up my other job and my career in the Civil Service began. Why did I make that move?

Well, I found HMRC to be a great place to work. I made friends and the work became interesting. I say ‘became’ because my first job was stuffing envelopes and sticking them down. Even that was fun, since I had good colleagues and I was quite the artist with the damp brush!

I used to work out different ways of wetting the gum on the envelopes.  Fortunately for my sanity, I quickly moved to more challenging roles. I won’t go into details about my different jobs, but I will say that I found HMRC a very welcoming place. I had great colleagues and very supportive and friendly managers.

I initially progressed quickly. I became a Band O manager in 2007, so that was two promotions in two years. Unfortunately, there my career seemed to stall. I didn’t sit back. I changed roles and even retrained completely to become a compliance caseworker.

So, how I eventually broke through my personal glass ceiling.

Well, in 2013, I met my mentor, Colin! I was working as a Band O caseworker enquiring into the tax affairs of the very wealthy and having my usual lack of success with job applications.

I heard that one of the Senior Leaders in the office had helped other people. I approached him for assistance with an application and he agreed to help me. I wasn’t immediately successful, but we continued working together and my applications certainly improved. It wasn’t too long (in March 2014 I got my HO promotion) before I succeeded in an application for an Higher Officer (HO) post. It involved retraining again, and I moved into customs work.

There was a lot for me to do for a while, and we now worked in different parts of HMRC, but I kept in touch with my mentor and he has continued to support my development through two further promotions. I was promoted to Senior Officer (SO) in 2018 and in 2021 I became Grade 7 – Customs Fraud Lead in the Fraud Investigation Service.

So, what was it about his help that made the difference to my career?

At first, we only worked on job applications. I think the difference he made there was to the presentation of my examples. Maybe it was that English wasn’t my first language, or just that he brought different and wider experience of drafting, but he certainly helped me present my examples to their best effect.

Since then, Colin has helped my development in many ways, going far beyond job applications. He has been a mentor, a coach, a sponsor and I would say a friend.

I currently work in the world of Customs. I have had several roles and the last one, strangely, took me back to my origins.

I learned that a small team was visiting Namibia, Madagascar and, yes, Tanzania to run workshops on HMRC’s approach to Customs compliance.

That was an amazing trip. Apart from the fact that travelling at someone else’s expense is great, it was fantastic to see how other Customs authorities worked.

Another role that I currently fill is that of regional lead for HMRC’s Race Network in Wales. It allows me 20% of my time to work on race equality issues. I applied for the role about two and a half years ago. Once again, it turned out to be a very different gig to the one I was expecting.

I had quietly started to build the profile of the network in Wales when the tragic murder of George Floyd happened in America. Of course, this was followed by the Black Lives Matter protests across the world and suddenly race equality work was at the forefront of everyone’s minds.

That, of course, was a very difficult time for many of our colleagues. Our network held a listening event where colleagues shared their feelings and their experiences of discrimination. I think it was very cathartic for people, who had previously felt unable to speak.

A meeting that was scheduled for an hour lasted for over three hours. The experience was very raw and emotional, with people discussing what were in some cases traumatic experiences of discrimination, inside and outside work.

Out of that and similar conversations, we identified that the main concern of our race network members was a perceived inability to progress in their careers, which resulted in a lack of representation at grades HO and above.

This, if you remember, had been my experience. I’d found it very difficult to progress beyond Band O. I was Band O grade from 2007 until March 2014.

One of the saddest things I heard from Black colleagues around that time – and I heard it a lot – was that there was no point in them applying for jobs because ‘Black people don’t get promoted.’

I can see where they were coming from but that attitude, of course, becomes a self-fulfilling prophecy. The surest guarantee of not getting a promotion is if you don’t apply!

In just two years Black, Asian and Ethnic Minority representation at HO in HMRC in Wales increased by over 40%. We saw smaller but still significant increases at SO and Grade 7.

Well, here in Wales, in partnership with HMRC’s Regional Leadership, we set up mentoring circles for anyone from an ethnic minority, where senior leaders shared their experience with 8 or 10 people.

We also established one to one sponsorship for ethnic minority colleagues at HO and above, each with a Senior Civil Servant sponsor.

In just two years Black, Asian and Ethnic Minority representation at HO in HMRC in Wales increased by over 40%. We saw smaller but still significant increases at SO and Grade 7.

In June 2022,  I was thrilled to receive an MBE in what turned out to be the Queen’s final Birthday Honours. What made it very special was that I was nominated by colleagues for my services to diversity. That my colleagues felt that I deserved recognition for work that is very important to me is just wonderful. Of course, my family (especially my parents) are absolutely delighted too, which is also very important.

What I didn’t expect was the reaction from the Tanzanian community in the UK and back home. I have been overwhelmed with messages of congratulation and many have been kind enough to say that they are proud, and that it reflects well on Tanzania. That’s great to hear, as I am very proud of my roots.

Well, I think it will help raise the profile of the work I do, which would be a fantastic outcome. I try to keep the issue of equality in people’s minds. Hopefully, the wider community benefit from fairer treatment if those who make decisions remember to think about equality issues when they make those decisions.

Maybe also the honour will show people that work of this kind is valued, even though it can be very difficult.