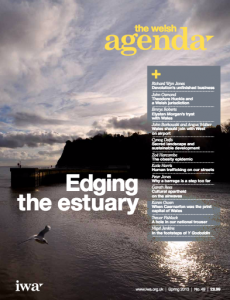 Where minorities meet in the heart of Europe

Outlook: A Metro for the Cardiff City region

Economic opportunity rather than rights critical for language survival

Howard CArter and John Aitchison find there are now more Welsh speakers in Cardiff than in the whole of Ceredigion, Gwynedd and Ynys Mon

Nationalist politics in the 1960s

The real story behind Tryweryn and the Investiture

Wales and West should join forces on airport

Putting Cardiff at the heart of the Welsh economy

The other side of the tracks

Lizzie Swaffield, David Egan and Danny Saundersreport on an initiative to improve school attainment in Merthyr and Blaenau Gwent

All we need is English n’est-ce pas?

Katie Harries investigates the extent of human trafficking on our streets

Why a barrage is a step too far for the Severn

Cultural apartheid on the airwaves

When Caernarfon was the print capital of Wales

Fishlocks File: Word slingers who can make a corgi laugh

In the footsteps of Y Gododdin

Nigel Jenkins looks back at the life of poet, translator and literary critic Tony Conran

A man of superior parts

How yr Wyddfa enters the soul

What Wales can do for a poet

Who can pass the toga test?