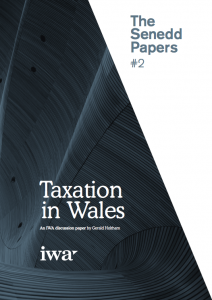 Rather than  considering only the new taxes at its disposal, the Welsh Government should take an integrated view of all its tax powers and make radical changes to Council tax in Wales, according to the distinguished economist Gerald Holtham.

In the latest of the IWA’s Senedd Papers series the author of the widely respected Holtham Commission report, calls on Welsh politicians to make a series of changes to tax powers already in their control to make them fairer and more efficient:

“At present Council tax is regressive in property values, going up more slowly than house prices across the range. In Wales in 2013 the average council tax on the lowest band, where properties are worth up to £44,000, amounts to nearly 1.9% of the value of the property. That falls to nearly 1.5% for properties in the range £44,000-£65,000 and it goes on falling for more expensive properties. For properties worth over £424,000, the tax is just over 0.5% of capital value.The council tax could be reformed to make it fairer”

Gerry Holtham, a Fellow of the Institute of Welsh Affairs, says policymakers need to think about tax powers in a joined-up way.  Council tax on more expensive houses should be raised to help the majority of homeowners, he argues. Along with a cut in stamp duty, and the abolition of the council tax discount for single occupants, that would produce a fairer and more dynamic tax regime in Wales. Holtham suggests:

“Up to now the Welsh Government has not had to give any thought to taxation, just spending its block grant. It could lead on the reform of council tax, making it less regressive. It could use changes in council tax to fund a necessary reform of Stamp Duty on landed transactions.

In general, Wales has the opportunity to improve its own tax system and blaze a trail for the rest of the UK”.

You can listen to the launch event here: http://www.clickonwales.org/2014/05/reforming-council-tax/