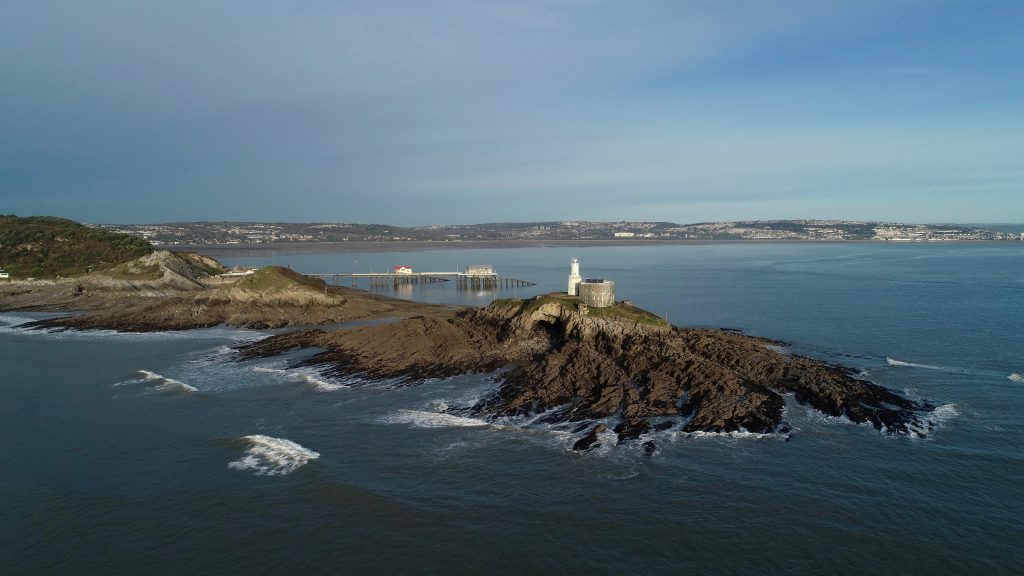 In this account of the strange way Wales began to follow her, Marie Darrieussecq urges us to live every second.

The first time I went to Wales was twelve or fifteen years ago. I was invited to the Hay Festival. I remember a country of mist and mountains. I didn’t speak English very well, and the mist was in my brain too. Exhausted by my linguistic efforts, I rudely turned my back on the two elderly people who were getting into the taxi home with me. They kept proffering biscuits and offers of conversation, but I hardly answered.

Yes, I was writing novels. They insisted. What kind, etc.? ‘And you? ‘I asked in desperation. ‘We do a little bit of theatre.’ ‘What are you staging?’ I continued out of politeness, hoping I could stop there. ‘Oh, a little Shakespeare,’ said the old gentleman. ‘And texts from ancient India,’ the old lady added. I sighed inside. Probably old hippies, amateurs, a provincial troupe. But they were just so nice, Natasha and Peter – we finally told each other our first names – that we started talking about our respective arts while eating biscuits, first at the station waiting for the train, then on the train, then to London, until I understood that they were Natasha and Peter Brook.

Peter Brook’s Tempest, which I had seen at Les Bouffes du Nord in Paris when I was twenty years old, had determined my whole relationship with the theatre. I had learned that you can depict a forest by simply holding a bamboo stem in your hand. They were also the ones who gave me my first visions of India. The Brook Theatre had been as strong for the young spectator that I was as my discovery of the New Novel had been for the young writer who was growing inside me.

Years later, I thought about Peter and Natasha again when I left for Wales in May 2017. I had been invited to the Volcano Theatre by Tom Cheesman, in his World Voices programme, and to Swansea University by Catherine Rodgers, who wanted to talk about translation with me and her students. We had an extremely warm evening, in this theatre that is appropriately named, with an Indian poetess, Mamta Sagar, and a wonderful Welsh harpist, Caradoc – the first real Caradoc I have ever met in my life. Tom had also invited several of those travellers known as migrants. The delicious food was cooked by a young Pakistani woman, and I had a long talk with an Ivorian.

The whole world was at the Volcano Theatre. With the young Ivorian it was a pleasure to speak French, finding again the music of this accent from the Ivory Coast where I had spent some time around 2002. He had arrived via the coast of Senegal to the Canary Islands in a small boat, then had been sent to Madrid then England and finally to a hostel in Swansea, by the random nature of social services dispersals. He was quite comfortable there in Swansea. ‘Here they have money. It’s a good place to do business. But they’re crazy. I’ll tell you what: here, they’re either drunk or they’re crazy’. And between Francophones, between former coloniser and former colonised suddenly allied against the ‘crazy and drunk’ mass of Welsh people from the Volcano, we laugh like crazy, quite drunk as well ourselves.

People drink a lot in Wales. And as soon as there is a ray of sunshine, they also eat a lot of ice cream. The next day, my husband and I rented a car and went for a walk at Worm’s Head. A board under the coastguard’s hut warned of the dangers of cliffs, waves and tides, and listed all the accidents recorded over the years. Falls, suicides, drownings, disappearances. The last incident reported a ‘lady bitten by a seal’.

You go somewhere, and the country follows you when you go home. As in love stories: you see the person everywhere, such and such a detail reminds you of them, their first name appears in books, their origins suddenly fascinate you. I saw Wales all over the place when I came back.

But that’s not exactly what I want to talk about. I think that if I am writing this text, if I am trying to tell how Wales began to follow me, in an unexpected way, when I returned to France, like a ghost, it is because of what happened to Bernard Hoepffner.

I met Bernard Hoepffner several times over the past twenty years. He had a very warm, though somewhat disconcerting, way of giving you a great big hug and resuming the conversation where it had left off months or years earlier, when we had only known each other a little. A prodigious memory. And a friendly energy that made us friends. He had a striking physique, attractive, dry, lean, with earrings and often wore Breton stripy tops. A very clear voice. He was a precise man. Bernard Hoepffner was a great translator. The last time I met him was in Saint Nazaire, at the harbour. He’s a man I’ve always associated with the sea. Bernard was building a delicate bridge between English and French, a precious, unique, poetic and obstinate bridge, and this bridge has broken.

It was while I was in Wales, happy with my Volcanic friends, that Bernard Hoepffner disappeared into the sea at Saint David’s Head. And I didn’t find out until two weeks later, after I returned to Paris.

I remembered the list of ‘incidents’ at the coastguard’s hut, and it did not appear to me in the same way. Each of these people was a real person with their story, pulled behind them like a thread, which had led them to this last day on the cliff.

And for Bernard, the story – if a story is what our lives become when others tell it – the story began with his leather jacket placed below the cliff. ‘A coat, believed to belong to the man, was found containing money but there was no form of identification’, as the BBC stated. A man had been reported in trouble in the sea by two eyewitnesses.

“Dyfed-Powys Police said it was ‘urgently trying to identify the man, to build a picture of his activity leading up to Saturday and to make contact with his family’. He has been described as white European, aged in his 60s, of lean build, with a long face, short hair and distinctive white-coloured eyebrows. He was wearing a dark coloured day rucksack, dark blue/black trousers and a dark blue long-sleeved shirt or jumper. Police said, based on his accent, that he was not thought to be from the UK.”

When the link was made between Bernard’s disappearance and the man in trouble in the sea, his daughter Chloé met the two witnesses. She wrote her account on a website dedicated to her father. Bernard’s brother Jacques thinks he wanted to go fishing in this place he knew well. He had lived there as a younger man—in a former German submarine surveillance base. A wave may have swept him away. Both witnesses saw a man swimming very slowly in a small inlet. The water was calm but very cold, which according to the police explains the slowness of the movements, due to hypothermia. The man answered their question whether he was all right: no. The two witnesses tried to help him but they could not reach him, and by the time they alerted the emergency services, the man had disappeared.

Chloé writes: ‘It was Bernard, he was without his glasses and was wearing all his clothes and a backpack. They say there was a lion’s mane jellyfish swimming next to him. This struck me because the last gift I gave Bernard in March was a pencil drawing of a jellyfish. He turned his head to look at them but I think that, without his glasses, he couldn’t have seen anything but moving shapes. The water in the inlet was very calm.’

Jacques writes: ‘This place was particularly dear to Bernard because he had stayed there for a long time, during the 1970s, after leaving London. There he discovered the sea in all its might and really began his exploration of the English language and literature, beginning with Joseph Conrad. I was lucky enough to spend some time with him there, when we would fetch books from the Haverfordwest bookshop, go down to the waterfront to fish for sea bass and mackerel, precisely where he disappeared, and then spend the evening cooking, drinking and talking. These moments spent with him in the observation post surrounded by windows overlooking the Atlantic are some of the most memorable moments of my life. Bernard’s disappearance in this very place carries, for me, a profound meaning. Maybe he’s with Captain Nemo looking through the mirror and drinking an aged whisky with Robinson Crusoe and the Flying Dutchman.’

There is a stark contrast between the police and newspaper reports and these accounts from his daughter and brother. Bernard’s story. Later, other relatives who came to pay their respects to him at Saint David’s Head said they saw an enigmatic and large bubble rise from the water and then fly away at the place where Bernard, slowly, had swum.

His body was found in north Wales a month after his disappearance.

Bernard Hœpffner was self-taught and a translation genius. A scholar, he had probably read every one of the twenty-five thousand books in his impressive library. He took part in the ambitious new translation of Joyce’s Ulysses, he also translated Mark Twain and The Anatomy of Melancholy. He was not intimidated by any text, on the contrary: he was a mediator, and had no time to waste on books that did not pass a certain literary threshold. As a younger man, he had cultivated a plot of land in the Canary Islands. The locals called him ‘el loco’, the madman. The last time I saw him he had a lion’s mane, bleached.

There is a link that I can’t make between the style of the news item and Bernard’s style. We can all die in a news item. And we can all die a lonely and cold death. Enigmatic. A little romantic, too. The place of his death suited him well, if you can put on death like a cape for the afterlife, a cape more or less made for yourself. It was too early for Bernard, but among the places where he had lived, this cliff was his home.

This is how countries are shaped: for me Wales was, by chance, Peter Brook, and now it is Bernard Hoepffner’s country, one of his countries.

He left us with this gift that the dead give us: they remind us that we are alive. They whisper to us from where they are: Live. Live. Live every second. Do not weep, and live. But also, as Dylan Thomas writes: ‘Rage, rage against the dying of the light’.

Photo by Mike Straw on Unsplash

BELONGING TO WALES / PERTHYN I GYMRU is a new series featuring extraordinary stories from ordinary people across Wales and beyond.

The first four contributions are taken from an e-book of multilingual stories about arriving in Wales by Meltem Arikan (Turkish), Marie Darrieussecq (French), Edin Suljic (ex-Yugoslavian, English), and Jörg Bernig (German) – with English and Welsh translations. These texts were commissioned by Dr Kathryn Jones of Swansea University’s Department of Modern Languages, for the AHRC-funded research project ‘European Travellers to Wales 1750-2010’ at Bangor University.  Reader responses on these stories are welcome. Email [email protected]

We are also actively seeking submissions to the series. Email [email protected]

Marie Darrieussecq is an award-winning French novelist. 'Ghosts of Wales' was translated by Kathryn N Jones.