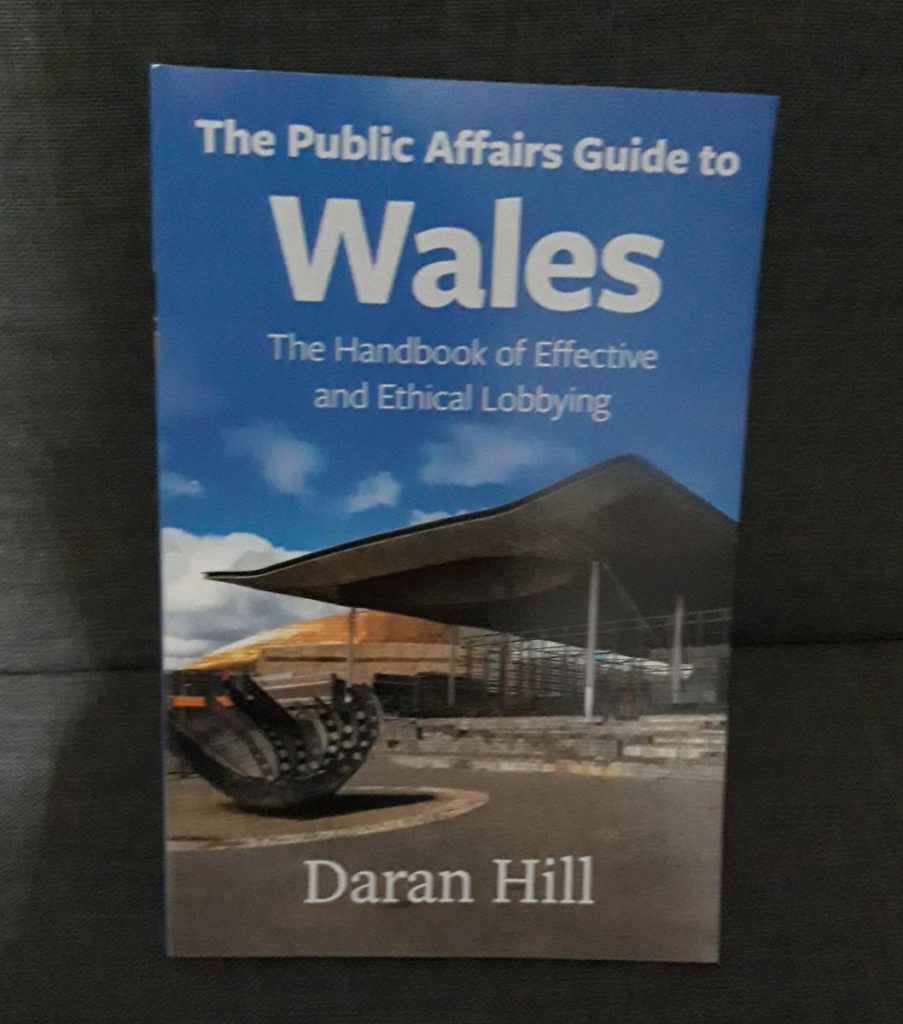 Daran Hill’s book goes some way to explaining the role of lobbyists whilst clearly showing why public affairs should play a role in modern politics, writes Hefin David.

Like it or not, lobbyists are an integral part of any political system. They are maligned by some for giving already powerful interest groups privileged access to policy makers. Indeed, there are lobbyists, such as the one representing the wealthy big housebuilders, that should be avoided wherever possible.

Others though, provide a source of research and information that makes it much easier for a backbench AM to hold the government to account. This enhances the ability of a politician to represent the interests of the many.

It is therefore welcome that Daran Hill’s new publication, ‘The Public Affairs Guide to Wales’, makes reference to ethical lobbying in its subtitle. Ethical lobbyists care about the matters they seek to influence and are passionate about guiding changes to policy for the benefit of society.

Lobbyists for example, gave me initial access to senior staff of Arriva Trains Wales, which subsequently led to some additional peak time carriages on the line that runs through my constituency. They helped my understanding of autism and how to advocate effectively for those with the condition. Their activities led directly to an Assembly committee inquiry into the value of degree apprenticeships and putting vocational education on a par with the academic.

Different lobbyists take different approaches to their work and their results are mixed. Daran Hill’s book is timely and outlines the positive effects of lobbying and acts as a guide to best practice. Too often I’ve met an interest group to discuss a matter of concern to my community, only to spend a significant portion of the meeting explaining to them how to approach different strands of the Welsh polity in order to advance their worthy cause.

A clear and contemporary guide to the workings of devolved governance is needed and Hill provides it. He explains the mechanisms of government and Senedd, crucially explaining the difference between the two. He explores committee work, the crafting of legislation and the daily political agenda. I found particularly useful the discussion of which politicians should be approached and why.

I get around 150 emails a day. A large number from interest groups are almost universally deleted unread. As Hill says, Assembly Members focus on a relatively narrow range of issues in order to make the best use of time and the biggest difference to those they represent. I’m usually working on around three or four campaigns at any point and I need clear and concise briefings on issues associated with the matter at hand. I don’t need to know that the Royal Ferret Society has just held their 75th anniversary AGM.

Hill makes much of the need for organisations to get to know the politicians aligned to causes in their area of interest. Indeed, he identifies specific ‘types’ of politicians who are more likely to be approachable in this regard. He makes the crucial point that approaches should be personalised and ‘stratified’ so that relationships can be built. It is vital that foundations of trust between interest group and politician are created so that reliable information can be shared.

When I was elected, I made a decision not to ask any ‘patsy’ questions in the Senedd, such as ‘would the Minister explain why this Labour Government is so caring compared to the heartless Westminster Tories?’. I think challenging questions from government backbenchers are more effective and I know that, while they may occasionally cause ministers some frustration, they are more likely to lead to action.

Perhaps controversially, Hill examines the ability to influence the choice of questions by backbench members. He explains that interest groups may work with a backbencher to table a question. In my early days, I was perturbed by this, putting such questions in the same category as the ‘patsy’.

However, with time I have come to understand the benefit of using the extensive expertise of interest groups, usually developed well before I was elected, to ask probing, pertinent questions that often highlight discrepancies between policy and practice. It is helpful that a light is shone on this approach, as Hill does, in order to debunk conspiracy theories and remove any mystery.

There remains unease among some Senedd politicians about the pervasiveness of lobbyists and concerns about their accountability. A recent motion called for the Welsh Government to introduce a register of lobbyists in Wales. The Government response, in my view reasonably, was that it was for the Standards Committee and the Assembly Commission (not Ministers) to work on these proposals, although the need for a lobbyist register was supported.

A clear way to resolve some of the concerns about the role of lobbyists is to create transparency about what they do and why they do it. In addition to providing clear methods for advancing causes, Daran Hill’s  book should go some way to achieving that.

Hefin David is an Assembly Member for Caerphilly representing the Labour Party.