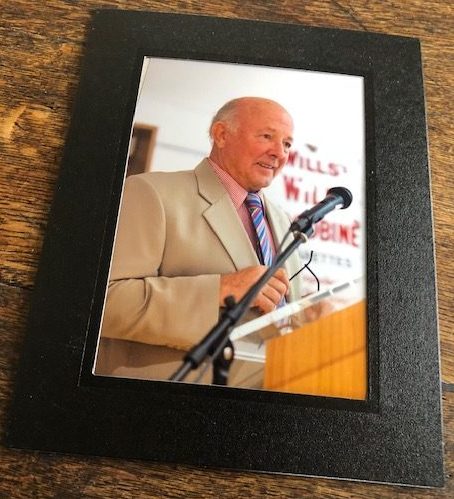 Hywel Ceri Jones pays tribute to Aneurin Rhys (Nye) Hughes, a former member of the European Commission staff and former EU Ambassador to both Norway and Australia, who died last month of pancreatic cancer at his home in Oslo.

The two went hand in hand. He had a world view of the need to promote social justice and peace. His world was Wales, and his Wales worldwide. He will be greatly missed and is a massive loss to Wales and the cause of European and international collaboration.

We were great friends for more than 60 years, getting to know each other at Aberystwyth University and enjoying parallel European careers. He was a central and constant part of my life, like brothers.   In fact, we both began to work for the European Commission in Brussels on the same day in May 1973.

Nye came to the Commission from the Foreign Office, where he had served with distinction as First Secretary in our embassies in Rome and Singapore. I joined from Sussex University.

It was a natural step for him. He had not only been President of the Aberystwyth Students Union but also President of the NUS in the UK. In the international student political world, which at that time was divided between the western International Student Conference and the Communist International Union of Students, Nye was a respected leader who pulled no punches.

In August 1962 he led a small NUS observer delegation to Leningrad where they were assigned to a hotel which was almost certainly bugged.  At the close of each day, Nye would telephone a report back to London to outgoing President Gwyn Morgan – but in Welsh! At the end of the call Nye would revert to English and bellow into the phone ‘Now sort that out, you buggers!’

Though an ardent internationalist he was, of course, deeply rooted in Wales. Born in Swansea and educated at Swansea Grammar School, he drew his core values and moral perspectives from his parents, William and Hilda. They anchored him with his lifelong Christian convictions and concern for equality and social justice for all. His upbringing gave him his sense of community, love of life and people, and an irrepressible joie de vivre.

The start of the UK’s membership of what was then the European Economic Community was an opportunity for both of us. Along with the late Gwyn Morgan, Nye and I formed a close band of Welshmen – all three, Aberystwyth graduates – delighted to be part of the first wave of senior officials from the UK in the EEC.

Nye was thrilled to have the chance to play a part in the unique European project – the first transnational venture of sharing sovereignty on the global stage, with its overarching commitment to peace and reconciliation. Alongside that – as a lifelong Plaid Cymru member – he passionately wished Wales to be an integral and active part of this historic initiative.

Nye first worked in the Commission’s central secretariat under its formidable Secretary General, Emile Noel, who was a complete master of the internal politics and knew the European integration challenges inside out.   This central role provided an important formative period to help build Nye’s grasp of European policies and personalities and stood him in good stead for his later appointments.

He was also the natural person to be seconded as the Commission’s anchorman in Wales during the 1975 referendum on Britain membership. His office was based in the Angel Hotel, opposite the Cardiff Arms Park.

He loved the cut and thrust of the many debates at conferences, on television and on radio, at which he would display his debating prowess with great force. We were all delighted in the clear commitment the UK then gave to a European future.

Later, in the 1980s, we both ended up working for another Welshman, Ivor Richard, the Commissioner in charge of employment, social policy, education and training.  Nye was his Chef de Cabinet, while I led the Directorate charged with merging and developing education and training policies.

They were very challenging times as Margaret Thatcher was ferociously opposed to European proposals on social and employment policy. Nye was always at Ivor Richards’ side fighting the battle to promote greater social justice and equal opportunities across the continent.

Not long after Ivor Richard’s departure, Nye left Brussels in 1987 to become the EU’s Ambassador to Norway and Iceland, and eight years later Ambassador to Australia and New Zealand, a post he held for seven years.

In Oslo he was a key figure in their intense referendum on the proposed Norwegian membership of the EU, known for his articulate and well-informed advocacy. Despite Norway’s rejection of membership, Nye earned wide public respect.

Following Norway, Nye was appointed as the EU’s Ambassador to Australia and New Zealand.   This gave him the opportunity to further develop his contribution to promoting the role of the EU in the world, and led to his growing interest in political developments in South East Asia.

But in Canberra many knew and referred to his European Commission residence as the Welsh Embassy and, although no relation, he later wrote a biography of Billy Hughes, the Welshman who became Prime Minister of Australia.

Everyone who met Nye would remember his great vitality and huge energy as well as his infectious spirit of openness and comradeship. He was a great friend to have at your side, always positive and constructive in finding solutions.

Wherever he went he was known for his passion, and for his humour. He was a powerful speaker who loved the cut and thrust of debate and argument, and had very strong convictions on the special value of European integration and Europe’s role on the global stage. That sat side by side with his deep love of Wales and its language.

We both shared a delight in the quality and intensity of the Welsh literary and musical scene, that we had both been steeped in. Nye never missed a National Eisteddfod over 50 years.

During these last years of his life Nye did not take at all kindly to the misleading campaigning of Boris Johnson and other long-standing Euro-sceptics in the UK’s EU referendum, and the false myths with which they had constantly peppered the press over the past 40 years.

He fervently wished to see these distorted narratives vigorously and factually confronted, with a much more convincing narrative of the deep long-term values that underlay the EU relationship.

Nye several times contributed his analysis of the downsides of the Norwegian option as politicians in the House of Commons scrambled desperately to identify softer forms of Brexit for the UK and its future in Europe.

He was deeply frustrated by Corbyn’s ambiguities on Europe and the unnecessary gift of a General Election to Boris Johnson. He was strongly in favour of a People’s Vote in what he considered could have been a third winnable referendum on EU Membership.

Nye was passionate in his convictions and in his advocacy of what for him were his two great causes, Wales and Europe. He argued consistently throughout his life for recognition of the rightful status for Wales as a distinct nation within Europe and the world.

He was also acutely aware of the weaknesses in the fragile intergovernmental cooperation within the UK, and supported initiatives to promote equality of esteem between the nations of these islands. He was a long-standing critic of London-centric governance.

For all these reasons he was saddened by the Brexit outcome and was deeply concerned by the damage he knew its negative effects would wreak on Wales economically, socially and culturally.

Till his last days, Nye told me he hoped we would still be able to make it to Tregaron for this year‘s Eisteddfod. Soon after, he died on March 27, little knowing that COVID 19 would trigger the cancellation of all events.  As we are all now self–isolated in this pandemic, and surrounded by many examples of community solidarity, we have the exceptional chance to be still and to reflect on life and its meaning.

Fundamentally, family and friends find first place at this profoundly challenging time.  I feel privileged to have had my lifelong friendship with Nye and will treasure it as a force within me for the rest of my days.

Losing a friend like Nye is like losing a limb. We have all lost a great Welshman and a great European.

Nye Rhys Hughes: Born in Swansea in 1937. Educated at Swansea Grammar School and Aberystwyth University where he studied philosophy and Celtic Studies. He joined the Foreign Office in 1966 and the European Civil Service in 1973. He was EU Ambassador to Norway and Iceland (1987-95) and to Australia and New Zealand (1995-2002). He leaves a wife, Lisbeth, and two sons, Elis and Sion, by his first wife, Jill, together with grandchildren and his sister, Delyth.

Hywel Ceri Jones is a former Director General with the European Commission and creator of its Erasmus Programme.