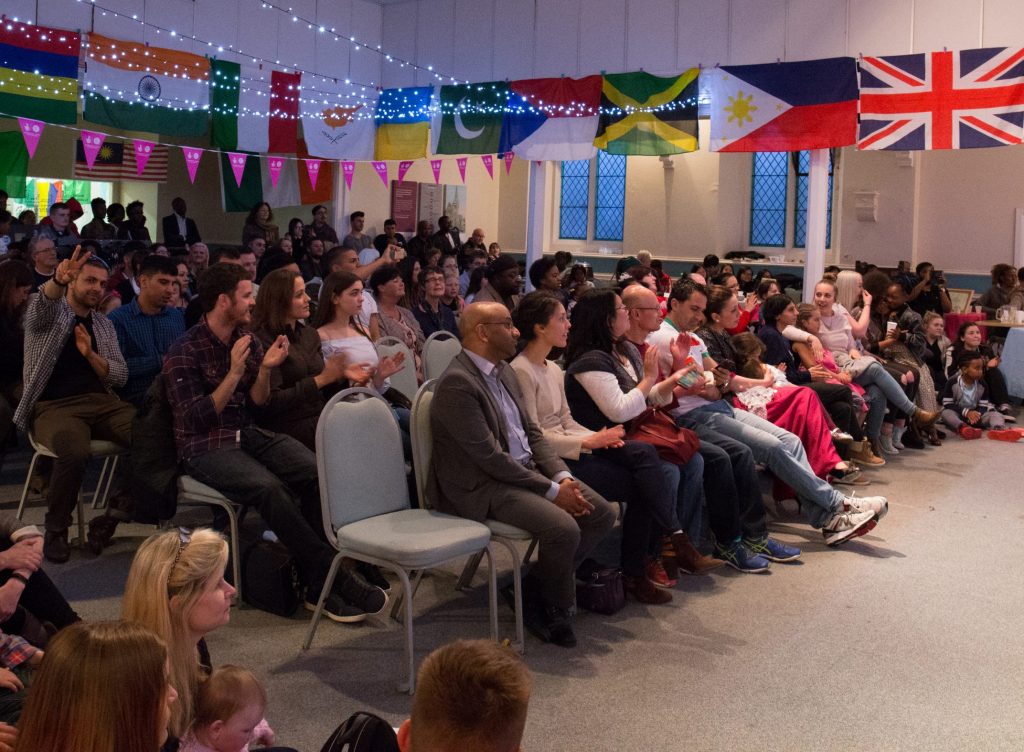 Mark Seymour recounts the story of how the arrival of asylum seekers in Newport birthed a community project that now has two full time staff.

In 2004, a change of UK Government policy led to asylum seekers being dispersed to a range of cities across Wales, England and Scotland.

Previously, they had mostly been housed only in London and the south east of England – the most expensive part of the country for accommodation. Since then, in each dispersal city, small, local grassroots community groups have slowly grown as settled host communities reached out in friendship and support to asylum seekers arriving in their cities. They provide friendship, support, activities and opportunities to learn English. All are independent, unique and personalised to their own particular set of circumstances.

In 2005, some Eritrean asylum seekers dispersed to Newport, who were Pentecostal Christians, started attending Bethel Community Church on a Sunday morning. My wife Claire and I befriended them, and Claire began to meet two of them each week for coffee in the Church’s community centre.

Soon other Eritrean women began to join this weekly gathering, and it soon expanded into a weekly women’s group, giving informal support to asylum seekers, as well as friendship and inclusion in activities at the Church.

As numbers grew, the project was formalised in 2008 by Bethel Community Church, and launched as the Sanctuary Project. In 2011, I stumbled into a funding opportunity and we were able to employ one of the volunteers, Sarah Croft, as a project coordinator. This investment into a part time member of staff grew the project further.

It opened over three days and one evening, providing drop-in sessions, English classes and occasional trips and visits. Participation is at the heart of the project – everyone brings what skills they can to the group, regardless of who they are.

We do not use the term ‘service user’ ‘ – we much prefer ‘project participant’, which more accurately reflects the approach that the Sanctuary takes. People grow into volunteer roles as they join the group, and their contribution depends largely on their existing skillset. Some project participants are asylum seekers or refugees; others are from the host community.

Sanctuary has always put the needs of people before the needs of the project; it has always been flexible and adaptable – which can sometimes feel a bit chaotic. But one size does not fit all, and relationships are at the heart of everything. We continued to be faith-based but not faith biased – the project was always open to people of all faiths and none.

Under Sarah’s capable leadership, the project continued to grow until it became clear that it could no longer meet the demands required, so the decision was made to set up a separate charity – The Gap Wales. Part of this decision was an administrative one – the project had outgrown the umbrella of Bethel Community Church Trust. In addition, it was felt by the core team – Sarah, myself and Claire – that we needed to expand our staffing in order to meet the needs of the refugee communities of Newport.

So, at the start of 2018, I left my job as a primary school teacher and joined the staff full time as Project Manager, Sarah role expanded into a full time post working with refugee teenagers aged 14 to 19, particularly Unaccompanied Asylum Seeking Children (UASC) in the care of a local authority (Newport has the largest concentration of UASC in Wales, with over a third of those in this category in the care of Newport City Council).

During the last two years, Sanctuary has been open five days a week and three evenings. We currently run weekly 5-a-side football and netball sessions, in partnership with Newport Live; badminton; a women’s exercise class; weekly English classes with a creche; an allotment where our own fruit and veg is grown; a weekly bike repair and recycling scheme that currently gives away fifteen bikes a month to asylum seekers, and repairs another fifteen, and a weekly community lunch, cooked by a volunteer team.

A couple of years ago, our host’s building, Bethel Community Church, was targeted with threatening Neo Nazi posters and swastikas.

Another group of volunteers provide a free weekly haircut. A regular youth drop-in, a women’s group and a men’s games night are also popular weekly activities. Nearly all the volunteers are asylum seekers or refugees bringing their skills and talents to support others within the refugee communities of Newport.

As a community based project, we ask people to bring what they can to the project. We find it difficult to quantify our volunteer base, as there is such a blurred line between volunteer and participant. On average, 32 people a day access the project, an average of seven for advocacy and support sessions that are managed alongside the ongoing participatory activities detailed above.

Costs are kept to a minimum. This is partly out of necessity: we are an unpopular cause in a relatively poor, heavily Brexit-leaning city. There are few administrative running costs, with money mainly invested in our two full time staff. The other cost is for trips and visits, which are always popular, from coach or minibus trips to the mountains or beaches of Wales, to historic and cultural attractions such as Big Pit or a Welsh castle.

As a small local project we are very rooted and known in the local community, who often help us out with requests that we post on local and social media. Our partnership working is key – we will signpost into other specialist agencies most of the time, and where other specialist agencies have access to funding, we often bring the people who benefit from their more specialist skills, achieving outcomes for each group.

Many of our project participants describe the Sanctuary as a place where they can forget the challenges of their case, and get away from the boredom and isolation of their shared basic accommodation. The needs here are not survival, like the refugee camps across Europe and North Africa or the Middle East, as people have their survival needs met through the asylum system which provides them with accomodation and a limited weekly income.

Rather, the needs are of belonging, of identity, of friendship, of adapting to life in a new culture which often does not live up to the idealised dream sold – sometimes literally – back in a home country.

Being entrepreneurial is a part of the DNA of the organisation: we try to blag as much as we can, from free entry to tourist attractions and sports matches, to two free season tickets from Newport County FC (which came about when one of our guys was so desperate to see them playing he climbed a tree overhanging the back gates to the stadium!), to a regular free loan of a minibus from a local church, to requesting specific items needed by the project or individuals participating in the project.

We rely heavily on donations, gifts and fundraising for our trips and activities and support – Hay Brecon and Talgarth Sanctuary for Refugees are often able to support us with specific financial needs; they also host regular ‘away days’ – trips to the countryside, and along with Abergavenny City of Sanctuary, regularly deliver donated bikes to the project.

Our friends and family regularly donate to the project; friends purchase bikes from us which then finance the consumables needed to repair the other bikes (chains, inner tubes, cables), local Facebook groups respond quickly to specific needs of individual participants.

Partner agencies, like Newport Live, deliver and pay for some of the sessions. We work in parallel with similar-but-different refugee community groups in nearby cities (Oasis in Cardiff and Bloom and SASS in Swansea). Our relational, networking approach also applies to how we finance and meet the ongoing needs of the project and the communities that we partner with.

There are challenges: managing diverse needs; getting paperwork completed; organising and communicating; accounting for money; communicating with a highly transient group of people (although often not as transient as they should be due to the ongoing bureaucratic chaos of the Home Office).

Many struggle to communicate through English – the only language that our staff speak, and organising interpretation for often simple conversations can be a challenge too. We also have to empower our fluid and ever-changing teams of volunteers, while ensuring that expectations of newly arrived – and newly granted refugees – are realistic, and explaining how things work in the UK.

The realisation that the journey does not end with the issuing of a Biometric Residence Permit (the sought after BRP card), and that there are many more new challenges ahead, can be difficult. We fight systemic injustices daily, particularly the unpleasant and often intimidatory Home Office with its chaotic approach and underpinning Hostile Environment.

It’s hard when there are no answers to give other than empathy and a listening ear. I like to think that we give hope when times are hard and that we are fighting the corner of people who may not have anybody else to do so. We always celebrate the successes because it helps numb the pain and heartache of the failures and refusals.

A couple of years ago, our host’s building, Bethel Community Church, was targeted with threatening Neo Nazi posters and swastikas, which we quietly photographed, reported and painted over. We were quite glad to be regarded as enemies of Neo Nazis.

Our refugee communities are now often choosing to stay in Newport; we have recently signed 10 year citizenship papers, and have several refugee owned businesses in the city. Despite a strong anti-immigrant feeling that persists in many quarters, and a few unsavoury racist incidents, our asylum seekers and refugees constantly express their love of Newport.

Generally, they feel welcomed and accepted by the individuals that they meet in the course of their daily life. As one of my dear Eritrean friends once said to me: ‘I like Newport; I smile at people, and they smile back.’

Mark Seymour is the Project Manager of the Sanctuary Project.