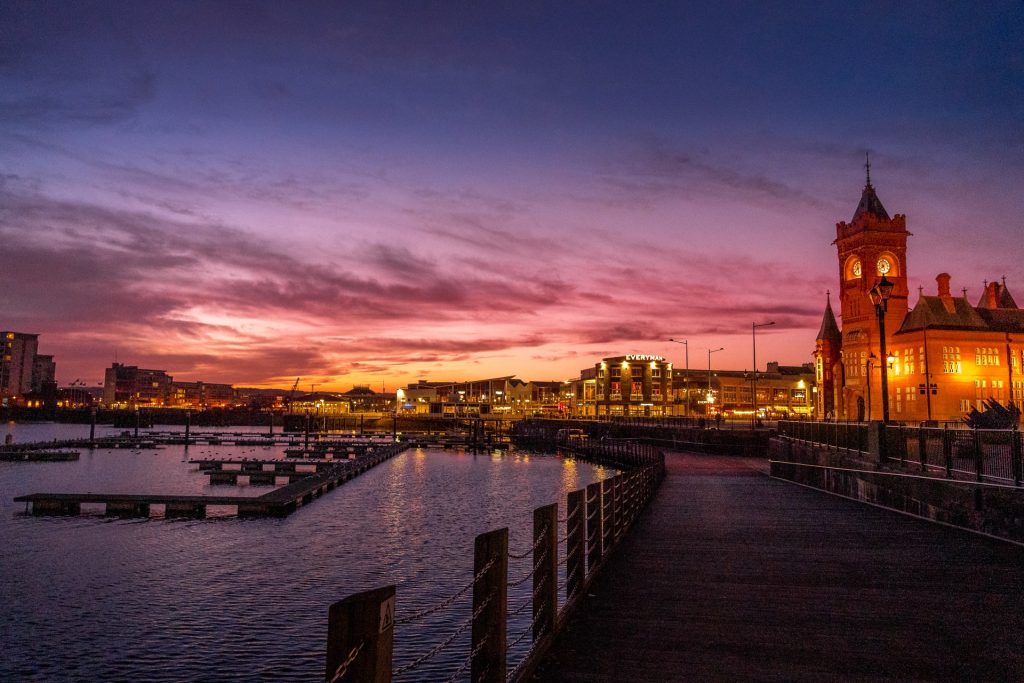 Frances Williams probes different understandings of place and how these might jointly be  brought together to inform policy making.

As a young art student, living in Cardiff in the 1980s, I remember The Docks as they used to be: before The Bay had been ‘developed’ let alone ‘re-developed’.

I wandered around Bute Town with  my sketchbook, taking in the sights of the ships and warehouses. These dark, dripping hulks  made exciting subjects for my watercolours, reflecting Cardiff’s character as port city.

There is not much left today that gives a sense of the place I painted then. Save for a few relics.  The Pierhead, Norwegian Church and Lock Keepers Cottage.

The latter building is a reminder of  the working men who used to lay claim to this territory and the tidal flow of the Taff  – over which  they once held proprietary power.

Last year, IWA published a blog which urged a fresh understanding of ‘Welsh Places’. Ellen Jones  proposed that a ‘data-driven’ approach was one that could enable ‘turbo-charged grassroots  regeneration’.

Information provided by local authorities cannot explain how particular ‘places’ operate within  localities, most particularly, one to the other. But these inter-relations are considered key in current  understandings of place, considered less as static entities but points plotted by flows (of capital and human resource).

“Perhaps this sense of being short-changed by the future is reflective of the current uncertain moment, when the devolution settlement itself is being brought into question.”

Proponents for a ‘Foundational Economy’ urge we favour the meeting of local needs over global import.

Looking at the current status of the Lock Keepers Cottage within its immediate environment of Cardiff Bay might  prove instructive here, as it has recently become the focus for contested comparisons and very  different assessments of value. This miniature dwelling may be removed as a result of being in the  way of a proposal for a new Museum of Military Medicine.

Currently based in Aldershot, a new home has been designed by Scott Brownrigg using: ‘the  concept of a ship or industrial container as the vessel to host the exhibits and artefacts’.

Offered to other cities in the UK, Cardiff City Council picked-up the project, keen to attract ‘inward  investment’ (the Treasury setting £2 million towards the venture.)

Local resident groups, however, have proven less keen on a project which would sweep away not  only the Lock Keepers Cottage but the green space that surrounds it (proven ever more valuable to them in this time pandemic, they argue.)

Indeed, the Grade Two listed building can’t be demolished. And so suggestions have been made to relocate it to St Fagans, a museum that  rescues historic buildings under threat in Wales. But while ‘saving’ them for posterity, these re-contextualisations come at the expense of their value and usefulness to living Welsh communities.

Two recent books provide useful points. Both suggest that ‘culture’ is something we collectively  perform within the ‘theatres of memory’ that heritage sites offer.

In Performing Welshness, people, memory and place (2018) Lisa Lewis explores what it means to be ‘of a place, at a certain time’, proposing culture as a continuous process of ‘performance and transaction’. A collective sense of  identity is forged among participant publics who interpret heritage sites through actively re-living  and re-imagining them, she persuasively argues.

While in Emotional Heritage (2020) Laurajane Smith offers her analysis of hundreds of interviews with people who have visited heritage sites over the last ten years across three continents. Like Lewis, she finds that such experiences allow visitors to find their own way of ‘fitting in’ to a given history.

These histories can sometimes stand against official versions, she observes, with visitors revealed as ‘agents in the roles cultural institutions play in maintaining or challenging the political and social status quo’.

This battle over the future (dis)placement of the Lock Keepers cottage might speak to larger themes of Welsh culture and identity, we can surmise. Architect Owain Williams places the redevelopment plan within the broader context of the Welsh capitol and National self-image forged by way of many iconic buildings in The Bay.

‘The silhouette of the water front in Cardiff has become a progressive symbol of our political and cultural identity’ he asserts, ‘both in its architectural ambition and its relationship to the land.’ He criticised the industrial motif deployed for the roof of the proposed Museum as it will ‘reduce our history to a crude one-liner at the expense of a sensitively observed reflection or buoyant vision of our future’.

Perhaps this sense of being short-changed by the future is reflective of the current uncertain moment, when the devolution settlement itself is being brought into question. The Senedd building with its organic, curvy roof, looms behind these assorted contemporary proposals – carrying with it the original promise (of Tony Blair) to bring power ‘closer to the people’.

“Welsh places past and future, depend on how we are able to better share our feelings and histories about them, through open conflict not hidden deals.”

Meanwhile, The Doctor Who Experience, sited further down the harbour, closed its doors in 2017 only five years after securing a deal with BBC Worldwide (costing Cardiff Council one million pounds in the process). At least this failure to draw sufficient visitors was envisioned on the basis of a genuinely successful world export: TV sci-fi.

One solution, perhaps, might be to include the Harbour Master’s Cottage within the new museum – much as St Francis’ chapel sits within The Papal Basilica around it in the Italian town of Assisi.

This space continues to strike a humble note, quietly commenting on the hubris of investing too much faith in wealthy patronage (Francis gave all his money away to forge his new monastic order, committed to vows of poverty).

Many feelings of attachment and alienation then are afoot in Cardiff Bay, borne on forces that push as well as pull. These are expressed through its collected symbols of power, failed attractions, proposed revivals and hard fought for empty spaces.

It is amongst these contests that public participation needs to find a voice beyond the council chamber, with local residents able to shape their own new order, one that won’t wholly sacrifice in order to achieve an imagined future (whose vision and calculations some dispute).

We need to test these projected stories and their credibility in the face of what has been described by one political economist as a destructive form of ‘capitalist realism’.

Stakeholders need to find ways of their different ‘realities’ to co-exist that don’t cancel out the other, but open up the ground upon which forms of participatory democracy can lock and engage.

Welsh places past and future, depend on how we are able to better share our feelings and histories about them, through open conflict not hidden deals.

Photo by Nick Fewings on Unsplash

Frances Williams is a writer and researcher based at Glyndwr University.