The Independent Commission on the Constitutional Future of Wales must recognise all UK nations’ political and constitutional realities when exploring the future of the Union.

The fact that the four constituent nations of the UK took different tacks in their responses to the Covid-19 challenges in recent years has reaffirmed the national borders extant within these isles.

Further, the trend for significant divergence in policy stances across the various parliaments has compounded other clear political disagreements centred on constitutional change, with different parties holding power in each institution for over ten years. The customary argument that absolute parliamentary sovereignty should rest continually and solely with Westminster now stands challenged.

To protect the UK’s unity post-Brexit, the Welsh Government has suggested federalism as a possible way forward, mirroring unionist views in Scotland. However, federalism, whilst admittedly delivering more powers to Wales, offers restricted opportunities for expanding Scottish autonomy beyond the present status quo and does little to tackle the UK’s future relationship with the European Union (EU) in a way that is satisfactory to the Scottish Government. Federalism would likely deliver reform of the Barnett formula, as desired by the Welsh Government, but would impact negatively on the Scottish block grant, strengthening the attraction of a second independence referendum.

Some politicians may even consider it intolerable to restructure the UK along federal principles, seeking instead to expand Westminster’s reach through Brexit. This would cast an ever longer shadow over the devolution settlements as the UK economy adapts to functioning separately from the EU. Repatriation to Westminster of EU competences in fields otherwise devolved could also hasten calls for Scottish secession. However, the Scottish National Party’s (SNP’s) present platform of pursuing an independent Scotland within the EU is problematic in today’s circumstances. By definition, it necessarily confines and restricts the nation’s ability to facilitate a single market with its largest trading partner, England.

A federal solution likely acts only to entrench many of the structural difficulties extant in the present devolution arrangements, which largely mirror a federal order but without the formal sharing of sovereignty across national parliaments. As the traditional understanding of UK state sovereignty adjusts to the practicalities of an interconnected world, made more apparent since 31 January 2020, there is an opportunity for those advocating greater autonomy for Wales, Scotland and Northern Ireland to progressively present a more sophisticated platform of debate for self-government, or even ‘modern independence’, which wholeheartedly subscribes to outward facing international structures.

Interestingly, Westminster’s tacit acceptance of Scottish, and by some implication Welsh, independence as a legitimate option, further to the 2014 referendum in Scotland, suggests that sovereignty is ultimately determined by the populations of the nations separately and not by the people of the UK collectively. To argue that it is the British people who are first amongst equals is wilfully to ignore the long established, respected status of the home nations in European history.

The challenge to both Conservative and Labour parties is to become more formally representative of the nations within their organisational structures. The make-up of the Liberal Democrats is already federalised, and the strength of the nationalist movements in Wales, Scotland and Northern Ireland is at a level uncommonly seen in other multinational states globally. Accepting that the federal horse has already bolted (particularly before the relentless wave of SNP electoral successes in recent times), might not the more collaborative elements of the political spectrum from unionism to nationalism find some common ground, if not a strategic compromise, in a new partnership for the future?

After all, Britishness as a concept is much older than the UK and it is unrealistic to argue that the Welsh or Scottish people, in notional independent territories, would start considering the English as fellow Europeans instead of fellow British.

If we were offered a hypothetical opportunity to constitute Britain from ‘scratch’ once more today, would we not straightforwardly recognise the sovereignty of the different nations and peoples in these isles and seek to work within a robust social, economic and security partnership directed by a limited, but mature, political legislature?

We must draw on shared experiences, both past and present, in forming an underlying bedrock of effective collaboration for the century ahead.

Such a model is explored in my booklet A League or Union of the Isles.

Devolution involves a sovereign Westminster, in effect, delegating a measure of sovereign authority to the devolved institutions. A League-Union of the Isles turns this constitutional approach on its head, advocating four sovereign nations of radically different population sizes delegating some sovereign authority to central bodies in agreed areas of common interest such as internal trade, currency, large-scale economic considerations, defence and foreign policy, with the British monarch continuing in role.

Today, we are confronted by unprecedented constitutional challenges and tests which require exploration of fresh solutions and governance models for the future, and this I aim to present in this new work. 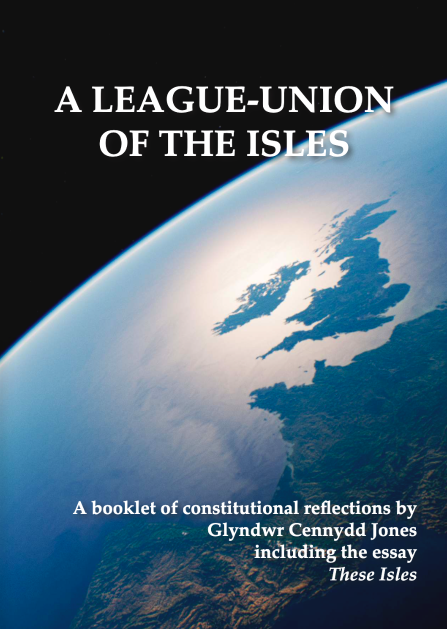 We must draw on shared experiences, both past and present, in forming an underlying bedrock of effective collaboration for the century ahead. If we do not, there is danger that our island relationships will fracture. Conceivably, Wales might even find itself in a UK of two nations only, where Scotland has moved to independence and Northern Ireland has unified with the Republic of Ireland.  The Independent Commission on the Constitutional Future of Wales must consider the political and constitutional realities across all four nations when exploring the nature of the Union going forward.

As the world now knows to its cost, climate change, pandemics, conflict, and economic repercussions respect no national boundaries. We should therefore approach our constitutional deliberations in the spirit of consensus-building and cooperation, and with a firm eye on the needs and aspirations of those future generations who will call these isles their home…

A League-Union of the Isles is available here as an e-book and here as an easily printable PDF.