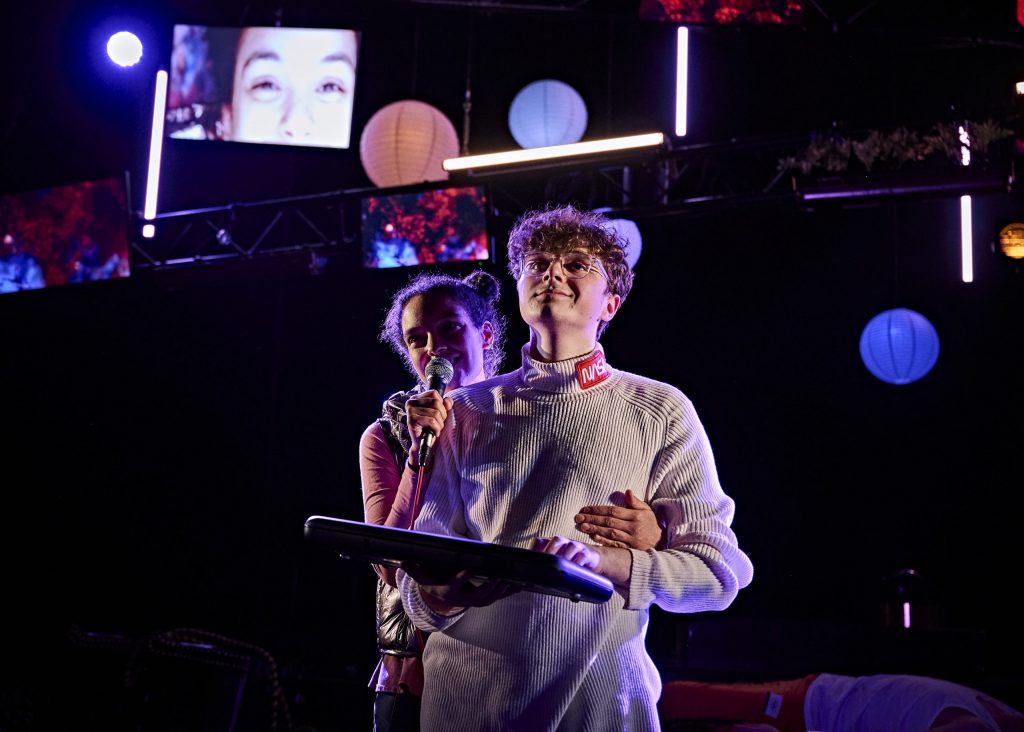 Young Pwdin Evans is suffering from a bad case of teenage angst. He is constantly worried about his weight and his French homework, his parents have separated and remarried to dysfunctional partners, and his beloved cousin Petula has mysteriously disappeared after she stopped eating. While the adults around him have apparently stopped searching for her, Pwdin thinks she may simply have gone on a ‘human strike’. After a particularly disastrous family dinner, he decides to go out into space looking for Petula, physically propelled into the ether by his father-in-law in a fit of superhuman strength. This is the plot of Petula, a new adaptation of a play by French playwright Fabrice Melquiot, born of a collaboration between National Theatre Wales, Theatr Genedlaethol Cymru and August012, and directed by Mathilde Lopez. Daf James’s script is a dizzying mix of English, Welsh and French, which the cast negotiates with endless grace to great comical effect.

Pwdin (Dewi Wykes) grapples with emotions too large for him and apparently opaque to the adults around him, all too absorbed in vain pursuits. His mother-in-law, Amethyst Crappp (energetically portrayed by Rachel Summers), barely represses her vampiric urges; his mother (Clêr Stephens) has become obsessed with fitness; and his father (Sion Pritchard) struggles to be the steadfast figure Pwdin badly needs.

The protagonists’ intergalactic quest follows in the footsteps of Antoine de Saint-Exupéry’s The Little Prince. The play captures the fable’s longing for childhood’s uncompromising wisdom beautifully, updating it with contemporary pop cultural references, from Gillian Anderson to Beyoncé. Pwdin’s scepticism underpins the script’s knowing, but sympathetic satire of the oddness of adult relationships and preoccupations, and their inability to understand their children’s existential feelings.

The performance offers moments of irresistible laughter, and the cast manages to establish a genuine sense of closeness with the audience.

In this respect, one of the play’s main achievements is its opening scene, a magnificently absurdist feast in which the protagonists revel in a raw duck à l’orange. The scene is truly a delight to watch, although vegetarians may find it an ordeal. The production is chockfull of visual finds and Jean Chan’s set design subtly alludes to the transformation of childhood’s playthings into adulthood’s hurdles. As they attempt to reach each other, the cast bounce and slide on the stage, which has been turned into an all-black ball pit for the occasion. Screens display half organic, half futuristic psychedelic landscapes to accompany Pwdin’s quest for his beloved, while on earth his family try and fail to unite forces to look for him, all to the sound of synthetic beats. The performance offers moments of irresistible laughter, and the cast manages to establish a genuine sense of closeness with the audience.

The production also achieves quietly meditative moments, such as a brief journey into the world of the dead. Throughout the play, we are given numerous hints that things in Pwdin’s world may not quite be as they should. Characters turn to the audience not simply to speak, but to ‘process’ their emotions in a mic, as if reeling from an unspoken pain. Often, though, this gets a little lost in background noise, and there is a sense that the production glosses over some of the bigger questions it tantalisingly offers up for our consideration.

Petula’s ethereal voice, her reassuring, elusive femininity is certainly a far cry from Amethyst’s excessive carnal appetites and Mami’s sudden obsession with self-actualising and performance, leaving behind her ex-husband and apron for her new husband, Joe Potatoslouch (Tom Mumford). A soothing dream come true, Petula adds to the chorus of voices that come to reassure Pwdin that he is not fat, that he is, in fact, very desirable. When all is said and done, the play leaves much to wonder, and never quite answers some of its own pressing questions about girls that disappear from not eating, boys worried about their body, sexuality, and whether fantasy and love can cohabit indefinitely – all ends left loose by the rose-tinted ending of Pwdin’s journey.

At the Sherman Theatre, Cardiff, until 19 March, and touring until 8 April.