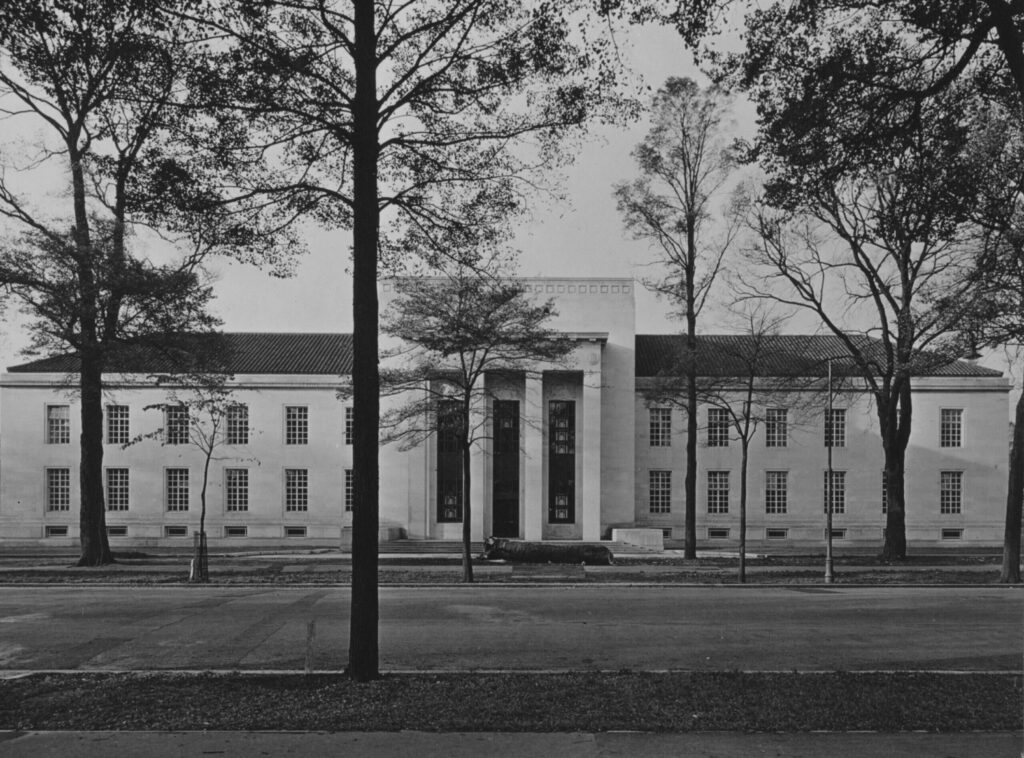 Dr Emma West delves into the history of the Temple of Peace, its legacy, and what it can mean to contemporary visitors.

It’s sometimes described as Cardiff’s best kept secret. You might have walked past it; you might recognise it from Doctor Who or His Dark Materials on the BBC. You might even have visited it to sit an exam or as part of this summer’s Dream Machine exhibition. But what few people know is the history behind the Welsh National Temple of Peace and Health in Cathays Park. It’s a story of how grief and loss can be transformed into a force for good, a tale of optimism and idealism in the face of crisis.

The Temple’s story starts in France, in the trenches during the First World War. The building was the brainchild of the politician and philanthropist Lord David Davies of Llandinam. Horrified by what he’d seen in the conflict, Lord Davies dedicated his life to combating the dual evils of disease and war: the Welsh National Temple of Peace and Health was his lasting gift to the Welsh people.

Designed by the Welsh architect Percy Thomas, the building was conceived as a national memorial to those who lost their lives during WWI. Its purpose-built crypt would house the Welsh National Book of Remembrance, which contains over 35,000 names of those who lost their lives during WWI. When the Temple opened, a page of the book would be turned every day at 11’o clock and the names of those listed would be printed in the local press.

The building was designed as ‘A New Mecca’: a place of pilgrimage to which people from across Wales could march and pledge themselves to peace

Yet Lord Davies didn’t want the building to be a ‘mausoleum’: he wanted it to actively further the causes of peace, justice and health. This, for me, is what makes the Temple so unique. Unlike some more traditional war memorials, the building was designed to look both backwards and forwards; to remember history, but also to inspire change in the present. In a speech at the Temple’s opening ceremony in November 1938, the politician and campaigner Lord Henry Snell described the building as ‘a great moral witness of our desire for peace… It is at once a witness and a call to duty. It is an inspiration and it is a commandment.’

For Lord Davies, international co-operation was the only way to avert conflict. These internationalist principles were baked into the very fabric of the building: materials were carefully selected to represent nations from around the world. In the crypt, the Book of Remembrance was placed in a French bronze case on a pedestal of Belgian marble. Elsewhere, visitors to the Council Chamber were surrounded by Australian walnut cabinets, Canadian maple doors and Swedish spruce window frames. Every inch was full of symbolism.

In more practical terms, the building would be home to two organisations Lord Davies had helped found: in the health wing, the King Edward VII Welsh National Memorial Association, an organisation founded in 1912 with the aim of eliminating tuberculosis in Wales; in the peace wing, the Welsh League of Nations Union (WLNU), a voluntary organisation which supported the League’s work to preserve peace worldwide. The Welsh Centre for International Affairs (WCIA), a successor of the WLNU, still resides in the Temple’s peace wing today.

More than that, though, the building was designed as ‘A New Mecca’: a place of pilgrimage to which people from across Wales could march and pledge themselves to peace. In his speech at the opening ceremony, Lord Davies laid out his ‘dream’ for the Temple. ‘Is it too much to hope,’ he asked, ‘that every man, woman and child, from one end of our beloved country to the other, shall participate in this act of self-dedication of the people, by the people, for the people, by making a pilgrimage to this shrine?’

This call to the people of Wales was significant. In the two decades following the end of the First World War the Welsh people had been tireless campaigners in support of peace. In 1923, 390,296 women signed the Welsh Women’s Peace Petition, calling for America to join the new League of Nations; in 1926, 2,000 women marched from Penygroes, Caernarfonshire, in support of peace. Throughout the 1920s and ‘30s, communities across Wales held ‘Daffodil Days’ in aid of the Welsh League of Nations Union, fundraising £12,000 towards the cost of the Temple itself. In the words of the Welsh MP Sir William Jenkins, ‘The People of Wales are for peace, they have fought for peace.’

The sacrifices made by the Welsh people were reflected in the Temple’s opening ceremony. The building was opened by Mrs Minnie James from Dowlais, Merthyr, who lost 3 sons during the First World War. Dubbed in the press ‘Wales’s Most Tragic Mother’, newsreel footage still survives of Minnie’s speech of dedication, in which she opens the building ‘in the name of the women of Wales’. ‘I pray,’ she says, that the Temple ‘may come to be regarded by the people of my country, both of our generation and of those that are to follow, as a constant reminder of the debt we owe to the millions who sacrificed their all in a great cause and as a symbol of our determination for justice and peace.’

In many ways, the Temple’s story is a sad one: built to memorialise the Great War, and to actively campaign for peace, the building was opened just months before the outbreak of another global conflict. In my research, I’ve uncovered letters which show that Lord Davies was campaigning for peace temples to be built across the world in Australia, the United States and South Africa. With the outbreak of war, this dream was never realised.

Yet the Temple has remained a source of inspiration: visitor books tell us that thousands of people visited the Temple throughout the Second World War and beyond. In 1988, the United Nations Association founded the National Garden of Peace at the Temple, which now contains over 50 peace memorials. In recent years, stories of Welsh campaigns for peace have been inspiring a new generation of peacemakers, following their unearthing by the Heritage Lottery-funded Wales for Peace project.

In today’s troubled world, the Temple’s message of peace, justice and health seem more vital than ever. As an interwar historian, I can’t fail to be struck by the parallels between the 1930s and today: political turmoil, war in Europe, financial insecurity and the rise of the far right once again loom large. But the Temple’s commitment to internationalism in a time of crisis acts as a beacon of hope.

As Lord Davies put it in November 1938, just ‘because at the moment dark clouds overshadow Europe and the world, that is no reason why we should put up the shutters and draw the blinds. On the contrary, in a world of madmen let us display constancy and courage. Let us as individuals and as a nation, humbly dedicate ourselves anew to the great task still remaining before us.’

The WCIA is launching a new Friends of the Temple of Peace group this Autumn. To find out more, or to get involved, visit the WCIA website.

Dr Emma West is a British Academy Postdoctoral Fellow at the University of Birmingham and a trustee of the Welsh Centre for International Affairs with a focus on heritage. She lives in Cardiff.