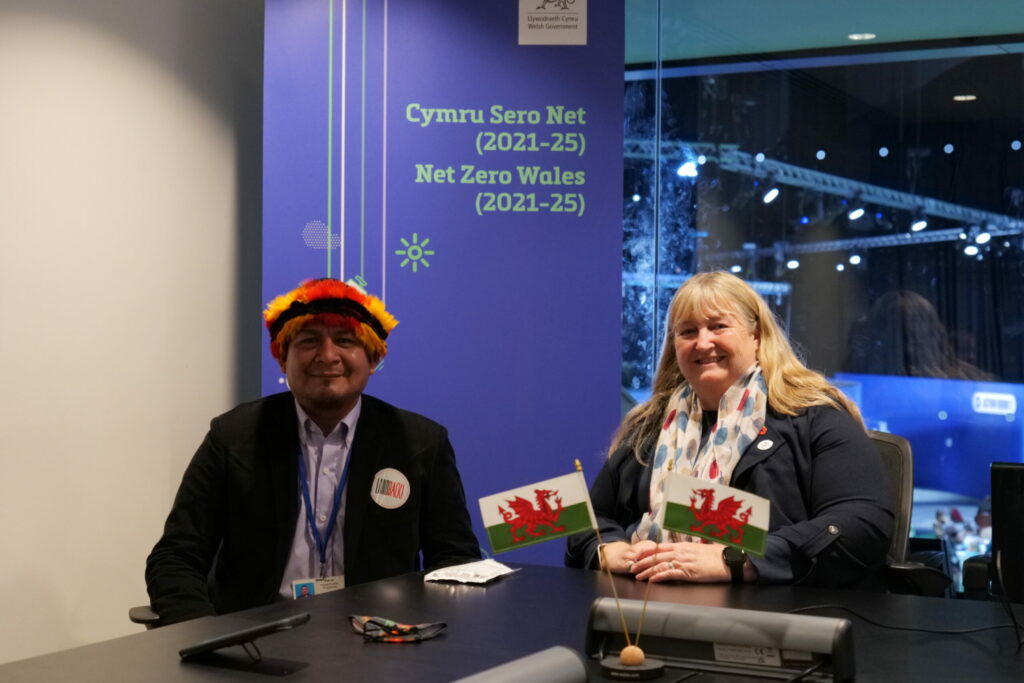 Wales made ambitious commitments at COP26, but action is needed on our deforestation footprint to become a globally responsible nation.

One year ago, I attended the COP26 global climate summit in Glasgow as an official UN observer. This gave me and my organisation access to the decision makers tasked with reviewing the progress made since the 2015 Paris Climate Agreement which committed to keeping global temperature rises below 1.5 °C.

We went there with two key aims. Firstly, we wanted to encourage urgent action to protect tropical forests and see Wales commit to becoming the first ever Deforestation Free Nation in the world. With the Intergovernmental Panel on Climate Change (IPPC) declaring a “code red for humanity” ahead of the summit, ambitious commitments were essential. We also wanted Indigenous Peoples’ voices to be heard at the climate discussions.

During COP26, Size of Wales, WWF Cymru and RSPB Cymru launched the Wales and Global Responsibility Report. The report was the first of its kind and analysed Wales’ contribution to the global deforestation crisis (read analysis on the IWA website here). It revealed how a significant amount of commodities imported into Wales, such as cocoa, palm, beef, soy, and timber, derive from areas with a significant risk of deforestation and human rights abuses. The emissions associated with these imports are equivalent to nearly a quarter of our annual domestic transport emissions.

Rivelino Verá Gabriel, Chief of the Mbya Guarani Indigenous Peoples in the Atlantic Forest powerfully highlighted the link between consumption in Wales and overseas deforestation. He explained how the widespread prevalence of soy farming on his territory is causing high levels of deforestation and putting the lives of the Guarani at risk. Every year, Wales imports around 190,000 tonnes of soy, mainly in the form of animal feed. Almost half is consumed by the Welsh poultry sector, followed by dairy and sheep.

Without quick and decisive action to stop it, there is no credible route to reaching net zero.

‘We were both struck by the challenges [The Guarani and Wampís] face as their homes and cultures are threatened by farmers and loggers, in direct response to consumer demand from our countries and others. And the message from COP is that we need to change.’

So, given the Welsh Government’s strong words and commitments at COP26, what progress has been made a year on?

It is highly encouraging that Wales continues to support community tree growing in countries that have experienced high levels of deforestation. As part of the Mbale Trees Programme in Uganda, one tree is planted for every child born in Wales. Since 2010, nearly 20 million trees have been planted, benefitting the local and global climate whilst providing livelihood opportunities for people in Mbale. A brilliant example includes Jenipher’s Coffi, a Fairtrade coffee grown under the shade of the trees planted by the programme.

Conversely, more action is needed to protect existing tropical forests and change what we import into Wales. Tropical forests are vital to maintaining a healthy global climate, but 11 million hectares are destroyed annually — an area six times the size of Wales. Tropical deforestation now accounts for around 20% of all global carbon emissions. Without quick and decisive action to stop it, there is no credible route to reaching net zero.

In one of the central pledges of COP26, over 140 countries pledged to halt and reverse deforestation by 2030, including Wales. Climate Minister Julie James committed to action, saying: ‘I am absolutely determined that Wales is going to be a nation that does not deforest the planet. I’m going to change what I do and we’re going to change what Wales does’. However, action to date has had mixed results.

On the one hand, there has been a commitment to helping Welsh farmers with greater support to move away from soy and palm animal feeds that might drive deforestation. This measure will help ensure that meat produced in Wales is more sustainable as part of the draft Sustainable Farming Scheme. This needs to be built on with an integrated food policy that results in more ethical and sustainable food and promotes sustainable farming practices.

The Welsh Government spends £6 billion on procurement each year, meaning a commitment to stop purchasing products and commodities that drive deforestation could have a considerable impact.

Recognising that Indigenous Peoples have a crucial role in preserving tropical forests, the Welsh Government has provided a grant to the Wampís Nation. This funding will help build a solar-powered boat and better monitor the territory from illegal logging. It will also support a youth exchange between people in our nations to strengthen our cultural ties and raise awareness of deforestation.

However, there is more to do regarding the impact of Welsh public spending. The Welsh Government spends £6 billion on procurement each year, meaning a commitment to stop purchasing products and commodities that drive deforestation could have a considerable impact. The draft Social Partnership and Public Procurement bill, currently making its way through the Senedd, provides a golden opportunity to take action. It can show how Wales can be a globally responsible nation, yet it contains no mention of deforestation.

Looking at how we invest our money is also crucial. Research has shown that £2 in every £10 of an average pension is linked to the destruction of forest areas across the globe. Welsh public sector pension funds urgently need to break these ties to help tackle the climate crisis, rather than fuel the fire.

The recent election victory of Lula da Silva in Brazil is good news in the fight against deforestation in the Amazon, the world’s largest tropical forest. However, world leaders still have an essential role in removing the deforestation economy from their domestic supply chains to meet the 2030 target.

Wales has much to be proud of since COP26, where it laid a strong foundation in this pivotal decade for our planet’s future. However, there is much more to do, now with the added challenges of a gloomy economic outlook. The Social Partnership and Procurement bill and the Sustainable Farming Scheme provide a historic opportunity to eliminate the Welsh Government’s deforestation footprint. Wales could set an example for the rest of the world to follow while taking decisive steps to tackle the climate crisis. Let’s not miss this chance!

Barbara Davies-Quy is Deputy Director of the climate charity Size of Wales.