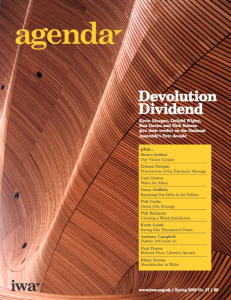 Simon Jenkins argues that we should show more confidence in the custodianship of our architectural inheritance.

Key figures in the 1997 referendum campaign give their verdict on ten years of the National Assembly.

Page 19 Frustrations of the European Message

Eluned Morgan reflects on 15 years in the European Parliament.

Simon Mundy says the June European elections will mark a coming of age.

Derek Jones on the lessons we should learn from the travails of a Welsh county council.

Page 28 Repaying an Outstanding Debt in the Valleys

Gwyn Griffiths describes the extent of the Welsh land reclamation task still to be finished.

Marie Navarro and David Lambert find that new powers are being handed to Wales without scrutiny or debate.

John Williams makes the case for an independent Law Commission for Wales.

Elfyn Llwyd argues that bilingual juries should be appointed where defendants request it.

David Symes and Jeremy Phillipson describe how the Assembly Government is centralising control over our inshore waters.

Sally Holland finds reasons to be cheerful in a new IWA report on how we are bringing up our children.

Nigel Thomas reports on an evaluation of the Children’s Commissioner for Wales.

Simon Roberts is worried that an amalgamation of Trinity Mirror’s operation will further isolate north Wales.

Andrew Green charts a course through an ocean of digital knowledge.

Anthony Campbell explains that Darwin’s ideas are as relevant today as when they were published a century and a half ago.

John H Davies describes how Welsh thinkers were at the centre of the 18th Century’s cauldron of revolutionary thought.

Paul Frame looks back at the life of Richard Price, a largely forgotten son of Wales.

The Last Word by Peter Stead.