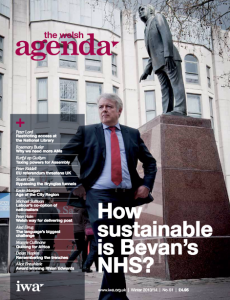 How sustainable is Bevan’s NHS?

News from the IWA

OUTLOOK: Dreaming fiction in the Valleys

Sustaining spending on the NHS will hit rest of the budget

The dilemmas of Welsh health decision-makers

Tax powers would enhance the Assembly’s engagement with the electorate

Instability beckons beyond the Scottish vote

James Mitchell asks how the Scottish referendum will affect Wales

Age of the City Region

How housing can boost rural economy

‘This article is a condensation of a much longer conference paper which acknowledges and quotes extensively from an article by David S. Moon: ‘Welsh Labour in power: ‘One Wales’ vs. ‘One Nation”, in the journal Renewal No 27: pages 77-86.’

Welsh Water can provide a model for Royal Mail

Why Labour could lose half its income

Wales hit by quotas extended to under ten metre fleet

Small-scale beekeeping in the developing world

Ghostly imprints of an epicentre of the maritime age

How a corkscrew and honey saved a royal line

An oblique glance at a cloud of artists

Portrait of an elusive bohemian

Wells we should know

Random supernumeraries in a Commons of lost souls