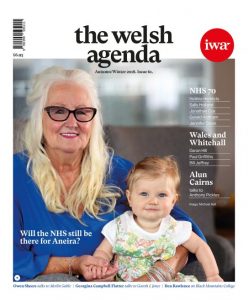 The summer of coups: Daran Hill assesses the lie of the leadership land

Will the NHS still be there for Aneira?: Sally Holland and Heléna Herklots consider the future

The Territorial Secretaries of State: Bill Jeffrey on Wales, Scotland and NI in Whitehall

What do we expect from a First Minister? Paul Griffiths on the challenges facing whoever’s next

Parting of the clear red water: Huw Lloyd Williams on the axes of division within Welsh Labour

A silver bullet for social care: Gerald Holtham on the case for a levy

A ‘Modern Mecca for the world: Jonathan Cox on Nye Bevan’s legacy

Storming the Citadel: Colin Thomas on A.J. Cronin’s fictional forerunner to the NHS

A revolution from within: Jennifer Dixon gives an update on health and social care reform

Who will care for Granny? Charlotte Whitney on solutions to the care crisis

A college for the future: Ben Rawlence on plans for innovative HE provision in the Black Mountains

Generation Z: Phil Swan on how networking has changed

How good are Welsh universities? Malcolm Prowle and Caitlin Prowle assess the facts and figures

Q & A: Rhian Elizabeth talks to clare e. potter about her poetry in ‘The Last Polar Bear on Earth’