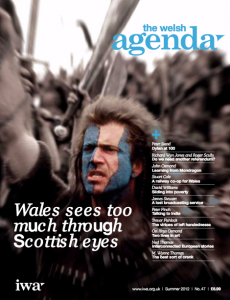 He was happy all the time

Following Scotland has run its course

Will Britain turn into England?

How to damage public confidence in devolution

Valleys can cut it in engineering

Rhys David reports on the GE aircraft maintenance plant at Nantgarw, one of Wales’ most successful enterprises

Could a co-op run our trains

Wales is sitting on a bilingual gold mine

Why we need a strategy for young carers

Vanessa Webb examines the problems of more than 11,000 welsh children who look after family members

Colin Thomas describes the production he has in hand for our first ebook, a combination of text and video, on Wales and America

Farming and food in Abergavenny

The virtues of left-handedness

Trevor Fishlock muses on the sinister meanings of small things

We have a real country now

A warning against dominant narratives in recent Welsh history

‘The best sort of crank’

Wide-eyed love of a Welsh pilgrim for Armenia

Wandering around a national conversation