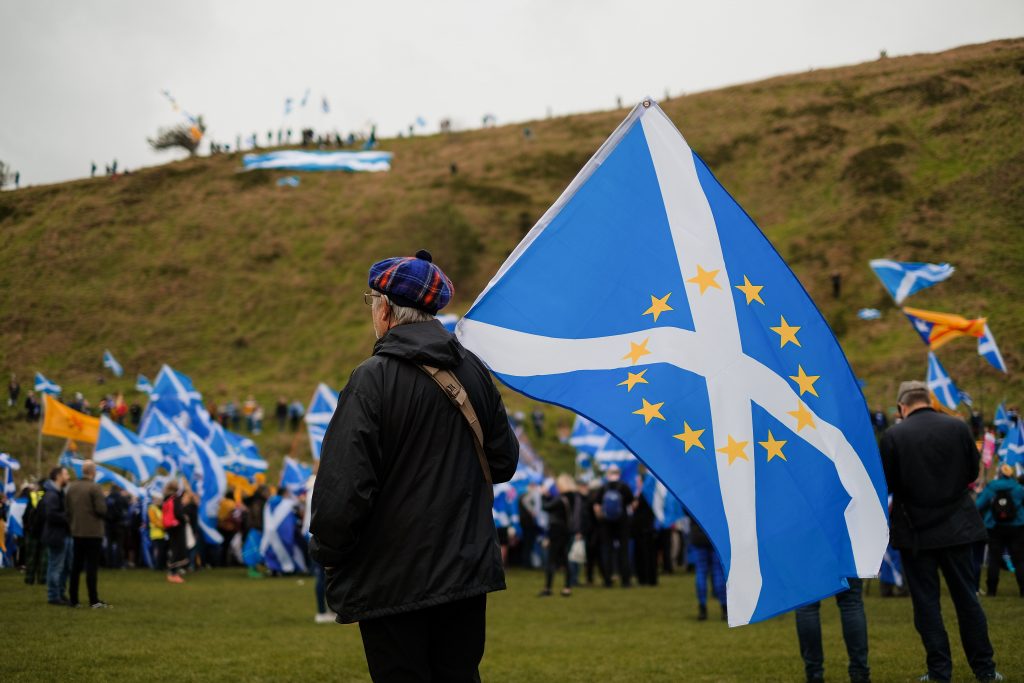 Leaving, remaining and Scottish independence are all on the table for next year regardless of what happens in the upcoming election, writes Dr Kirsty Hughes

Will Brexit finally happen, when and how damaging? All the crucial questions hang in the air but so far the election has taken off with more of a whimper than a bang.

It is, in many ways, a Brexit election. But it’s already clear it will have other key themes too. The Tories need it to be a Brexit election – to garner up the votes of the Brexit faithful and see off the tricks of Farage’s Brexit party. Labour’s Corbyn, still clings to his essentially pro-Brexit fudge (which the Keir Starmers of the party hope will eventually deliver remain). But Corbyn most of all wants to talk about poverty, inequality, public services. Brexit bores him.

Nicola Sturgeon has launched the SNP’s election with a core emphasis on independence. Yes, the line goes, Brexit is undesirable and damaging but the best route now is independence – with stopping Brexit altogether sounding rather secondary, perhaps suggesting a lack of confidence that it’s even possible.

Meanwhile, the LibDems are hanging their colours on revoking Brexit, whether by a parliamentary or people’s vote – and a back up message of how bad either Johnson or Corbyn would be as Prime Minister. In Northern Ireland, Sinn Fein has stood down in 3 constituencies to give remain candidates a chance, so Brexit will play as a key issue there too – with the frontstop/Irish Sea border inherent in Johnson’s Brexit deal a source of debate too.

Yet despite the debate, confusion, sound and fury still to come in the election campaign, in the end, there is likely to either be a Tory majority (smaller or larger) or a hung parliament. The former would mean Johnson’s deal would be expected to pass at Westminster – and then at the European Parliament (this requirement making a pre-Xmas Brexit highly unlikely). The latter, a hung parliament, would open up a chance of a minority Labour government and the prospect of a second EU referendum – if the LibDems and the SNP give support to a people’s vote.

So it’s a Leave/Remain election in outcome whatever the vagaries of the debate in the coming weeks. Johnson’s purge of Tory moderates means the Tories will be less divided than in the outgoing parliament. And it can’t be ruled out that he would try to form a government if the Tories were the largest party but he would surely struggle to find reliable partners.

Johnson desperately wants to focus his campaign on his simplistic Brexit slogan of ‘get Brexit done’. His forays into the NHS so far have served to highlight the anger within the health service at Tory policies. Usually safer Tory areas such as the police may not fare much better. And in a contest on who will protect people on benefits more, the Tories are unlikely to come first.

Michael Gove has been pushing another Tory Brexit theme – that there will be no extension of the transition period (assuming Brexit happens) beyond December 2020. The possibility to agree a one or two year extension with Brussels by mid-2020 will be ignored he says. But this is already starting to get the Tories into the weeds.

Johnson negotiated a revised version of May’s Brexit deal to put a customs border down the Irish Sea – so giving the Tory Brexiters of the European Research Group their goal of brilliantly negotiating trade deals around the globe, outside of Brussels’ control. But Nigel Farage says this isn’t Brexit – a bit like the DUP, he wants Brexit but none of the ones on offer.

But Johnson’s efforts to suggest urgency, that only the Tories can see Brexit done is getting ever muddier. The withdrawal agreement bill passed at second reading. But instead of agreeing a longer, serious timetable to scrutinise the bill – which could have been done in less time than the election – Johnson went for his main aim, staying in power through an election. Brexit has always been secondary to this for him.

So Gove sounding tough on ending transition by end 2020 adds to this muddled pitch. Brexit wasn’t 31st October. It won’t be pre-Xmas. It might be 31st January but the UK would then be thrown into an indeterminate transition and an unknown future trade and security relationship.

Gove gave the game away – at least to Brexit voters who might listen to him and not to Labour or the LibDems. Leaving the EU is just the beginning of more Brexit debate and negotiations with Brexit. It means continuation of uncertainty; of parliamentary, political and public debates. It is close to never-ending – definitely December 2020, really?

Jeremy Corbyn may prove a slippery opponent from the Tories’ point of view. He’s not an ardent remainer like Jo Swinson – more bored eurosceptic leaver. He will repeat his line on a Brexit deal and then another vote with no position on remain and leave until after his new deal. It’s a weak, damaging fudge and unlikely to play well with voters. But it could happen – a ‘softer’ Brexit akin either to May’s deal or to staying in the customs union and single market could be agreed with a long-suffering Brussels in a few months. A referendum could happen after that (perhaps not in as few as 3 months).

Corbyn’s Brexit ennui may, to some extent, let Johnson off the hook somewhat on the damage his hard Brexit deal will do. Corbyn is not at his best tackling damage to UK-EU trade, hard borders, falling investment – but he will give it a go. And both the SNP and LibDems should be stepping more confidently into that territory too (although hard Brexit borders cut both ways for the SNP).

The LibDems are, in fact, best positioned to be a party defending both unions – the UK and the EU. Johnson has destroyed the Tories’ unionism with his customs and regulatory border in the Irish Sea. Corbyn is open, at some point, to a second independence referendum in Scotland. But whether that will garner the LibDems many extra votes in England and Wales is uncertain – and it will have little impact in Scotland, simply because the LibDems are too weak there.

Meanwhile, unlike in 2017, Nicola Sturgeon has put independence at the heart of the SNP’s campaign and said she will request a section 30 order before Xmas (presumably this time with more idea of what to do with a rejection than the Scottish government had in March 2017). The risk here is that, by putting the SNP’s anti-Brexit, pro-people’s vote line second, Scottish remain voters who are anti- or ambivalent on independence will be put off. And if the aim is to gather up the pro-independence vote, will SNP rhetoric tone down a little on Brexit – where 25% of their support are still ‘yes leavers’?

Two things may be underlying this SNP approach. The first, most obvious, that the political dynamics and the polls around independence (polls now at 50:50) suggest now is the time for a strong push, even if a second independence referendum in 2020 is unlikely in most scenarios – and the 2021 Holyrood elections become yet another test of independence support.

But there has also, secondly, been a strong tendency in the last couple of years for the SNP leadership to doubt that Brexit can be stopped. An SNP election strategy where there’s a real chance of a UK remain scenario is likely to be very different from one where the likeliest outcome is seen to be a Tory government and Brexit.

But if there’s a Labour minority government needing support, the SNP calculations change. SNP support for another EU referendum would become conditional on another independence vote. This of course would upset the LibDems, who would be very wary anyway of offering Corbyn support on anything other than a second EU vote. This three-way dance, if it transpires, will be complicated indeed. Would either the SNP or the LibDems really bring down a Labour government over a future independence referendum and miss the chance of stopping Brexit? They might.

And adding to the mix, if Corbyn actually became prime minister, his key advisers will still be pushing for a Labour Brexit to happen. Unite’s Len McCluskey has already been taking lines from the Tory Brexiter playbook – suggesting shadow cabinet members should not argue for remain or this would undermine Corbyn negotiating his new deal in Brussels.

Labour’s best chance may in fact lie with most of its candidates arguing for remain. Labour as the middle ground between leave Tories and remain LibDems, independence SNP, is not a comfortable place. But Johnson’s Tories do not face an easy ride either – a never-ending Brexit and a Brexit party line that “this isn’t Brexit” could both cut through.

The UK’s failing politics are both cause and result of Brexit and will not be solved by one dark December election. But where Brexit goes in its next stage will be.

Photo by Adam Wilson on Unsplash

This article previously appeared in The Scottish Centre on European Relations.

Dr Kirsty Hughes is Director of the Scottish Centre on European Relations. She is a researcher, writer and commentator on European politics and policy, and she previously worked for a number of leading European think tanks.