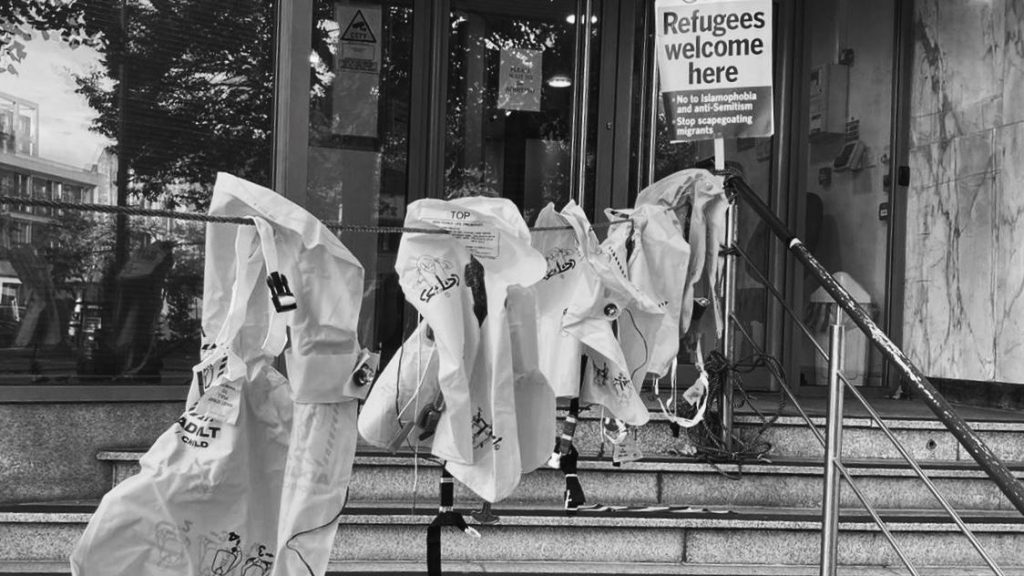 Europe Must Act is a grassroots movement that brings together non-government organisations and volunteers to campaign for a safe, fair and sustainable solution to rehoming refugees in Europe.

The refugee camps of Lesvos, Chios, Samos, Leros, and Kos, are currently Europe’s largest, with 24,652 people living on these Greek islands in accommodation with a capacity of 6,095. These camps fail to offer safe and dignified conditions for the thousands of families currently living there.

Since the start of the so-called refugee crisis in 2015, European leaders have been scrambling to find a way to manage the many refugees fleeing war and persecution in countries like Syria, Iraq, Iran, and Afghanistan. Their solution? The 2016 EU-Turkey Agreement Deal.

This deal externalises the European border with the aim of decreasing the number of refugees arriving in the European Union (EU), for they are kept in Turkish refugee camps—Turkey is home to the largest refugee population in the world, reaching 3.6 million in 2019.

In an attempt to outsource the European refugee “crisis” beyond its borders, the EU promised to fund Turkey’s refugee population as long as Turkey closed the European border routes.

With regulations in place and Turkey reaching its limits, many refugees travel through this gateway country to Europe and those who reach the Aegean islands are then forced to live in the deplorable conditions of its refugee camps for months or even years, as asylum procedures drag on.

On 2nd March 2020, Europe Must Act published an Open Letter to EU leaders demanding the immediate decongestion of the Aegean camps; this letter was met with considerable support, but meaningful action has yet to be taken.

“On Chios there is one toilet for every 192 people.”

Our aim is to realise a fundamental change in European migration policy, ultimately closing the camps, relocating refugees and asylum seekers equitably across Europe, and rethinking the EU-Turkey agreement.

Individuals who have endured the treacherous journey to European soil and end up in the Aegean camps will not be returned to Turkey under the agreements of this current deal, but it is understood that they will be shared between other members of the EU.

A 2016 Guardian article (Refugee crisis: What does the EU’s deal with Turkey mean?) showed concern over EU countries lack of compliance with the deal and suspected another humanitarian crisis on the horizon.

This issue should not exclusively be for the Greek government to deal with, rather it is the responsibility of Europe as a whole.

Europe Must Act are advocates for dignified and legal conditions of reception across Europe. We recognise the non-compliance of the EU-Turkey Agreement Deal and are therefore calling for action from our local and national government bodies to immediately decongest the islands through fair relocation.

This deal must be replaced with a fair and humane EU migration policy, one that recognises the plight of refugees and asylum seekers and provides safe and legal passage, to bring an end to the needless deaths and suffering that our current EU policies provoke.

It is a demand grounded in deep optimism and a profound belief that the right choices can be made if we all work together, as is the grounding ethos of the European Union. Through local action in cities across Europe and joint advocacy efforts of grassroots organisations we are determined to amplify the voices of those seldom heard.

The 2020 Aegean Grassroots Report provides a factual overview of the severity of the living conditions forced upon refugees and asylum seekers.

From the lack of sanitation – on Chios there is one toilet for every 192 people – to the lack of substantial food (including queue times of up to three hours). The conditions in the Aegean camps are abhorrent and truly are a shameful mark on the European project.

In the wake of the recent Moria camp fire on Lesvos which left just under 13,000 refugees and asylum seekers homeless, Cardiff Must Act held a demonstration outside the Cardiff Home Office Visa and Immigration Centre, calling on the UK government to do their part to help relocate the thousands of vulnerable people who lost their homes to the fire.

Germany has pledged to take in 1,500 people displaced by the fire, with other member states following suit, but the reaction from the British government has been to remain silent.

Across Europe and in Cardiff, we see our role as one of education and demonstration; to raise awareness of the suffering experienced on the Aegean islands and to demonstrate in the street to show the government that there is popular support for the welcoming of individuals from the Aegean refugee camps.

“Europe must act” is not a naïve demand. The essence of the European project is to come together for mutual benefit and to prevent atrocities, the likes of which plagued our continent during the twentieth century.

Politicians compromising on their core values, on our core values, to stem the tide of populism; that is true naivety. It hands victory to those who wish to deny the basic human rights of others, all in an attempt to win political points.

This is a crisis of compassion and one for which we are all responsible. It is Europe’s migration policy which is fundamentally flawed and until it is changed for the better, we will continue to stand up for those forcibly forgotten.

There can be no compromise on human rights. Not now, not ever. Europe Must Act and Cardiff Must Act for the good of all people, to show the world that we are welcoming and compassionate, and that the essence of the European project has not been lost.