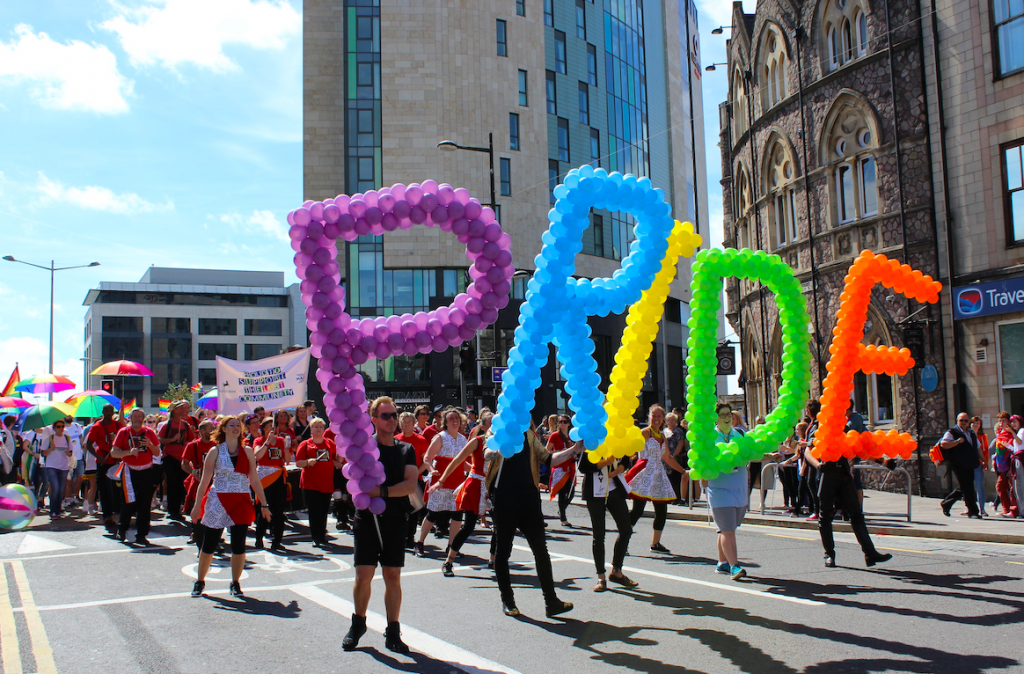 In a recent interview, Hannah Blythyn confirmed the consultation had ended, but was unable to share any further insights as to its outcome, adding: “We have committed that we will report annually back to Welsh Government of the progress made against our objectives, which will allow time for reflection and for objectives to be prioritised moving forward to ensure the report maintains live and serves the needs of our community at that time.”

To serve such a large purpose is no mean feat and, as Blythyn admits, “To be able to do this today, we must reflect on our past, learn from our mistakes, celebrate our successes and move forward together as one.”  Many people will know the story of the Lesbians and Gay Men Support the Miners through the 2014 film Pride, and how as a group they raised money for South Wales miners during the 1984-85 strike, but Wales’ queer history spans much further.

Welsh historian John Davies came out in 1998. As part of his life’s work, Davies researched and promoted LGBT+ history in Wales, which at the time had been rarely spoken of or published. In 2012 Davies delivered his first speech on LGBT+ History at the first LGBT+ exhibition in Wales at the Senedd. In his speech Davies spoke of the ‘mute centuries’ of LGBT+ history. He explained that LGBT+ people in Wales did not develop a ‘subculture until the late 20th century,’ and previously found refuge in London’s gay subculture’. He added there were some exceptions to the rule, such as the Ladies of Llangollen in the eighteenth century, ‘the most famous lesbian couple in Europe’. In the mid-twentieth century, Cardiff’s Ivor Novello  composed ‘Gay’s the Word’ and reputedly popularised ‘gay’ as the synonym for homosexual.

It would appear these ‘mute’ years lasted much longer, as it was only the same year, under a decade ago, that Wales received funding for the first time to explore the history of sexual orientation and gender identity in Wales. Titled Welsh Pride and funded by the Heritage Lottery Fund (Cymru), the project began to chart the history of LGBT+ communities in Wales by exploring the social, political and personal aspects of what life was like for LGBT+ people over the years. The project was vital to collect people’s stories and experiences, to share them for the generations to come.

This has since spurred other projects. Pride Cymru produced a map of lost LGBT+ venues in 2018 and last year’s revised map, produced with support from the Heritage Lottery Fund, includes many of the organisations created by and for the community in the 20th century. As well as pubs and clubs, the map lists spaces such as the long since closed One o Eight community bookshop in Salisbury Road, which in the 1970s, was “one of the few places in Cardiff where you could pick up a copy of Gay News and other works of queer and alternative literature”. The interactive map features a pinpoint on every venue listed which can be clicked on and a brief history pops up with some offering a chance to click and read on for further information.

Historian Dr Daryl Leeworthy, who researched the map as part of a team with others from Pride Cymru, explained that it also featured LGBT+ spaces still in existence, such as Charles Street and Churchill Way, which are still home to gay clubs and have been friendly space since the 1960s and 1970s.

Dr Leeworthy, who in 2019 authored A Little Gay History of Wales, said: “When I started out on the research in the summer of 2014, there was not a single history article nor a single history book about Welsh LGBTQ+ history—and at that point, ever. So, with Pride (the film) just having come out and with the obvious Welsh elements there piquing interest, I asked myself the question ‘okay, what else is there’, started reading Jeffrey Weeks’ Coming Out (which is from the late-1970s) and I proceeded from there”.

It is strange to think that Welsh queer history has only started to be unpicked and studied over the past ten to fifteen years, but as Dr Leeworthy continues, “Some folks will find such a portrait of the past quite unpalatable—they imagine that it was horrible for queer people in the past and that the present is so much better, but that’s not the view taken by professional historians any longer. Most of my historian colleagues now consider, as do I, that society took a very much laxer attitude towards queerness in the first half of the twentieth century, with not entirely dissimilar ways of living to the present—even in Northern Ireland. I hint at this in the book in the Welsh context with the phrase ‘hidden in plain view’”.

Welsh heritage is so often overlooked, hidden under the banner of Britishness, but the Welsh have a unique voice that needs to be known and represented. Historically, as a nation, Wales has been conquered and subjugated by English law and moral persecution, but it has led the way too. As well as the map, there are further efforts to record LGBT+ history. The St Fagans National Museum of History is actively collecting Wales’s LGBT+ history, building up the national collection to be fully representative of the entirety of the LGBT+ community across Wales. They welcome objects, documents, and photographs that represent both LGBT+ history and current LGBT+ lived experiences.

We still have a way to go in uncovering the full diversity of the queer Welsh experiences of the past, but we are getting there, and these past projects and publications supply us with evidence of a fascinating world of stories, people and ideas; a confirmation that we have a past in this land as well as a future.

Despite this, discrimination still exists. Campaigners in Cardiff are calling for the police and other authorities to do more to protect LGBTQ+ people after it emerged the sadistic homophobic murder of a consultant psychiatrist was only one of a spate of hate crimes recorded at the time. A vigil was held near Bute Park in the city on Sunday 6 February after a 17-year-old girl and two men were found guilty of murdering Dr Gary Jenkins, a father of two, by beating him and stamping on his head for 15 minutes in the early hours of a morning in July last year. This was the same month the LGBT+ Action Plan consultation launched.

As Blythyn said, “It is more important than ever to have this ambitious plan. To tackle hate and ensure that every LGBTQ+ person across Wales feels safe to be their authentic selves in a country that wholly supports them.”

According to Home Office figures, hate crimes against people based on sexual orientation have risen every year in England and Wales from 2016/17 to 2020/21. In 2016/17, there were 8,569 of these crimes recorded by police, but last year this figure was 17,135. For hate crimes against transgender people, this figure has risen from 1,195 to 2,630 in the same period.

As transformative change is within our grasp, the community of Wales can begin to live in the country they and their forefathers imagined.

There is no doubt that the rise in figures is reflected in the experiences of people in Wales. Continued support for our trans community is essential as they continue to receive abuse and discrimination through right-wing media — which is, ironically, history repeating itself. The description of our trans community as paedophiles is similar to how gay men were portrayed in the 70s and 80s.

But if history has taught us anything, it is that we stand united in the face of adversity. We stand strong. We may still have a long road ahead of us, but we are formidable in our vision and ambition.

The LGBT+ community will achieve it together, proving once again that when it comes to equality and our rights, we stand taller united. As transformative change is within our grasp, the community of Wales can begin to live in the country they and their forefathers imagined.

And as Davies concluded in his speech, ‘Waldo Williams also wrote the line “Gobaith fo’n meistr: rhoed Amser i ni’n was”. “Hope is our master: time was given to us as a servant.” And I’m sure that through the mute centuries there were those who lived in hope. At last, time has fulfilled some of those hopes but, as everybody’s stressed, much more needs to be done…there is only one community and we are all members of it, but within that one community there should be a myriad of multiple identities: that is the way ahead’.

Damian Kerlin is a Cardiff based writer and journalist. As well as managing his own blog, www.damiankerlin.com, he has written for The Belfast Telegraph, Daddi Life, Gay BoyBible, Every Day Magazine, Gay Community News, Left Foot Forward and Adoption UK (to highlight only a few...). He was listed as a Rising Star as part of Wales Online Pinc List for his journalism and blogging.