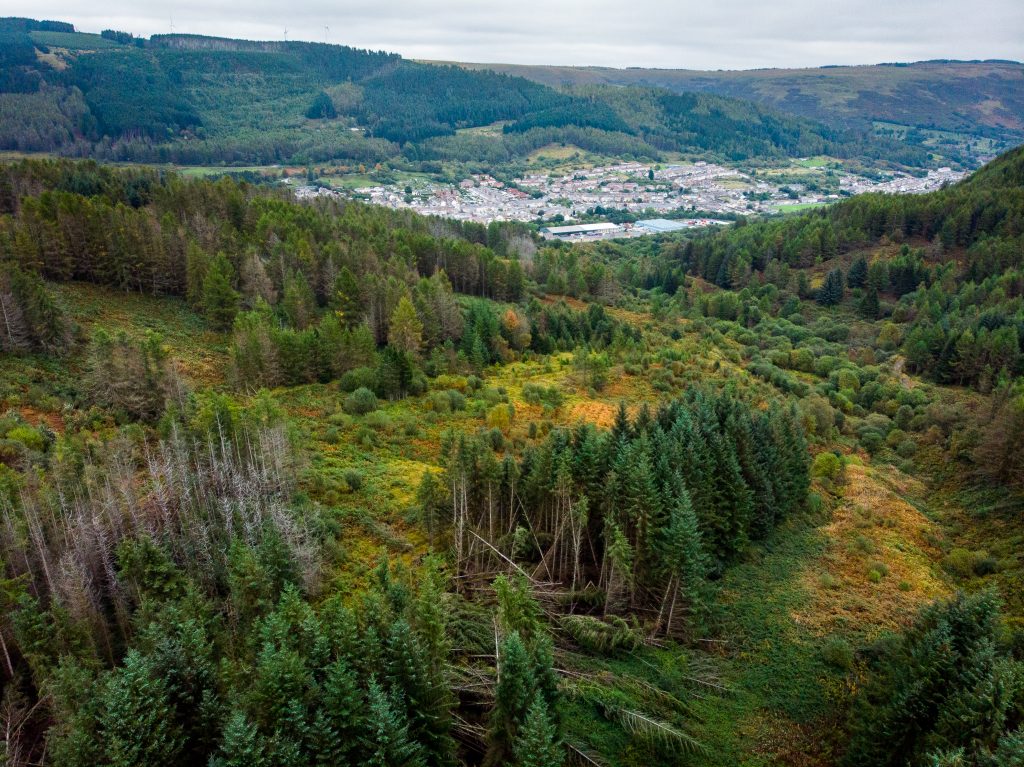 Talking to residents from the Upper Rhondda Fawr, Cam Elizabeth explores their changing relationships to an ever-evolving landscape.

Many in the Upper Rhondda Fawr have spent their lives deeply rooted in the landscape surrounding their towns and villages. Treherbert-based organisation, Welcome To Our Woods, in partnership with The Green Valleys CIC, is finding ways to acknowledge these long-established connections by translating community values into public sector land management strategies with project Skyline. My colleague, Chris Blake, recently set out a strong case for why we need to ensure that community values are expressed in the way land is managed. Storytelling is crucial to this work. Indeed, we also need to hear the stories of those communities in policy contexts in order to fully realise how essential their connection to land is.

As a member of the Rhondda Skyline team, I have been gathering the histories and perspectives of the local people giving their time to this project.

While the nature of the connection that these local people have with the land is ever changing, its significance to their everyday realities never diminishes

It is sixty years since the Forestry Commission first started reclaiming derelict mining land in the area with forestry planting and over 30 years since the closing of the last coal mining pit in the Rhondda. Past and present generations have shared a history with the landscape that has affected their lives in all kinds of ways, some positive, some negative, and often through decisions they have had little control over. Yet while the nature of the connection that these local people have with the land is ever changing, its significance to their everyday realities never diminishes.

As their testimonies reveal, those growing up in the 1960s, 70s and 80s, are well acquainted with the feel of the exposed earth from the black coal tips of the Fernhill, Bute and Ynysyfio collieries. These areas are remembered by residents as sites of freedom and learning. Those heaps were not merely industrial backdrops. They were great hilltops from which children would slide down on cardboard sheets. The flatter parts of the piles worked as pitches for games of football and cricket. Beyond the tips, the opportunities for adventure continued into the vast expanses of ground left behind by the closing collieries, filled with abandoned tools, buildings, trams, and openings in the ground. Children would come home with coal dust in their hair and under their nails, receive warnings from their parents, and understand something about themselves and the landscape.

Beyond the attractions of the collieries were other spots; the “danger pond” on Penyrenglyn, which later became an area of ecological interest; “the battlefields” where the tall grass still sways in the wind; and “the Nant” stream where families would meet and children would build competing dams. Pen Pych mountain, just above the town of Treherbert,  or “the Rhigos” (Craig y Llyn), further up the valley, offered up significant rites of passage in young people’s lives, as one local shares: “The first time my brother took me to the top of the mountain I remember being absolutely awe-struck. Being in the valley you’re a bit enclosed and when I got to the top of the mountain I could see other valleys and other mountains and to me that was massive. It was my first glance of something else out there.” The movements of the surrounding countryside also encroached on town life. Some remember the sheep that used to come down from the valleys on bin days to rustle through rubbish on the streets of the town.

Those working the land in the collieries reminisce about the comradery rather than the mining work. Their living memories are of the appeal of brotherhood, of moments spent drinking together from a young age, and losing friends to mining accidents. A resident recalls asking his father about the potholes that were visible from the Rhigos Road. These were created during the 1926 miners’ strike by individuals unlawfully digging for coal to keep struggling families in their communities warm. It is no coincidence that the great movements of land at that time were reflected in the movements of the people; their coming together and shifting apart through physical and economic struggle, and death.

Evidence of these memories today is largely hidden by the coniferous trees that now dominate the landscape. In the 1960s many of these trees were not yet saplings. They were planted by the Forestry Commission as part of a UK Government strategy to reclaim derelict coal mining sites nationally. The strategy wasn’t informed by local people and there are stories of residents cutting some of the trees down while they were in their infancy, for Christmas and sometimes just for exercise. Local people also witnessed many unsanctioned fires, which still take place every year. One local made it into the paper for putting out a fire: “I saw an old man, older than me, and I’d realised he’d set fire to the mountain. I took my jacket off and started beating it. I couldn’t believe what he had done.” These activities could be read as expressions of frustration with the Forestry Commission’s work. Certainly many locals openly express a preference for deciduous trees and open mountainsides and speak of the loss of favourite walking routes.

Members of the community who were employed to prepare the ground and plant the trees are proud of their involvement with the project and were drawn to the opportunity to work outdoors: “I’m very chuffed that I planted and fenced so much of it. We were a very select little band and when I go walking with the boys now I tell them how I planted those trees.” One resident stayed with the Forestry Commission for 45 years despite the low pay and the all-weather conditions. For that same forestry employee and others, the land became a site of historical interest after being encouraged by an office clerk to gather any Mesolithic and Bronze Age flint pieces that were coming up through the disturbed soil. Over 1,600 of those pieces now sit in the National Museum of Wales.

“I’d like more spots for people to go out, relax, listen to the trees, instead of being down with all the cars passing. A space to be mindful.”

Now that the plantations are well established, the relationships that local people have with the land have altered once more. Foragers have to work harder to access the winberry bushes that they could once get to in direct lines from their homes. Small groups of enthusiasts come together for bushcraft sessions, wellbeing walks and to dip in hidden pools. Where once young people would customize their bikes for the mountainsides, now mountain bikers use the routes provided by the forestry tracks. Looking to the future, a 16 year old resident reflected that only a small section of the population are spending time in the woods: “I’d like more spots for people to go out, relax, listen to the trees, instead of being down with all the cars passing. A space to be mindful.” A resident who has campaigned for many years for her community, stresses the need for local action: “We want to lead the way. We’ve got the resources on that mountain to help with climate change. If the legacy from the coal has left us anything, it’s a foot in that door with the climate change agenda, and how we can benefit from it through jobs and health and living our own values.”

We must continue to collect and record these stories from the land. The future of the landscape is not certain, but what is certain is that its people will be there reacting with, shaping it, speaking for it, at every turn.