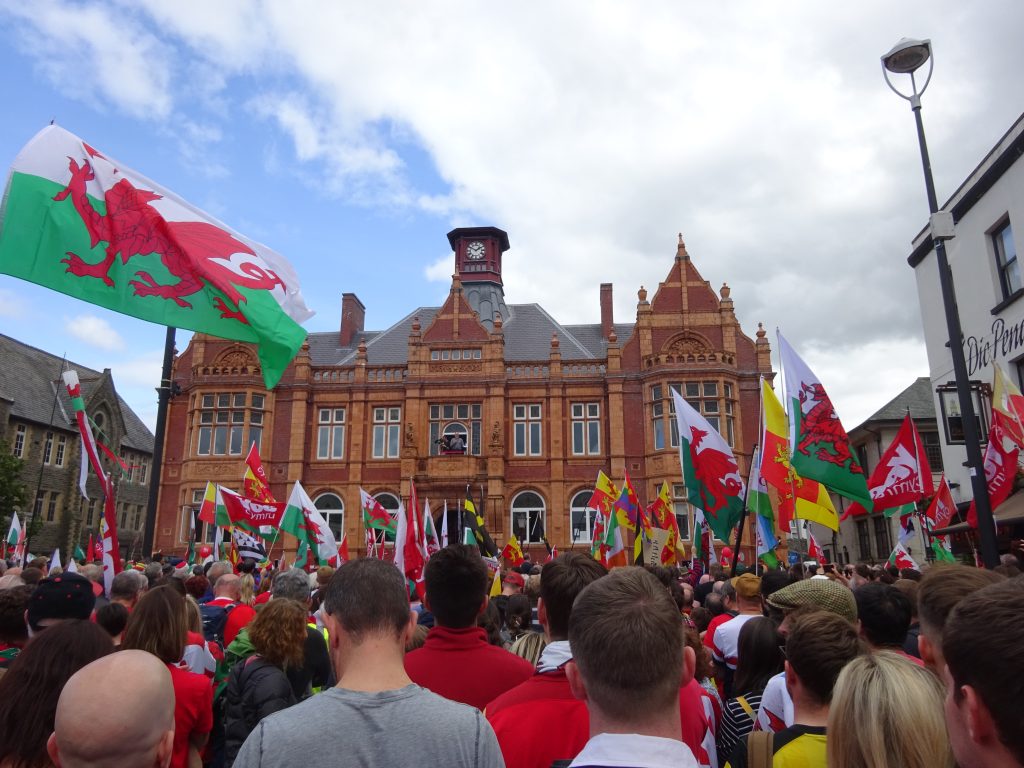 There is much debate around ‘radicalism’ in Wales.

A common outside interpretation is that this is perhaps unsurprising – with the last election confirming a Corbyn-supporting former academic’s position as First Minister with the joint-highest level of seats in Wales’ short devolved history, with a safeguard of an additional 13 seats won for Adam Price’s left-wing, independence-supporting Plaid Cymru. This creates a potent mix of over 70% of the Senedd’s seats won by parties rhetorically dedicated to radical reform of Welsh economy and society.

The Welsh Government often receives plaudits in the UK press and internationally for its bold ambitions – including the Well-being of Future Generations Act which the United Nations insists the rest of the world will one day follow, a Universal Basic Income programme, free prescriptions, and harmonious ‘social partnership’ between government, business, and employers.

But scratch the surface and the reality is closer to inertia. Wales is a world-leader in rhetoric surrounding future generations but is far from a world-leader in action on targeting carbon emissions or championing biodiversity within its own borders. There is scant evidence that the Well-being of Future Generations Act has done much at all to practically protect future generations in Wales. The IWA has proposed that the Welsh Government should focus its energy policy on driving economic success for Wales’ key renewable sectors: marine, bioenergy and housing, but Wales is far from being a world-leader in any of these areas. When it comes to reaping the economic rewards of a global energy supply transition – so fundamental to all economic activity – Wales is far, far, behind. Other nations stole a march on us in developing and exploiting sustainable technologies within their own borders and exporting it elsewhere, contributing to the vital systems transition and helping to enrich their own citizens and public services in the process.

On Basic Income there is better news: it is a genuinely innovative policy that will transform the lives of the 500 young care leavers the Welsh Government says will be eligible to join the scheme. We will watch any moves to make this welcome policy a permanent one with interest. But supporters of a Universal Basic Income will never have their wishes granted unilaterally in Wales due to the lack of financial firepower for the Welsh Government. If this move is made permanent it will change the lives of care leavers forever, but it will not achieve a much-needed restructuring of the Welsh economy and society. If it is not implemented permanently – and as yet there has been no discussion of this being done – it will be just another pilot that comes to little long-term consequence for people in Wales.

A Universal Basic Income may be towards the more radical end of policy proposals, but consider policies enacted by the UK Government. The cost of HS2 is currently estimated at up to £98bn. A slightly less economically important investment – the renovation of the Palace of Westminster – is set to cost anywhere between £9bn and £22bn.  On a side note, and for those who say any extra MSs are too expensive, the entire Welsh Parliament costs about £62m a year to run, with a £22bn Westminster renovation enough to fund it for 355 years.

Much of this Westminster spending is financed by borrowing. This is not a criticism – government borrowing to a certain extent is sensible and desirable. There is often scaremongering around governments running a consistent deficit, but if the money is borrowed cheaply with a high confidence in being able to service it in the future, it is often a shrewd investment decision. The household analogy is common here – voters are told that because you wouldn’t consistently ‘live beyond your means’ in personal spending, it is irresponsible for government to do so. However, this analogy falls at a pretty basic hurdle – households aren’t economies. Households aren’t underpinned by the economic activity of tens of millions of diverse individuals. Governments and economies are.

For example, borrowing to invest in areas such as research and development, to stimulate growth in the economy, is often a good idea and gives far more return in taxation than the cost of servicing cheap debt. If we must use the household analogy, then consider it spending £200 on a new suit for an interview and getting a £5,000 pay rise that pays back every year (it was the best I could do, sorry).

Running a government deficit financed by borrowing doesn’t just have to be geared towards proactively building the tax base – it can be reactive to events, too. The UK Government deficit in the financial year ending 2021 was £327.6 billion, a figure far higher than the norm due to the costs associated with the Covid-19 pandemic, such as the furlough scheme. The furlough scheme was particularly important in a fairly unspoken way – it proved that huge levels of crisis financing have been a policy option for the UK Government all along.

The IPCC has warned that scientists are observing changes in the Earth’s climate in every region and across the whole climate system – many of the changes observed are unprecedented over hundreds of thousands of years. Some of those changes will also be irreversible over hundred of thousands of years – like sea level rises. This is our most urgent challenge. The ‘future generations’ so often spoken of in Wales may ask why we were able to put together an extensive emergency funding package to protect our livelihoods within a matter of months, but failed to do so over decades when faced with the planet becoming uninhabitable through human action, knock-on effects to our food systems, unprecedented refugee crises, and wars of scarcity. They may also ask why Wales was so self-congratulatory about its own efforts as it failed to decarbonise, watched its biodiversity fall away, and watched on the sidelines as the West’s addiction to fossil fuels financed the invasion and mass killings by Russia in Ukraine.

Doing our bit towards tackling climate change is not our only challenge that government borrowing could contribute towards solving. Wales may have reduced its high levels of unemployment but it has low wages and salaries in comparison to other areas of the UK, despite rising costs. If the Welsh Government thinks this is an issue it can fix by the current policies of fiddling around the edges, it is kidding itself. The economic model of many countries (including Wales) is fundamentally broken, with a combination of over-regulation of trade unions (essentially banning workers from bargaining) and under-regulation of unscrupulous business practices contributing to an ever-increasing percentage of our national income going to capital (that is – those who own substantial shares of companies, landlords, and landowners) and an ever-decreasing percentage of our economy going to those who work to keep it going, despite consistent labour productivity increases. Nothing in the Welsh Government’s economic strategy can hope to override this wider context. The model is broken, and the Welsh Government does not propose to reform or replace the model.

The Welsh Government can only borrow about 4.5% of the potential final cost of the refurbishment of the Palace of Westminster

What does this have to do with government borrowing? Well, consider the examples of UK Government borrowing – a total deficit of £327.6bn during the Covid-19 pandemic, and as much as £98bn for HS2 and £22bn for the Palace of Westminster restoration. The Welsh Government’s borrowing powers, however, are capped at £1bn of capital borrowing total – with £150m (15% of the total) allowed in a single year.

Despite having pretty significant responsibilities over healthcare, education, economic development, Wales’ trains and roads, and local government, the Welsh Government can only borrow about 4.5% of the potential final cost of the refurbishment of the Palace of Westminster. This is a huge lack of fiscal firepower – even Welsh Water can issue bonds, raising £500m in 2020.

This has a sizeable impact on all policy-making in Wales. The Welsh Government cannot in practice cease funding our National Health Service, schools, or transportation systems. Although it has some tax-raising powers, most of its budget is simply decided in Westminster, handed to the Welsh Government, and then duly passed on again to these vital public services. There is no real budget for the kind of transformative change that Wales so desperately needs or that its politicians say they are dedicated to. The fiddling around the edges and consistent frameworks, strategies, and pilots that Welsh public policy is so often reduced to is, in many ways, baked into the system.

With a historical legacy of under-investment in the things that spur growth such as research and development and infrastructure, Wales’ status as an underdeveloped peripheral region of the UK may be cemented in place under the current system

There are other consequences of this lack of financial firepower, too. With much of Wales’ budget essentially set in Westminster as a result of the Barnett Formula and spending in England (and with little practical say from the people of Wales or its elected government), there is a big question as to whether Wales can ever truly ‘catch up’ with wealthier areas of the UK. With a historical legacy of under-investment in the things that spur growth such as research and development and infrastructure, Wales’ status as an underdeveloped peripheral region of the UK may be cemented in place under the current system. This is for a number of reasons. The historical over-investment in London and the south-east of England attracts private sector investment. It may be the case that Wales’ current fiscal framework simply does not come close to closing this historical funding gap of public and private investment, and does not allow Wales to borrow to invest in order to grow its tax base or restructure its economy in any fundamental way to combat this.

This is the hypothesis we are testing with our new short research paper looking at Wales’ fiscal framework in the context of truly transformative policy-making. We will be questioning whether the way Wales is funded pushes it towards expensive forms of private financing to build hospitals, prevents it from proportionate action on the climate crisis, turns the Welsh Government into middle-man between UK Government and public services rather than a real government, and ultimately prevents Wales and the decision-makers who represent and lead it from engaging in policy that truly improves the lives of Welsh citizens. If you’d like to contribute to the project, please get in touch.