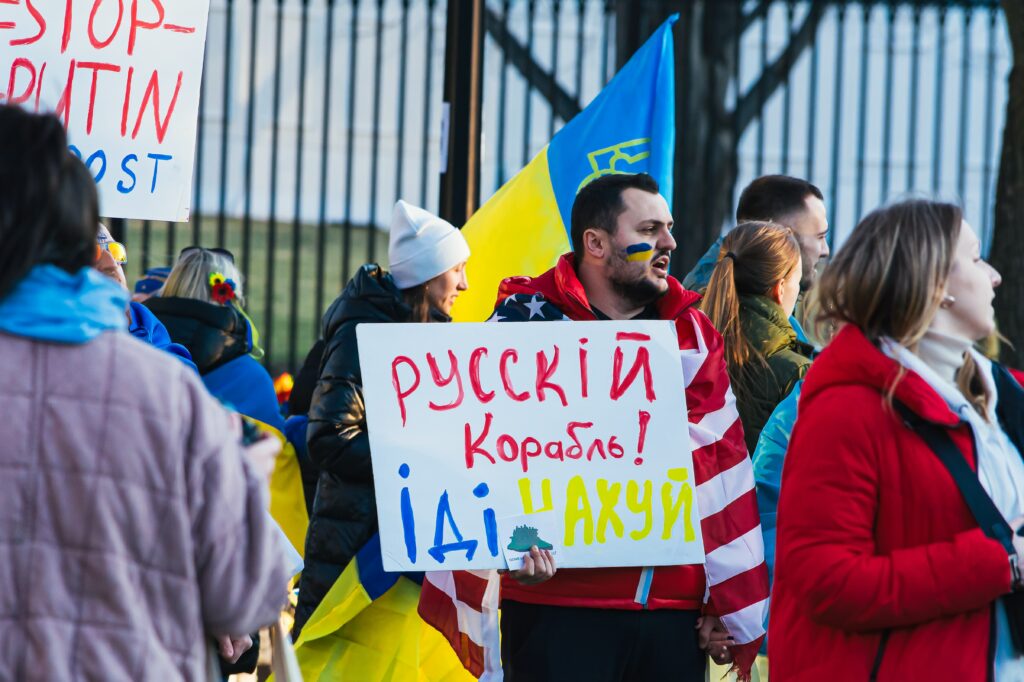 Jennifer G Mathers looks beyond the stereotypes to praise the role of Ukraine’s women in resisting the Russian invasion.

Where are the women in Russia’s war in Ukraine?

In many respects, this conflict is remarkably male-dominated. The key decision makers at the national level in both countries are almost entirely men. Ukraine’s President Volodymyr Zelensky only has one woman in his cabinet (Minister of Social Policy Maryna Lazebna) while the Security Council that deliberates on the most important matters of war and peace in Russia also has only one woman member (Chair of the Council of Federation Valentina Matvivenko). Men make up the overwhelming majority of those who are fighting this war on both sides, and so far it is exclusively men who have sat down at the negotiating table to discuss the terms for a future peace deal.

As often happens in war, women seem to have been relegated to the margins, and to roles that appear to involve very little in the way of action and choices: supporting their menfolk in the armed forces; as refugees fleeing their homes, usually accompanied by young children; or as the victims of attacks by Russian forces. Even the phenomenon of a substantial number of Ukrainian women in military uniform, which so fascinates the world’s news media, has been represented in very stereotypical ways that conceal the range of their contributions to the country’s capacity for resisting the Russian invasion. We could be forgiven for assuming that there is really very little of substance to say about women and the war in Ukraine.

But the roles that women play in wartime are almost always deeper and more significant than they appear at the time, and Russia’s war in Ukraine is no exception.

The idea of women providing support for soldiers in wartime may sound like a minor contribution to the war effort, but women are playing a central role in providing the Ukrainian army with essential equipment and have been doing so since the beginning of the conflict in the Donbas back in 2014.

Deep-seated corruption in Ukraine’s Ministry of Defence meant that state resources intended to train and equip the country’s soldiers had been steadily siphoned off throughout the 1990s and early 2000s. As a result, when Russian-backed warlords seized control in Donetsk and Luhansk and backed up their statements about secession from Ukraine with armed force, the government in Kyiv was completely unprepared to respond.

The crisis inspired an influx of volunteers to help fill the ranks of the military. But while these new recruits helped to reinvigorate Ukraine’s armed forces, as an institution it was still painfully under-resourced. During the first few years of the war, it was grassroots organising by Ukrainian civilian society that provided the Ministry of Defence with vital supplies. Charities sprang up overnight to collect donations of warm clothes as well as money to buy equipment ranging from helmets to drones, and to transport them to the fighting zone. Women played leading roles in this effort, especially in the smaller charities, many of which were organised and staffed entirely by women volunteers.

Thanks to a serious effort at reforming the Ministry of Defence and tackling corruption, and to an injection of funds from NATO, in recent years the need for crowd-funding the war diminished considerably. The invasion of Russian forces that began on 24 February 2022 created new needs for such support on a scale much larger than previously envisaged. With so many of the country’s men serving in the military, this work has fallen on the shoulders of women to an even larger extent than previously.

One very specific form of support for the Ukrainian military that has become particularly associated with women is the making of camouflage nets. Like the collection and delivery of other provisions for the military, this is a practice that began back in 2014 and has intensified since the start of Russia’s invasion in February. It has become common for groups of women in a community to come together to cut up old clothing, blankets and other fabrics and to weave the strips onto fishing net in zigzag patterns before dispatching them to the front lines. The common experience of doing something practical to support the war effort helps to strengthen the bonds of civil society in Ukraine and to encourage a sense of community and common purpose – precisely the intangible forces that hold a society together during a crisis and which have been so essential in providing Ukrainians with the determination to resist Russia’s attacks and to fight back.

Millions of Ukrainians have now fled their homes in the conflict zones, either to other areas of Ukraine or abroad. With the ban on men of fighting age leaving the country, the vast majority of refugees are women, many accompanied by dependent children. We might think of refugees as helpless, tossed this way and that by the fortunes of war. Indeed, disturbing evidence is coming to light of unscrupulous people seeking out Ukrainian refugees to abuse and exploit them. But at the same time it is important to recognise that every person who has left their home has made a decision, and most likely a series of decisions, involving weighing the risks of staying against the risks of fleeing. It is rarely clear which course of action is the safer one, but those decisions nevertheless have to be made.

The millions of Ukrainian women who have decided to seek refuge abroad now have the complex and difficult responsibility of keeping themselves and the children in their care safe and meeting their material needs. But even beyond the daunting tasks of travelling through a war zone and setting up a household in an unfamiliar country, these women are under pressure to look after those children’s cultural needs. At minimum, this is likely to ensure that they continue to speak Ukrainian with the children, even while acquiring or improving the language skills that will enable them to function in their places of refuge. But it also involves maintaining the traditions of home, keeping alive the memories of family, community and nation, as well as forming and sustaining bonds with other Ukrainians, both in the diaspora and those back in Ukraine. The longer this war lasts, the more difficult it will be to maintain strong cultural ties to home.

The scale and significance of Ukrainian women’s contributions to their country’s war effort is enormous, although to see it we need to pay close attention

As we learn more about the conditions of Ukrainian communities under the control of Russian forces, we are increasingly seeing Ukrainian women in the role of victims. The horrific treatment of civilians at the hands of Russian soldiers has included abuse, torture and murder, and for women and girls, often rape as well. The reasons for the prevalence of rape in war are complex, but they often relate to the exercise of power by soldiers over civilians in their control, along with the desire to inflict long-lasting suffering and humiliation on their enemy.

But even as we feel shock, outrage and pity for the plight of these women, we should also be aware of the ways that they have resisted and continue to resist the Russian invaders. Many of the women who chose to stay in their homes and face the danger of an attacking army did so out of a sense of responsibility towards others – for example, as the carers of those who cannot easily be evacuated because of age, disability or illness. Others remained to carry out official or unofficial leadership roles in their communities.

More and more reports are emerging of women-led initiatives within communities to share food, organise patrols to watch for danger, check on neighbours and ensure that everyone has access to a place to shelter.

Women have participated in public displays of defiance in the face of Russian soldiers as well as collecting and passing on valuable intelligence about the positions and capabilities of Russian forces.

When the worst happens, women have also been in the forefront of efforts to collect and verify the evidence to enable war crimes prosecutions to take place in the future.

Ukrainian women have also been resisting the Russian invasion by taking up arms, either as part of the regular army or by joining the territorial defence forces. Even before the February invasion the Ministry of Defence reported that more than 20% of the armed forces were women.

International news media outlets are full of stories about the apparent novelty of large numbers of women in uniform. But while they present Ukraine’s women soldiers in a very sympathetic light, their depictions rarely go beyond the standard stereotypes.

It is common for journalists to juxtapose the masculinity of their uniforms and weapons with reassuring indications that these extraordinary warriors are still women: they wear makeup and nail varnish; before the war they were doing typical women’s jobs (working as hairdressers or school teachers); and they are marrying fellow soldiers in impromptu ceremonies at the front.

The focus of much of this media coverage obscures both the substantial work that they are doing as part of their units and the ongoing struggles that they face to be accepted by their male comrades in arms.

The scale and significance of Ukrainian women’s contributions to their country’s war effort is enormous, although to see it we need to pay close attention. The gap between the male-dominated actions at the national level of presidents, diplomats and military leaders and the female-dominated work at the grassroots gives the mistaken impression that men make things happen in this war while women are its passive victims. In many ways it is precisely the opposite: without the many individual and small-scale efforts, Ukraine would not be able to mount such an effective resistance in the face of such enormous odds. Let us hope that Ukraine remembers the contributions of its women when this war is finally over.