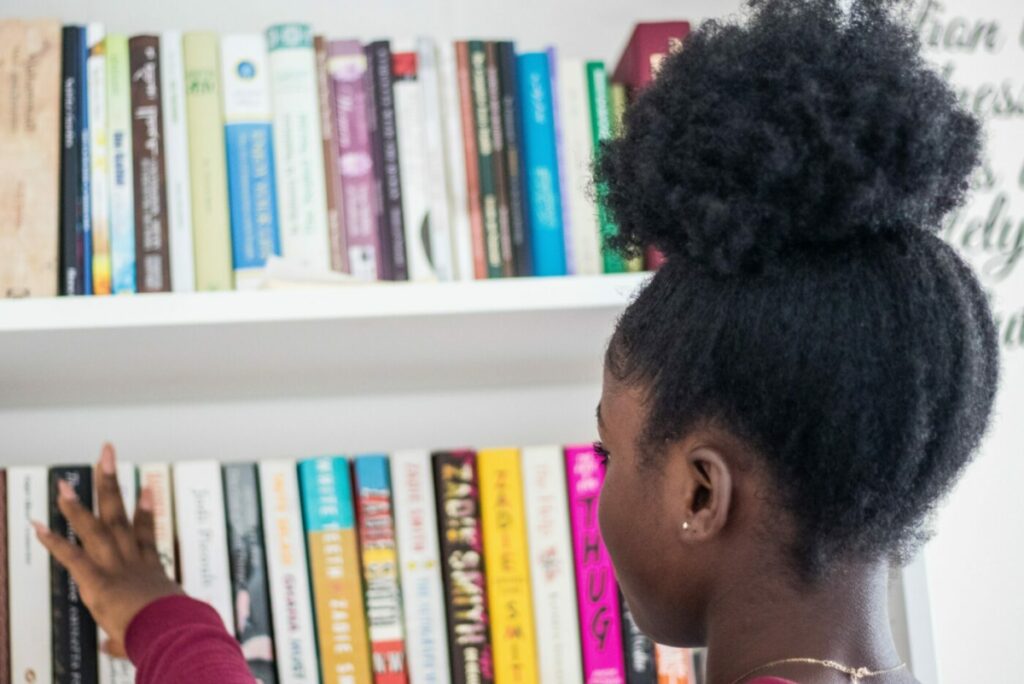 Jessica Dunrod and Gwenllian Lansdown Davies argue that anti-racist practice within Early Years provision is the place to start to ensure the Welsh language belongs to everyone.

In 2021, Black Welsh children’s author Jessica Dunrod coined the term ‘the Elsa Effect’ to describe the ubiquity of the main character from the Disney film Frozen at the expense of more diverse characters.

Dunrod argues that the ‘Elsa Effect’ is a direct legacy of slavery and colonialism – still manifested in contemporary Wales by under-representation in children’s literature, and replicated in animation, entertainment, and other depictions of communities within society. Very recently, the casting of Halle Bailey as Ariel in Disney’s Little Mermaid has revealed racism at its ugliest with some arguing that a fictional mermaid could ‘scientifically’ never be Black. This debate beggars belief.

Within the Black community, Berry-as-Ariel is the representation our children have always needed, a small antidote to the ‘Elsa Effect’ for Black and global majority families.

‘Give me a child until he is seven and I will show you the man’ is a saying attributed to both Aristotle and St. Ignatius Loyola. It supports the view – espoused by the UN, WHO and various charities – that adult life chances are directly impacted by the Early Years (broadly the 0-7 age range in a child’s life) and that experiences in this period are foundational and formative. Many disciplines and studies – such as Harvard’s 84-year longitudinal study into adult development – concur with this view.

Ideas about race do not exist in a vacuum and therefore we need to critically examine depictions and representations – or as the ‘Elsa Effect theory’ illuminates, the lack thereof – within those social, educational, and cultural artefacts, cultures and environments which surround us and our young children in Wales.

The curriculum for Wales emphasises nurturing ‘ethical, informed citizens’ who possess ‘empathy’ and ‘are knowledgeable about their culture, community, society, and the world, now and in the past’. This emphasis on a multi-dimensional, iterative understanding of cynefin at the heart of the curriculum provides Wales with an inter-generational opportunity to challenge stereotypical ideas about Wales, Welshness and Welsh identity and the World.

Mudiad Meithrin, a Welsh-language Early Years enabler and provider, believes that all children should have the opportunity to become confident Welsh speakers. As an Early Years provider and publisher, Mudiad Meithrin are also uniquely placed to work in opposition to the Elsa Effect, negative colour connotations, and lack of representation.

The organisation wants to establish more inclusive representations and narratives of minorities in Wales, and are already building on the Welsh Government expectation outlined in October 2021 that all children in Wales are taught about Welsh history in its diversity and complexity. We think serious attention is needed to better understand this important area of work which is at the foundation of the Welsh Government’s recently-published Anti-Racism Action Plan for Wales.

The first 1001 days of a child’s life are critical. Beliefs and attitudes begin to be formed and crystallised at an early age, and research suggests that very young children glean views and bias through peer-to-peer interactions and by the influences around them – their relatives and carers’ behaviours and the worlds of animation, gaming, books, toys, advertising. Movements such as Let Toys be Toys arose in recognition of this influence, campaigning to combat reductive stereotypes transmitted through gendered toys and books.

Through both professional and lived experience and knowledge, we believe that the same influence is exerted on children in terms of ideas about race and colour. No child is born racist, but children can absorb racist and prejudiced views based on what they hear at home, what they see and critically what they do not see in the world around them, and how they learn through play in either a childcare setting, school and community.

These formative experiences can impact children of all races. Black and Brown children can absorb feelings of self-loathing, self-hate and mental illness, with lifelong implications. Due to their different life experiences, white children can be oblivious to such issues and feelings, but they can perpetuate stereotypical and negative views precisely because of their lived cultures and pervasive influences on them.

Ideas about race do not exist in a vacuum and therefore we need to critically examine depictions and representations – or as the ‘Elsa Effect theory’ illuminates, the lack thereof – within those social, educational, and cultural artefacts, cultures and environments which surround us and our young children in Wales.

Indeed, it is no secret that there is a severe lack of diverse representation in Welsh literature, but do we really know yet how this impacts children?

We understand the extent to which Black authors, Asian and non-white characters are underrepresented in British children’s literature thanks to reports such as ‘Reflected Realities’ published by the Centre for Literacy in Primary Education (CLPE), which found that only 5% of books published in 2019 featured a Black, Asian, or underrepresented character. These alarming figures reveal that we are eight times more likely to find an animal as the main character in a book than we are to find a human character who is Black, Brown or from a minority ethnic community.

So how does this affect a child’s self-esteem? How does this impact the way children see or don’t see a diverse and true reflection of people in Wales? Do we truly understand how underrepresentation affects children? More collaborative and funded research is vital if we are to find a way forward.

The ‘Elsa Effect’ summarises this internalised self-dislike. The idea was inspired by ‘The Doll Test’ (Brown University Vs Board of Education 1940), an experiment that involved children from a range of different backgrounds, sitting in front of dolls which differed only by skin colour. Participants were asked a series of questions which they answered by selecting the doll which best suited their answer. All children, including Black children, selected the white doll to answer positive questions such as ‘which is the pretty or intelligent doll’, and selected the Black doll to identify negative traits, revealing deeply seated negative racial stereotypes.

This experiment – replicated at later dates with similar results – demonstrates that racism and harmful stereotypical beliefs are learned behaviours, acquired at as early an age as three or four. It also points to the responsibility that Early Years settings have in challenging such behaviours through positive, inclusive provision to nurture racial literacy alongside emotional literacy.

Ever since the Donaldson Report was first published in 2015, educators and practitioners have been thinking about the potential of the new Curriculum for Wales to instigate change for the better based on the best aspects of Foundation Learning pedagogy and on children’s innate curiosity to explore new ways of knowing, being and doing.

The research and work achieved by Professor Charlotte Williams and the ministerial working group have spotlighted the potential of the new curriculum with its emphasis on cynefin to create a new lexicon and new context for how conceptions of race, identity and Welshness are construed and constructed.

Alongside the work of Professor Charlotte Williams and the mandatory expectations outlined in policy reform by Welsh Government in 2021, multi-disciplinary practitioners and pracademics in DARPL and the B.A.M.E-Ed Network Cymru have created spaces for dialogue focusing on diversity and anti-racist professional learning through challenge and support.

Considering a shift from non-racist to anti-racist approaches within the realm of the new curriculum is clearly challenging and is inspiring both policy makers and educators to embed these core values into practice. This approach can strengthen Welsh Government’s Anti-Racist Action Plan for Wales to help realise the expectation for our anti-racist nation whilst future-proofing this for future generations through education.

This area of work is not without controversy and complexity. Alarmingly, a few weeks ago, Liz Pemberton, ‘The Black Nursery Manager’, was criticised in England for professionally tackling (or even mentioning) race and colonialism in the context of the Early Years. This perspective echoes the highly polemical debate in the US about teaching critical race theory in schools. The argument goes something like this: ‘Children are too young to understand this… children are all created equal… children don’t see difference… treat all children the same’. Whilst it is perfectly right and laudable and a legal requirement that children, like all citizens, should be considered as equal, it does not follow that this should mean ignoring difference and not celebrating diversity and uniqueness. Equity needs to be the focus.

It could be argued that part of the challenge and context of our new curriculum and cynefin is to celebrate those cynefinoedd o gynefinoedd and communities of communities as one obvious way of allowing for multiple identities and children who are knowledgeable about the inherent diversity all around them. Policy makers and reformers in Wales seem to agree, given the consensus that the curriculum and Welsh education policy (2021) expects that the contributions and presence of Black, Asian and Minority Ethnic people in Wales be mandatorily included in Welsh history.

As a nation, our shift in approach to history needs to start through storytelling in the formative Early Years.

One challenge is how to counter long-standing arguments that children are not taught enough Welsh history and that teaching the history of people of colour would take away valuable time. The New Curriculum is recognised as a shared opportunity to right past wrongs,whereby Welsh history in all of its complexity has been ignored and omitted at best or at worst deliberately mis-told, mis-shaped and mis-construed.

While stories about Black and Brown Wales and the histories of those marginalised by canonical depictions of Welsh history have begun to be challenged and changed (by contemporary pioneers such as Charlotte Williams, Glenn Jordan, Gaynor Legall, Alan Llwyd, Simon Brooks, and others), educators and Early Years practitioners have so far been slow to respond.

As a nation, our shift in approach to history needs to start through storytelling in the formative Early Years. A drive for equity and inclusivity has always been a cornerstone of the Early Years,  which have always focused on teaching children about kindness, empathy, friendship and, to a lesser extent, on celebrating difference.

At last we are now seeing an emerging canon of resources which look at anti-racist professional learning and practice in childcare settings, Early Years, and the play sector created in partnership  by academics, professional learning providers and diverse community organisations and individuals.

Mudiad Meithrin, along with its partners within the sector (CWLWM) and DARPL, has responded to the context provided by the new curriculum, the emphasis on ‘Cynefin’ and the influence of ‘Black Lives Matter’ by focusing on a number of interventions:

These are just a few practical examples of current policy initiatives, interventions and interpretations. The overall impact is driven by a desire to become an anti-racist organisation (thereby accepting and challenging our own white privilege) through self-enquiry and to recognise the inherent complexity of doing so within a minority language or minoritised Welsh language context.

We know from 2011 Census data that there are approximately 10,000 Welsh speakers who are Black, Asian or from an ethnic minority. We suppose that the number will increase when the 2021 Census data is published but note that there is a long way to go until all children – regardless of race or ethnicity – feel that the Welsh language belongs to them.

Jessica Dunrod will be speaking more about the importance of Representation in Welsh literature at the National Library of Wales on 27th October 2022. For more information about her work, you can visit her websites www.Ambassadora.co.uk and www.LilyTranslates.co.uk

Gwenllian Lansdown Davies is a former Welsh Plaid Cymru politician, a former County Councillor for Riverside, and Chief Executive of Plaid Cymru between 2007 and 2011. She is currently the Chief Executive of Mudiad Meithrin.
Jessica Dunrod is a Cardiff writer and linguist and believed to be the first Black children's author born in Wales.