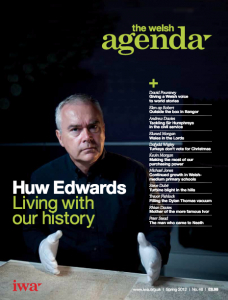 A Welsh brand to die for

When borders are crossed

Daniel G. Williams discusses two new editions of Raymond Williams’ work which chart the long revolution through which we continue to live.

Wales in the House of Lords

Boxing clever in the land of the pulled punch

A few pearls amidst much wishful thinking

Stephen Palmer says we need to capture a sense of urgency about our lifestyle deficiencies.

New strategies for dealing with self-harm

Future of One Planet Wales

Oh to be a pilgrim

Living with our history

From the Cape to Cwmdu

The man who came to Neath

The antagonisms between Labour and Plaid Cymru

A party well served by its historians