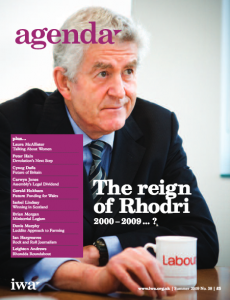 Laura McAllister says women should dare to be different in tackling the more subtle discriminations in Welsh public life.

In the wake of the Euro elections how can we promote political engagement?

Peter Stead reflects on the First Minister’s contribution to the birth of the new Wales.

Peter Hain urges caution in pressing ahead with a referendum on more power for the Assembly.

Carwyn Jones says a debate is needed on creating a separate jurisdiction for Wales.

Page 24 – Wales and the Matter of Britain

Cynog Dafis admires the way a Welsh Conservative is seizing the constitutional initiative.

Geraint Talfan Davies examines an account of a reconstruction underway behind the facade of the British state.

Isobel Lindsay assesses the record of the SNP minority government.

Page 30
Ministerial logjam frustrates economic dynamism
Brian Morgan argues that if the economy is not improving by 2012 we will need to bring back the WDA.

Page 33
An ethical alternative to the Casino Economy
Kevin Morgan and Jenny O’Hara Jakeway say mutualism is an idea whose time has come once more.

Page 36
Tax Powers under the microscope
Gerald Holtham unravels the debate over funding the National Assembly and the Scottish Parliament.

Page 38
Welsh Budget Squeeze
Eurfyl ap Gwilym explains how Wales has lost out in public spending over the last decade.

Page 41
For Whom the Bridge Tolls
Nick Morris investigates obstacles to removing charges on crossing the Severn Bridge.

Page 46
In place of fear
Richard Bowen argues we should think creatively about placing Wales at the heart of the international search for peace and security.

Page 54
Applying the Precautionary Principle
Nic Lampkin says organic farming should not be evaluated in terms of the GM debate.

Page 57
Save money and the planet
Simon Nurse on how being environmentally friendly makes sound business sense.

Page 59
Fog in the Severn
Madoc Batcup examines the UK government’s options for generating tidal power off the Welsh coast.

Page 61
Turbine threat
Mike Evans reveals the impact a barrage would have on the Severn Estuary’s fish population.

Page 72
Our place in the online world
Andrew Green reports on an ambitious project to put Wales on the Web.