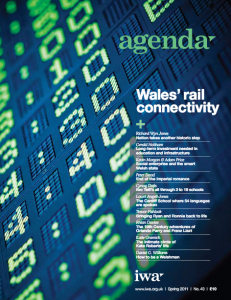 We need some courage and a bit of flair

Take your new partners for the dance of death

Outlook: After the referendum

‘This is nothing to do with nationalism is it?’

Taking control of our own destiny

A new voice for Wales

Running our own railroad

The easiest, and fastest route

Robust response to the recession from Welsh business

Despite the cuts some of us are doing well

End of the Imperial romance

No silver bullet in service delivery

Jon House questions whether outsourcing can save money

Targets must be accompanied with freedom in our schools

The serpent inside England’s health reform

Carbon dioxide is not the only major problem

Cutting Back on Hypermobility

Bringing Ryan and Ronnie back to life

The intimate circle of a writer’s life

When he wore a cloth of gold

How to be a Welshman

A poet of loud desperation

L.G. as  viewed through the prism of high Westminster politics

A penchant for bad news

A few strong men would help