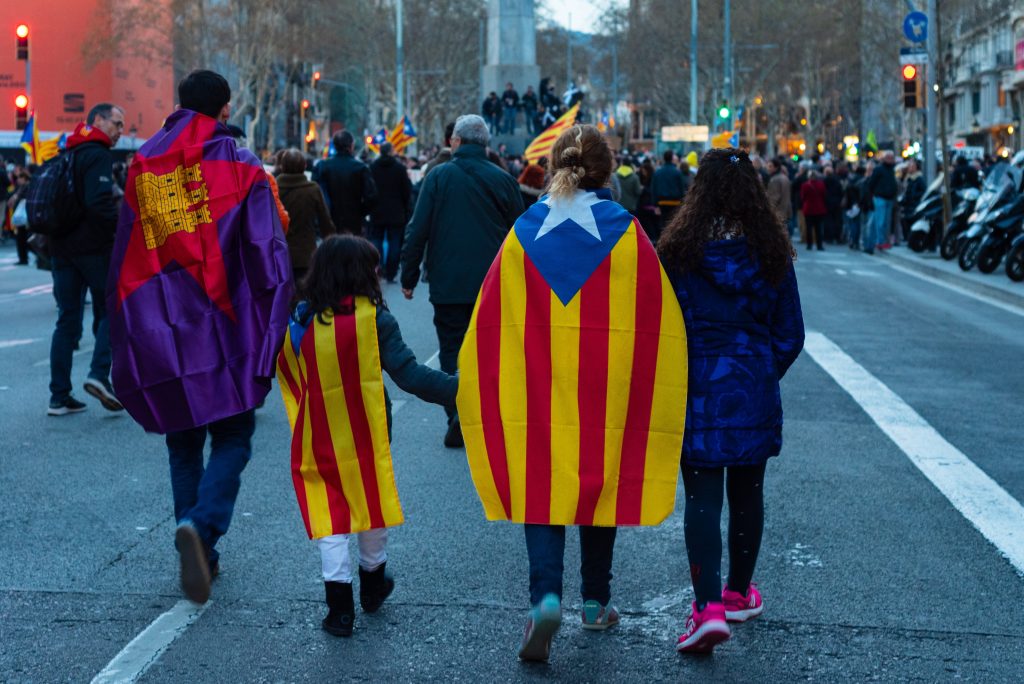 Adam Johannes reflects on the injection of socialism into the nationalisms of Scotland, Catalonia and Quebec, and considers what it all means for Wales

This article originally appeared in the welsh agenda: issue 62 (Spring/Summer 2019)

‘We have now reached the point of no return. This is the beginning of the end of the regime of 1978 and the Kingdom of Spain.’ It’s October 2017 and I am speaking at a protest in Wales called to condemn Spain’s use of rubber bullets and repression against Catalans seeking to vote in a peaceful ballot on independence.

Over that month Catalonia witnessed scenes of mass civil disobedience not seen in a Western European country in the last forty years. Our protest does not demand people take a position on Catalan independence, but rather calls on people to support Catalans’ democratic right to decide. After all, Canadian and British governments, despite opposing independence movements, were able to come to arrangements with the parliaments of Quebec and Scotland to facilitate independence referenda. Spain uniquely argues such a referendum would be unconstitutional.

In a globalised world, where only a few years ago some argued the nation state was receding in importance, and amid the advance of transnational corporations and bodies like the World Trade Organisation (WTO), International Monetary Fund (IMF) and NATO, the continued growth of independence movements in places such as Quebec, Scotland and Catalonia that are part of advanced Western states might seem like an anomaly.

In retrospect, 2008 was watershed moment. The years after the banks crashed saw central governments imposing unprecedented austerity on their populations, flashpoints such as Catalonia in 2017 or Scotland in 2014 – where the pro-independence vote proved much higher than initially expected – are part of the same implosion of politics-as-usual that happened across the world.

While right wing populism is now much on people’s minds, it is wise to remember that much of the energy has been on the left, in social movements like the Arab Spring reacting against decades of dictatorship in Middle East and North Africa, Occupy Wall Street protesting global inequality or the Indignados (The Indignant) occupying public squares across Spain raising slogans like ‘They don’t represent us’, ‘We are not objects in the hands of bankers and politicians’ and ‘Real Democracy Now’. For a brief moment, with the rise of Syriza in Greece and Podemos in Spain, it looked like radical left wing governments might sweep across Southern Europe. Tragically Syriza’s capitulation to EU and IMF demands for further austerity killed that moment; though Portugal, bucking the current European trend, now has a government increasingly public spending rather than cutting it.

Across the Atlantic, the election of Donald Trump detonated the biggest protest movements in America since the 1960s while the rise of Bernie Sanders has been followed by the election of new young radical left wing politicians. The most well known, Alexandria Ocasio Cortez, is currently putting forward a solution to both the economic and the climate crisis: a ‘Green New Deal’, based on public spending to build green-infrastructure in order to create millions of green jobs, funded by a massive wealth tax on corporations and the rich.

In this climate, large centralised states on the neoliberal model like Canada, Spain and Britain appear increasingly dysfunctional and bloated. The idea of secession is appealing to new audiences: smaller-scale nations offer the possibility that democracy might be closer to the people and cultural diversity celebrated.

In Scotland, it was noteworthy that independence won widespread support from ethnic minorities and recent arrivals, with Scottish nationalism offering a more inclusive model of citizenship than British nationalism. Most commentators also argue it was in poor and working class communities where support for independence surged in the final weeks of the referendum as Scotland’s inequalities were repeatedly highlighted. A land where a million live in inadequate housing, quarter of a million go hungry and in-work poverty is widespread responded positively to the message summed up in a popular slogan: ‘Britain is for the rich, Scotland can be for everyone.’

As Cat Boyd, a leading figure in the Radical Independence Campaign, later reflected: ‘If the working class were the only ones to vote in the independence referendum, there would have been a Yes vote… In Scotland’s poorest areas, all of which are traditional Labour heartlands, the argument for independence to create a socially just Scotland was won. A Yes vote became a revolt against the alienation of the British state and the British economy… All analyses of the referendum result have agreed that there is a linear relationship between unemployment, poverty and a higher Yes vote…’

Another phenomenon, little commented on, has been the recent rise of a hard-left currents in independence movements; these eschew more traditional concerns around national identity and national oppression. In Scotland, former members of the Socialist Workers Party played a central role in the popular Radical Independence Campaign; in Catalonia, an anti-capitalist party, CUP, with several elected politicians, were central to the strategy of popular confrontation with Spain. And this year saw the launch of Undod in Wales, an explicitly radical socialist independence campaign.

Last autumn I caught up with an old friend from Quebec who updated me on developments there in provincial elections. The two traditional parties who traded power for decades were hammered. A new right wing populist party won the elections, while a radical left wing party, Quebec Solidaire, had a breakthrough, displacing the traditional independence party, Parti Quebecois.

Quebec Solidaire’s election campaign centred on the issue of ecology with the party offering to create thousands of climate jobs, and to slash bus and tube fares as the first step towards free public transport and the creation a fossil fuel free Quebec.

Living in Wales, for a long time I felt antipathy towards Welsh independence. I found Welsh nationalism parochial and provincial. Politics based on national identity has always made me uncomfortable and the romantic rhetoric of Welsh freedom left me cold. Where is the ‘freedom’ in leaving Britain to form a smaller version run by middle-of-the-road politicians? What virtue in abandoning comrades on the English left to form a separate struggle when our Britain-wide movement once achieved for people on this island one of the best welfare states on the face of the earth? Occasional comparisons made by some Welsh nationalists between our situation and Palestine or Kurdistan still strike me as ridiculous.

When the referendum on Scottish independence was announced initially I secretly hoped that David Cameron would smash the Scottish nationalists and repeated the cliche that a worker in Glasgow had more in common with a worker in Bradford, Leicester or Cardiff than a Scottish boss. But I was also surprised seeing many old Scottish friends from far left backgrounds, who had always been antipathetic towards the SNP, supporting independence. Had they drunk the nationalist Kool-Aid? Oddly many of them had written erudite articles deconstructing stock tropes of Scottish nationalism and criticising the SNP. A few weeks before the referendum at a socialist conference in London I heard Pete Ramand and Chris Bambery from the Radical Independence Campaign gave a presentation. I recall afterwards feeling strangely hopeful and energised. Reflecting on this unexpected positive reaction, I suddenly realised it was the first time I had heard anyone argue a ‘non-nationalist’ case for independence.

Neither speaker made any reference to being oppressed by the English or Scottish identity. Instead they located their movement politically in the wave of anti-austerity struggle across Europe. People were fed up of Westminster’s two-party system and saw no future in a Britain where the entire political spectrum was wedded to neoliberalism, endless wars, and austerity. The idea of a new state was firing imaginations. There were endless debates and discussion. People asking how could a new Scotland do everything completely differently to the UK? Could Scotland break with ‘anglo-globalisation’ and become more like a Nordic welfare state?

They also mentioned that when the referendum was first announced the official Yes campaign was so boring and uninspiring: grey men in grey suits. The SNP did not want to scare people, so had emphasised that independence would merely be a gentle evolution emphasising continuity with the UK. An independent Scotland would retain the Queen as head of state, the pound, NATO membership and so on.

Contrastingly, the Radical Independence Campaign took the opposite tack – arguing that independence could be a moment of rupture with everything that had gone before and everything could change. They organised mass canvasses of working class and deprived areas. The idea of a rupture with neoliberalism electrified Scottish public opinion.

Addressing a common left wing argument about a united struggle of the entire British working class, Chris Bambery quipped that if your wing of the prison had an opportunity to escape, you wouldn’t say no we must wait till the whole prison rises up, you would get out and maybe smuggle in the key in a cake to those who remained. An independent Scotland would not be about walking away from the rest of the UK, but rather taking the argument back into the rest of the UK. If Scotland could do things better it would inspire people in England that there was an alternative.

The speakers also argued that British nationalism – from invading other people’s countries to Gordon Brown’s rhetoric of ‘British jobs for British workers’ and Tory and Labour racist scapegoating of migrants and Muslims – was a bigger threat than Scottish nationalism.  The British state was a flawed political project based upon ultra-centralisation, hollowing out of democracy, and a bloated economy of banks and tanks.

After the talk I began following on social media many groups, figures and websites from the independence movement: Radical Independence Campaign; Women for Independence; National Collective – a collective of artists and creatives arguing for a better Scotland; CommonWeal – a left wing think-tank taking inspiration from the Nordic model of welfare state. Vibrant campaigns were emerging: the Living Rent campaign arguing for rent controls and secure tenancies, and Better than Zero, that used a mixture of traditional trade unionism, community organising and direct action to fight for the rights of people in casualised and precarious employment and zero hour contracts.

With the mainstream alternative on offer to Tory austerity in the rest of Britain being Labour’s austerity-lite, the movement in Scotland seemed a bright ray of sunshine amid the grey. The social movement around Scottish independence, with a strong social-democratic character arguing for an end to austerity and nuclear disarmament, ultimately helped revive an anti-austerity movement on the streets of England and Wales. The SNP’s membership surge was followed by a Green Party surge and then the Corbyn surge, as the desire for an alternative surging through British society sought a vessel in mainstream politics.

So where do I stand on Welsh independence today? Power and control are central to my politics. As a socialist, I support the distribution of power across different state and international forms with each level having the fullest possible control from below.

But there is a danger that if there is no strong international socialist movement across borders that we simply end constrained by the state that exists and arguments develop within those constraints. Small nationalist and secessionist movements too often end up being a compromise between forces from both left and right.

Nevertheless, if a powerful left wing movement rejecting neoliberalism crystallised around independence as a means to break with the politics of austerity and war, I would support it. At present I am agnostic.