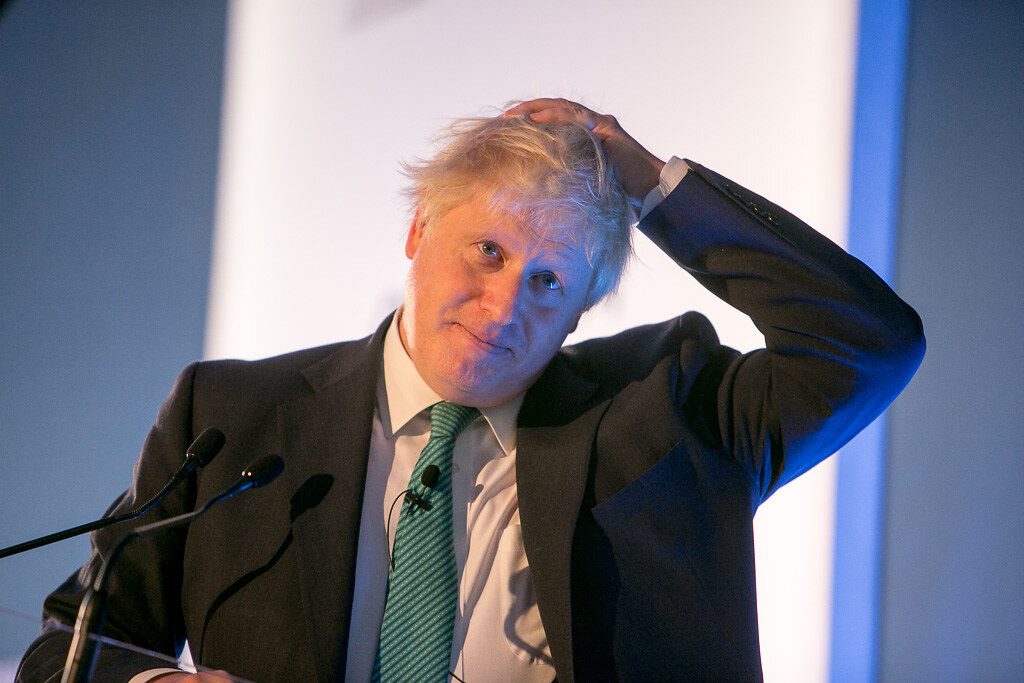 Geraint Talfan Davies writes that we should be under no illusions; Boris Johnson’s desire is a no-deal Brexit.

Rt Hon Boris Johnson MP, Secretary of State for Foreign and Commonwealth Affairs, UK by Chatham House is licensed under CC BY 2.0.

If it were not for the risk of miscasting European friends as the enemy, one would be tempted, when surveying Boris Johnson’s Cabinet, to quote the Duke of Wellington: “I don’t know what effect these men will have upon the enemy, but, by God, they frighten me.”

Of course, Wellington said this – if indeed, he said it all – in praise of a new detachment of troops sent to him in Spain. But what should frighten us all about Mr Johnson’s newly assembled platoon – a caricature, even of the Conservative party – is its apparent collective willingness to take a breath-taking risk, unprecedented in peacetime, with the lives of us all.

It should horrify everyone. However, it should not surprise us if it also manages to give the Conservative Party a positive bounce in its poll ratings. It will be interesting to see how long it lasts, and whether it has any impact at all on Thursday’s Brecon and Radnorshire by-election.

Inevitably, the new Prime Minister has dominated the airwaves in his first days, while right-wing London newspapers, just as inevitably, have sung paeans of praise to the new man. After all, to many the change will come as a relief – light relief for sure, but relief nonetheless. Mr. Johnson’s style contrasts sharply with Mrs May’s stiff and dour demeanour.

She seemed to care little for that half of the country that wishes to remain in the EU, although she was not gratuitously offensive about it. Mr Johnson is more candid. He has not yet uttered a word about unifying the country. If liberality were ever his intention, it is hard to see that being enacted by Priti Patel at the Home Office or by Dominic Raab at the Foreign Office. His intent, behind the cosmopolitan mask, is to be the governing arm of the Brexit Party.

In his first Prime Ministerial outing in the Commons last week, he appeared positively high. An effervescent performance, reminiscent of a shaken pop bottle as the top is prized off, may be forgivable on his debut, but it is an act that will prove wearing. It cannot and will not last. Fizz fizzles out.

Helicopters will not follow his every car journey. Neither can he avoid penetrating scrutiny forever. He did not once subject himself to interrogation by the BBC’s Today programme during the whole course of the recent leadership campaign, while he was interviewed by Andrew Neil so late in the day that most votes had already been cast. Messrs Humphries, Neil and Marr will catch up with him soon.

Parliamentary scrutiny, after this ill-timed summer recess, will resume in September, focusing sharply on the principles and particularities at stake in the Brexit proposition.

It is true that in his first days in office Mr. Johnson has attempted to create an aura of decisiveness and strength. But it is bogus, an edifice built on sand. The mistake is to think that he cares. The elusive detail of an alternative agreement does not matter if your true intent is to leave without a deal. And be in little doubt that this is Mr Johnson’s intent.

With not a shred of evidence – and against all evidence that exists – he invites us to share Dr Pangloss’s view that ‘all is for the best in the best of all possible worlds’. Roll up for the optimists’ ball, party with Pangloss and Pollyanna, music supplied by Vera Lynn.

But let us beware. It is too easy to try to bury the new Prime Minister under a pile of verbal ordure, however merited. Jokes and satire will not be enough in the face of the current threat.

What do we face? First, we face a Conservative Government that no longer represents its traditional broad church, but rather a narrow sect. Pragmatists have been purged. The European Research Group mentality, even if not its people, holds the levers of power.

Second, we have a government that is not intent on sincere negotiation. Mr Johnson’s language is that of someone who plans to dictate terms that he knows to be unacceptable. With every phrase – ‘no ifs, no buts’, ‘do or die’ – he blocks off another avenue to his own retreat.

The lauded British art of compromise – whether in Westminster or Brussels – is for the birds. He is avidly seeking the impasse that will allow him to indulge the lubricious dreams of the front phalanx of his ministerial team.

Third, Mr Johnson fully intends to run down the clock. It is a mistake to think we have more than 90 days left to find a solution. The reality is that we have only 27 Parliamentary days left before 31st October.

Mr Johnson has a free ride until Parliament resumes on 3rd September. It then sits for only nine days before adjourning for the party conference season, reassembling on 9th October for the 18 days that remain before the end of the month. It is impossible to see how a renegotiated settlement can be achieved in this time frame.

Fourth, his hiring of Dominic Cummings, architect of a dishonest Vote Leave campaign, is the clearest possible sign that he intends to adopt a Trumpian strategy – cavalier with the truth, but rigorously puritan in its focus on the goal.  His inner Cabinet is a campaign committee, his Downing Street speech a campaign launch – first draft of a manifesto.

This is a massive challenge to all of us who believe that the best future for this country lies in a continued creative and constructive participation in the European Union.

The toughest challenge will be faced by the many Conservative MPs who will be wrestling with their consciences during the recess: which comes first country or party?

They know that leaving the EU without an agreement will do untold damage that will last for many years. They will put that in the balance with their fear of a Labour Government led by Jeremy Corbyn. They should remember that the damage done by a hard Brexit will last for generations, and that it will also weaken Europe itself. Saving Britain from Brexit will allow them to space to win back their own party to sanity.

Labour, too, is challenged. It was clear from this week’s first exchange that Mr Johnson will be a more formidable opponent across the despatch box. Mr Corbyn’s best bet is to demonstrate more convincingly than hitherto that the overdue conversion of his party to a Remain position is deeply felt rather than superficial. All equivocation has to be put on one side.

Mr Johnson’s overt display of boundless conviction – even if bogus – has to be countered by at least equal conviction on the other side of the argument.

The current situation is also a challenge to all those pro-EU organisations that have emerged in a great flowering of active support such as the European cause has never before enjoyed in this country. A thousand flowers have indeed bloomed, and it is joyful sight. But the scythe of cynicism threatens. We have to reconstitute ourselves into a robust and united edifice in very short order if we are not to be – for want of a phrase – left behind.

Geraint Talfan Davies is Chair of Wales for Europe and author of Unfinished Business: Journal of an Embattled European.