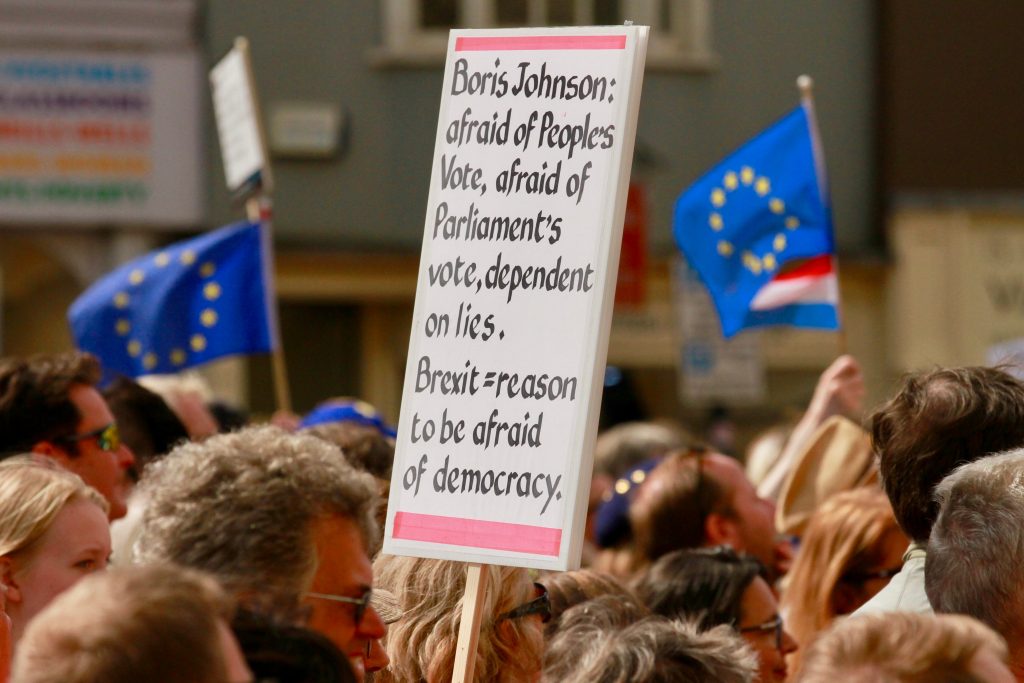 The Prime Minister’s disrespect for our democratic institutions is so unprecedented it forces us to march for Europe and for the rule of law, writes Geraint Talfan Davies

On Saturday morning people from all over Wales will gather outside Cardiff’s City Hall to protest against Brexit and to call for a new referendum. It will be a national march for Europe. We will do so in greater numbers in the wake of the devastating judgment of our Supreme Court on the disingenuous actions of the Prime Minister.

Why? Because the authority of the Parliament that we elect must be defended against an executive determined to circumvent it. The Prime Minister has been found out – again. He led a Brexit campaign with a blithe disregard for honesty and integrity of both message and method, and it now transpires he is running his government the same way.

For all Mrs. May’s weaknesses, she was an honest person, doing her duty in the most difficult circumstances. Not so, Boris Johnson. His election was a grievous error on the part of the shrinking platoons of Conservative Party members who, wearied by the long Brexit stalemate, fancied swapping a Roundhead for a Cavalier. Big mistake.

He escaped Parliamentary scrutiny throughout an August recess that started only days after his election, and he was intent on escaping scrutiny again during a prolonged prorogation. It is not difficult to see why.

During his very few Parliamentary performances as Prime Minister all he has been able to offer is bluster. He was even bested on some occasions by Mr. Corbyn, hardly an award winner at the dispatch box. What may have worked in a column for the Daily Telegraph, does not work in governing a country.

Twenty-one of his own party could not stomach it and defected.

At the Supreme Court he has had his comeuppance. For those familiar with scoring systems, 11-0 will seem about as decisive as it gets. Yet that hasn’t stopped our Prime Minister from claiming that those eleven justices got it all wrong. Contrition is clearly not in his nature.

Mr Johnson having been out of the country at an international gathering, one might be tempted to excuse him for not basing his self-serving conclusion on the level of diligence and attention to detail one might expect in these circumstances. But, we should not forget that, on diligence and detail, Mr. Johnson has form.

Whether as journalist in Brussels, wilfully traducing every action of the European Commission, or as foreign secretary making catastrophic errors about the imprisoned Nazanin Zaghari-Ratcliffe, he has been a stranger to activity and concepts such as homework, truth, accuracy and depth.

It speaks volumes that on such an important matter – one in which the Governments of Scotland and Wales and a former Conservative Prime Minister were all creditably engaged alongside the formidable Gina Miller – that Mr. Johnson’s own government was unable to a provide a sworn affidavit as to the reasons for its decision. It was an elision by guilty minds.

It is extraordinary that he remains in office. In the Conservatives Party’s pre-democratic era the grandees in suits would have long since sidled into 10 Downing Street and shown him the door. But when it comes to his own office, he is a determined remainer, even if now sadly emblematic of his own country’s reduced status in the eyes of the world.

There have been calls for the resignation of the ranting Attorney General, Geoffrey Cox – surely another disgrace to his current office. Others seek the heads of the Leader of the House, Jacob Rees-Mogg and the Prime Minister’s Special Adviser, Dominic Cummings. Don’t hold your breath, since if advisers go there is no reason why the person who accepted their advice should stay.

Contrast Mr. Cox’s theatrics with the unfailing poise of a previous Attorney General, Dominic Grieve. Contrast Mr. Johnson’s actions with those of the late Lord Carrington who resigned as Foreign Secretary in 1982, not because he himself had done anything wrong, but because his department had failed to foresee the Argentine invasion of the Falklands.

It is indicative of Mr Johnson’s dilettante carelessness that on prorogation he was oblivious of the implications for our constitutional monarchy. Either that or he was only too aware of what might be its helpful limitations. Mr Cameron’s indiscretions about the monarch’s role on a different issue pale by comparison.

The verdict of the Supreme Court will hang about Mr. Johnson’s neck forever – the court’s unanimity redoubling the weight. Assuredly, the Prime Minister would have been hoping to get away with his plan, but even had he done so he would have been guilty of sharp practice. Apparently, today we are expected to believe that sharp practice is acceptable as a means to an end. In this, as in other things, Mr. Johnson is a corrosive force.

In short, a British Prime Minister has been found guilty of unlawfully suspending a sovereign Parliament merely for the convenience of a frustrated government, and in doing so to have abused the relationship with the monarch. It is unprecedented in modern times.

In the wake of the Supreme Court’s decision, the egregious Mr Rees-Mogg apparently chose to call it a ‘constitutional coup’. No doubt such foolishness will be echoed in some newspapers with rash talk of ‘Who runs Britain? or ‘People versus Parliament’ or even ‘Enemies of the people’. We should treat such claims with the contempt they deserve.

Some will shrug their shoulders, irritated by the workings of our democracy, maybe even pining for a ‘strong leader’ to cut the Gordian knot. That is an insouciance that no conscious democracy can afford.

If for no other reason the citizens of Wales should make their way to Cardiff this Saturday to bear witness not only to the importance of securing for us a future within Europe, but also to the importance of having a working Parliament duty bound to express the views of electors, especially on a matter of unparalleled peacetime importance.

The debate in the Supreme Court was not the debate of some Oxford students union. Its decision, carefully weighed and coolly phrased, will impact profoundly on the constitution of this country – and for the better, whether on the Brexit issue that is at hand or on other issues that will arise in years to come.

It was a Conservative Lord Chancellor, Quintin Hogg, enobled as Lord Hailsham, who warned that our system could too easily become an ‘elective dictatorship’. The Supreme Court has strengthened the defences against that eventuality.

When we gather on Saturday at noon at Cardiff’s City Hall we will, because of the Supreme Court’s decision, march for Europe. But we will also march for the rule of law.

Geraint Talfan Davies is Chair of Wales for Europe