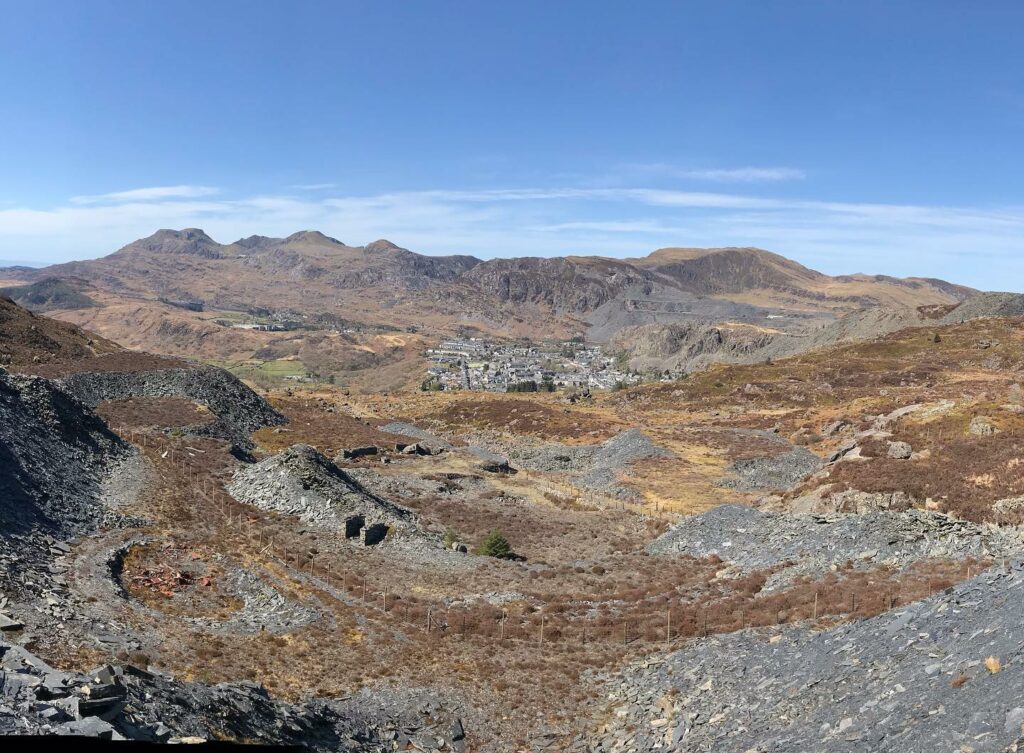 Lowri Cunnington Wynn explores the way communities can revitalise the place they live in through the idea of ‘restanza’, the active choice to stay.

Restanza means choosing to stay in a place in a conscious, active and proactive way by actively guarding it, being aware of the past while enhancing what remains with an impulse towards the future where a new community is possible. In this sense, staying is a dynamic concept, it is a form of journey, a manner to affirm a different existence and existence made of presence and action to hinder absence and abandonment. (Gaudioso, 2021)

Blaenau Ffestiniog was once described as the ‘town that roofed the world,’ but the decline of the slate industry and 100 years of deindustrialization have brought economic challenges and depopulation.

For mainstream policy, Blaenau is a peripheral and inferior ‘left behind place’. It is defined by loss and deficiency, with low and stagnant per capita output, high scores on social deprivation indices, dereliction on the high street, withdrawn transport and social services. So Westminster has a ‘Department of Levelling Up’ with policies that aim to ‘close the gap’ between those so-called peripheries and central places whose superior economic performance attracts the capable and ambitious.

Our Way Ahead report understands Blaenau through a different lens using the concept of restanza developed by the anthropologist Vito Teti in his work on his home village in the Italian Mezzogiorno, Stones into Bread (2018). Teti emphasizes the constructive importance of attachment to place and how staying behind can be an active, positive choice, and not simply the default of the less capable and adventurous. This complements our long-standing foundational interest in how ordinary places work, represented by an earlier study of Morriston which challenged the condescension of the mainstream approach to a knocked about, post industrial district town.

The attachment to Blaenau is not an individualistic choice because it involves a commitment to preserving and developing community.

In partnership with Cwmni Bro Ffestiniog, and with funding from Gwynedd Council and Menter Môn, we compiled a questionnaire which was designed to explore the relation of attachment between the Bro and its grounded community. The 150 people who responded were an interesting sub-group of Welsh speaking, better educated individuals who have actively chosen to live in the Bro. The survey respondents felt that it’s worth staying in Bro Ffestiniog mostly because of the people and their networks of family, friends and community. Our key finding was that close social relationships were what made the Fro a good place to live despite low GVA per capita.

Blaenau graduates do not arrange their lives around good jobs and school catchment areas, as in a cartoon English middle-class life. When asked to give three reasons for staying, respondents most frequently cited family, language, community and friends (work was cited by just four respondents). Plus ça change. This set of sociability priorities fits with earlier accounts of Blaenau, a generation or more ago by the anthropologist Isabel Emmett (1982). The Fro was and is a fairly self-contained area where residents spend most of their lives getting to know each other intimately. This remains a place of local characters and myriad cultural and social distinctions despite much change and, for example, as the survey responses demonstrate, attendance at chapel is almost invisible within the sample.

The attachment to Blaenau is not an individualistic choice because it involves a commitment to preserving and developing community. Preservation of a valued heritage was at the core of our interviewees’ preoccupations, as evidenced by responses such as ‘Gwarchod hanes’ (Protecting history), ‘Cadw y gymuned cymraeg i fynd am flynyddoedd maith eto’ (Keeping the Welsh community going for many years to come) and ‘Cadw ysgolion yn agored’ (Keeping schools open). But equally important were responses about building a different future. For example, one respondent suggested that it was about ‘sicrhau dyfodol, gwireddu potensial’ (securing a future, realizing potential) and ’dwi’n gobeithio fydd geni rywbeth i gynnnig’ (I’m hoping I’ll have something to offer).

Low wages and limited employment opportunities are priced into the calculations of those who choose to stay. But, even if a high performing economy is irrelevant to them, those who stay still need a job and housing which is affordable on local wages. When asked to give three reasons for leaving, respondents most frequently cited work or lack of work, housing, and public services or community facilities. At present the Blaenau population is stable and the age distribution is much the same as in the rest of Wales. If there are few jobs, relatively expensive housing and second-rate services, then Blaenau will decline through depopulation to become, like benighted villages in the Italian South, a place of old people waiting to die.

How do these research findings inform the foundational politics of place? Foundational thinking involves much more than claims about the importance of essential services provided by the welfare state and utilities. The foundational approach to place is based on one clear principle: If individuals are attached to the collective life of a place, the role of public policy, in general, should be to enable them to carry on living there on the assumption that they have the imagination, ability and inventiveness to continuously reinvent the place.  In the current nature and climate emergency, this social principle is reinforced by the ecological importance of reusing our stock of buildings and infrastructure.

Can our Welsh political classes get beyond the condescension of ‘left behind’ and ‘levelling up’ to recognize the vitality and potential of places like Blaenau whose virtue is fraternity?

The findings about attachment and the power of restanza in Blaenau are important because they indicate our social principle is salient in Wales. Can our Welsh political classes get beyond the condescension of ‘left behind’ and ‘levelling up’ to recognize the vitality and potential of places like Blaenau whose virtue is fraternity? Politicians of all sorts have generally pursued various kinds of liberty and equality and undervalued fraternity. But there can be a practical politics which secures the conditions of fraternity grounded in a place.

The foundational approach to places like Blaenau is to inquire empirically into how such places work, and what’s important to those who choose to live there. On this basis, we can then reframe the policy issue in foundational terms: when the local population wants to stay or chooses to come back, what practices and policies would support and enable them to do so? The work of securing the foundational conditions should then involve Welsh Government, Local Authority, Health Board, Housing Associations and all the other ‘anchors institutions’ working in alliance with community organizations on two fronts: first, ‘grow your own’ workforce development with a living wage in all the foundational sectors which employ more than 40 % of the local workforce, second; housing which is affordable at local wage rates through more aggressive policies of controlling second homes and Airbnb while buying or building to let at affordable rents.

What are we waiting for? Blaenau and the Fro deserve a new foundational politics.

The piece draws on the ‘A Way Ahead? Empowering Restanza in a Slate Valley’ by Lowri Cunnington Wynn, Julie Froud and Karel Williams.

Lowri Cunnington Wynn is a Lecturer in Aberystwyth University’s Department of Law and Criminology.