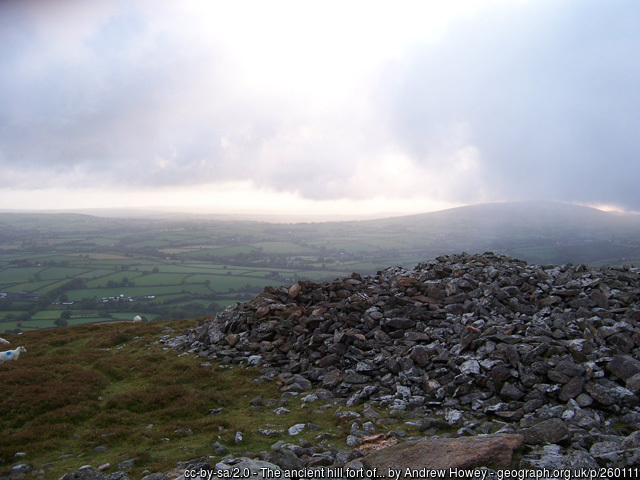 The place to start is Foel Cwmcerwyn, the highest point in Mynydd Preselau, the Preseli Hills. It’s two-hundred-and-forty feet short of the necessary two thousand feet for the Ordnance Survey to call it a mountain. But it feels like one. It’s known as Preseli Top. Looked at from the east its slopes have a sharp, glacier-cut curve, reminiscent of the Brecon Beacons. From its summit on a clear day you can see Ireland, Lundy and Devon, and most of Wales. But more to the point, from here you can see the whole of Preseli.

This is magical country, a land of enchantment. The hills have a mystical quality, due as much to the sky as the bare, rolling landscape. Together the sea, land and heavens produce a luminous light, changing with the weather and seasons. No wonder Preseli is a Mecca for artists.

Looking north from Cwmcerwyn you can see well beyond the River Teifi which marks Preseli’s border with Ceredigion. To the east are the hills of Carmarthenshire. To the south is the silvery line of Milford Haven and the chimneys of its oil refineries. And to the west is the coastline, with Carn Ingli above Newport in sharp focus. A little further south is Carn Llidi and St Davids Head.

The day I climbed Foel Cwmcerwyn the coast was obscured by a sea mist. It crawled inland where river valleys open to the sea, and circled round Carn Ingli into Cwm Gwaun. The sun made the mist look like water blending into the sky.

You can see Preseli whole from Foel Cwmcerwyn. But what exactly is it? Some think Preseli is the Welsh language term for Pembrokeshire. But that is Penfro, Sir Benfro being the official Welsh name for the county. Centuries ago Penfro, which means land’s end, actually referred to the territory south of the Milford Haven waterway. Preseli is to the north, stretching as far as the Teifi. It is most clearly identified with Mynydd Preseli.

The name Preselau appears in The White Book of Rhydderch, the earliest collection available of the Mabinogion tales. However, there is no agreement about the exact meaning or origin of the word. According to one explanation, which I rather like, the original was Pred-sel-au. In this formulation Pred means ‘passageway’ and sel means ‘gaze’ or ‘watch’ (extending it to selau gives you the plural form). It follows that Preseli is a place where you keep a lookout, perhaps for approaching enemies from the sea.

In constitutional terms Preseli first emerged in 1976 when Pembrokeshire was abolished and merged with Ceredigion and Carmarthenshire to create the new county of Dyfed. As part of that reorganisation district authorities were created, among them Preseli, the northern part of the old Pembrokeshire. It was made up of what had been the borough of Haverfordwest, the urban districts of Fishguard, Milford and Neyland, and the rural districts of Haverfordwest and Cemaes to the north. Then, in the 1996 reorganisation, the Preseli District disappeared, to be combined with South Pembrokeshire to reconstitute Pembrokeshire once more. Today, in a political sense Preseli survives as the name of the constituency, especially significant for me since I have stood here as a candidate for Plaid Cymru on three occasions. So the constituency boundary is the one I use to delineate Real Preseli.

The geography and settlement patterns are a mirror image of Wales as a whole. The north is mountainous and Welsh-speaking. The south has industry and the largely English-speaking majority. Like the north of Wales itself, northern Preseli has old slate quarry workings, on the slopes of Cwmcerwyn above Rosebush. And in the south there’s a coalfield, a worked out anthracite field that stretches from Hook, on a bend of the Western Cleddau River, in a narrow band to Little Haven and Newgale on the coast.

The west is bounded by bays: Cardigan Bay for Wales, St Brides for Preseli. Meanwhile, in both cases, their eastern frontier is defined by rivers. For Wales it’s the Severn; for Preseli the Cleddau. For both, too, their southern shores have large estuaries, the Bristol Channel for Wales, and Milford Haven for Preseli.

For both Preseli and Wales as well, their northern and southern territories are quite distinctive. In Preseli they are divided by the Landsker, which literally means a cut in the land. It marks the northernmost advance of the Norman invasion. In the west it begins where Brandy Brook flows into the sea at the northernmost point of Newgale beach in St Brides Bay. It skirts to the south of Mynydd Preseli, and moves eastwards in an irregular line. It is at one and the same time a political and linguistic frontier. Its political path is dotted with castles at Roch, Rudbaxton, Rath, Wiston, and finally Llawhaden on Preseli’s eastern boundary. Then it crosses into Carmarthenshire, and ends on the coast at Laugharne.

It is said that the Landsker is the only linguistic frontier of its kind that has not hardened into a national border. To be sure it changed position many times. It moved northwards into the foothills of Mynydd Preseli during the Norman military campaigns of the early Middle Ages, and retreated southwards in more peaceful times.

The castles were set back some distance from the disputed territory. Behind them were the richer farming lands. Although the line varied, it still established a firm linguistic divide. To the north were the Welshry, to the south the Englishry. These were designations given by George Owen, of Henllys, in his Description of Pembrokeshire in 1603. This was the first psycho-geography of the place. The distinction Owen drew survives to this day, albeit that the ‘Welshry’ are now interpolated by English incomers seeking the good life in youth as well as in retirement.

Although it is invisible, the Landsker frontier line is crucial to understanding many of the dynamics that operate in Preseli. The artist Meirion Jones, who has his studio near Cardigan, told me that when he ventures south of the Landsker, ‘It feels like I’m going abroad.’ Many southerners regard themselves as from ‘down below’, and when they go north it is to travel ‘up in the Welsh’.

It is intriguing how closely the Lansker follows a geological boundary, with the different rock strata reflected in the relative height and corresponding agricultural value of the land they have produced. The rocks to the south of the line are Silurian, relatively young and mostly carboniferous, while the ones to the north are Ordovician, far older, or even Cambrian or pre-Cambrian, older still.

There is certainly a different sensibility between north and south. The landscape and buildings on either side of the Landsker vary a good deal. To the south are nucleated villages, established by the Normans, with small green fields, high wooded hedgerows and sunken, flower-fringed lanes. Every village has its church, often with a high battlemented tower that served as a place of sanctuary against attack by Welsh raiders.

To the north the settlements are more dispersed, with farms scattered across bare hillsides. Small hamlets lie in deep-sided valleys. The churches are often completely separated from the settlements, and located on sites of old monastic cells. This is replicated in parts of the south as well, most notably on the Dale peninsula, where the small churches at Walton West, Talbenny, St Brides, Marloes, Dale and St Ismaels are built on ancient Celtic foundations. They are made more beautiful by their isolation. Most of the religious houses of the north are chapels dating from the seventeenth century revival. They are simpler, more remote, and represent a democratic impulse.

The language, of course, is the thing most separated by the Landsker. To this day it defines a border between overwhelmingly English-speaking Preseli in the south, and the still many Welsh-speaking communities in the north.

It may seem extraordinary how persistent have been the differences between the north and south of the Landsker, lasting the eight hundred years since the Normans invaded. One simple reason was the superb harbour at Milford Haven. This made possible easy sea communications between southern Pembrokeshire and Bristol. Given a fair wind and a good tide it was possible for a sailing vessel to make the journey there and back within forty-eight hours. For the whole time the territory was disputed most of the Englishry’s communication with the outside world was by sea.

Yet, despite all these differences Preseli has tended to grow together more than apart in recent times, certainly since I was a boy. In the 1950s the place I knew above all others was Little Haven where I frequently stayed with relatives. In those days it was very much inside the Englishry. The Union Jack invariably flew above the beach. Today, however, the flag is the Welsh Ddraig Goch. There’s even a suggestion that the place’s name could one day become bilingual. A bus timetable I saw recently, directed me to Aber Bach as well as to Little Haven.

I really began to get to know Preseli when I stood as a candidate for Plaid Cymru, first in the National Assembly election in 2007, and later for the Westminster Parliament in 2015, and for the Assembly again in 2016. When I first considered standing I met Paul Sambrook, Plaid’s constituency secretary, in the Llwyngwair Arms in Newport. I explained that although I had many associations with the place, I was not actually from Preseli. ‘I wouldn’t worry about that,’ he replied. ‘Hardly anyone is.’

That was an exaggeration. But it is true that over the years Preseli has welcomed incomers from most parts of the world. They come for all sorts of reasons. But most quickly share one thing in common. And that is an appreciation of Preseli as a unique place. It’s where landscape and people mix. Incomers tend to share native attitudes after they’ve been here for a while. There’s a common sense of living in a far-flung territory, sometimes even of being cut off. It’s the end of the line, and not just for railways. It often makes people feel abandoned, for instance when it comes to the provision of schools and hospitals. But it also makes them feel different, and a bit special.

‘Real Preseli‘ is published by Seren

John Osmond’s 'Real Preseli', published by Seren, is being launched at the Edge Festival in Solva on Sunday 4 August.