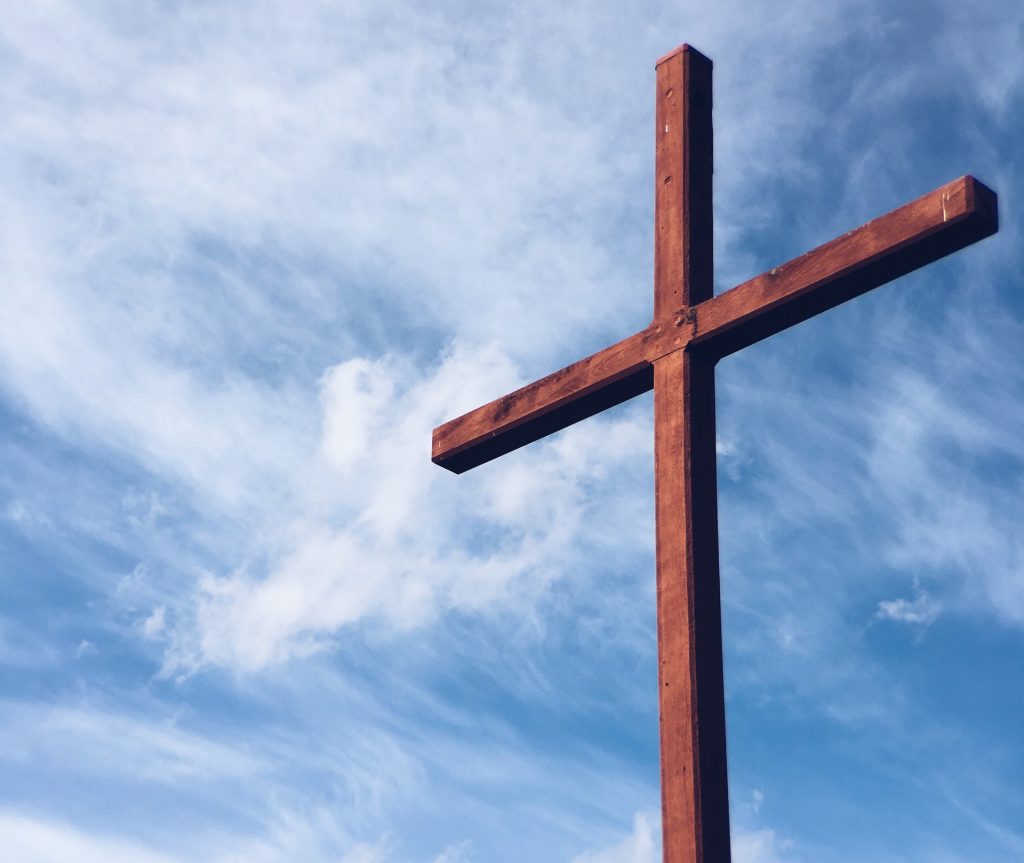 An Easter spent at home gives us chance to reflect on the places from which we derive our hope, writes Dylan Moore.

A few hours after the Prime Minister’s announcement – it seems a lifetime ago now – that anybody with a high temperature or a new and persistent cough should self isolate along with their whole household for 14 days, I began to sweat out a fever.

My temperature soared, my bones ached; I took two paracetamol and retired to bed. In the dead of night I was overcome with nausea and passed out on the bathroom floor, coming around to find my glasses mangled and the side of my face grazed and bruised.

Thankfully, I recovered within the week, and – at least initially – self isolation held the promise of long periods holed up reading long books, a kind of private heaven within the hell of ‘social distancing’. When my recovery overlapped with the imposition of a total ‘lockdown’, I soon found occupying two under fives while attempting to work from home is its own special blend of opposing spiritual dimensions.

I did, however, use the opportunity presented by post-viral fatigue to continue with Peter Frankopan’s magisterial ‘new history of the world’, The Silk Roads, the kind of book you can’t consume in one sitting unless you have a lack of pressing real-world commitments, although propped up on pillows and sweating out the last vestiges of fever is not necessarily the ideal circumstance in which to self-educate on the ravages of the thirteenth and fourteenth centuries.

Between regular checks of the Guardian’s rolling news blog and a Facebook feed filled with expressions of anxiety and gallows-humour memes (usually on the theme of toilet roll), I read long passages about the Mongol hordes sweeping across the known world, spreading fear and panic, followed by detailed explication of how the bubonic plague swept a third of the population of Europe into an early grave.

Then, crucially, I read this sentence, a pivot in Frankopan’s breathless prose and a crystallisation of everything I’d been feeling and wanting to express, not about history but about now:

And yet, despite the horror it caused, the plague turned out to be the catalyst for social and economic change that was so profound that far from marking the death of Europe, it served as its making.

As the Guardian blog detailed government announcements around the world, each playing catch-up with the last ever more unprecedented measure, I read of how the Black Death had led to ‘top to bottom reconfiguration of how social structures functioned’.

Wages for servants, craftsmen, workmen and agricultural labourers trebled. The peasantry were empowered by a weakening of the propertied classes. Landlords were forced to accept lower rents. Interest rates fell. Wealth was distributed more evenly. In turn, this led to better diets, better general health in the population as a whole and substantial improvement in life expectancy.

A couple of chapters later, of course, Europe recovers to such an extent that its healthier, significantly more prosperous population were happily subjugating fellow human beings in much of the remainder of the world. Such, perhaps, is the cyclical nature of history.

But in that idea of life coming from death, there is something universal. Through the seasons, nature itself teaches us this fundamental truth every year.

In one of humanity’s very oldest stories, told in The Epic of Gilgamesh and the Hindu Pralaya, the Gun-Yu of Chinese mythology, and by peoples as disparate as the Mayans and indigenous Australians, a great flood washes over the known world. It causes unprecedented death and destruction, but ultimately results in rebirth.

The story finds its best-known incarnation in the Hebrew Bible, and the figure of Noah, a righteous man quarantined on a self-built ‘ark’ with his immediate household and an impromptu travelling zoo. In the biblical version, the flood is the result of a torrential rain that lasts for ‘forty days and forty nights’, a period of time significant not least because of its repeated occurrence across scripture (including the period Jesus himself spent in the wilderness).

It also foreshadows the Venetian quarantena, a forty day period for which ships arriving from plague-ridden destinations were isolated. From this word we derive our modern English ‘quarantine’. However, in the ancient world the expression may simply have denoted an unspecified lengthy period.

It is appropriate that a painted rainbow in the window has become 2020’s symbol of hope. Holed up in our homes and unsure how long the prevailing conditions might last, there is an unconscious identification with Noah in his ark.

One day soon we hope to send out a dove who will return with an olive branch, that symbol of peace retained even now in the flag of the United Nations. Whatever form this takes in our own time, it will be the indication we seek: the end of the storm; dry land; salvation.

Writing recently in The Guardian, Rebecca Solnit, author of Hope in the Dark, draws another comparison, between quarantine and a chrysalis. ‘When a caterpillar enters its chrysalis, it dissolves itself, quite literally, into liquid. In this state, what was a caterpillar and will be a butterfly is neither one nor the other, it’s a sort of living soup,’ she writes. ‘Within this living soup are the imaginal cells that will catalyse its transformation into winged maturity. May the best among us, the most visionary, the most inclusive, be the imaginal cells — for now we are in the soup.’

Already there is agreement that we can’t go back to ‘normal’. The society we lived in – and already there is common usage of a past tense that might recast BC to mean ‘before coronavirus’ – has had a single strong beam of white light lasered into its darkest places. Homelessness, widespread poverty, underfunded public services, domestic abuse, hyperconsumption, climate degradation. The twenty-first century was an antediluvian dystopia before the virus arrived.

Now it seems we are well and truly in the soup, to use Solnit’s analogy. And to borrow another biblical phrase, the rainbow of hope for a future of any kind, let alone one that is brighter and kinder in line with the idealistic imaginings of we ‘imaginal cells’ is currently perceived only as through a glass darkly.

It has been incredible to witness how readily supposed cornerstones of capitalist society have been swept back in a bid to help save lives. For a few days, when it first became obvious that case numbers in the UK were tracking a similar gradient to those in Italy, Spain and other countries a couple of weeks further into the curve, there was much talk from the UK government about the need to balance management of the pandemic with the requirements of the economy (often with disruption to social life thrown in as an aside to make it look a little less like a stark choice was being made between people and profit).

The outpourings of appreciation for NHS workers as well as those in other essential services can scarcely have been more deserved. The roles that refuse collectors, warehouse operatives, delivery drivers and supermarket shelf stackers play in keeping society functioning can never have been more widely recognised.

Homeschooling parents have discovered a new respect for the job that teachers did all day every day until the virus closed school gates. And suddenly – and largely without irony – we are all in it together; a Conservative Prime Minister has proclaimed such a thing as society.

At Easter, this topsy-turvy thinking takes on an eternal dimension. It seems, in the current climate of uncertainty – in the soup – the kind of change we long for is the kind advocated by he whose death and resurrection will be celebrated this weekend (and next, in the Orthodox Church) by two and half billion Christians, almost a third of the world’s population.

Like the revelatory ideological fallout of Covid-19, the teaching of Jesus Christ flips the world on its head. What have we learned in this last month about society’s real key workers if not that ‘the first shall be last and the last shall be first’?

There is a perhaps understandable aversion to the word ‘repentance’ in mainstream secular discourse, perhaps owing to connotations of often hypocritical religiosity. However, its simple but difficult action – sincerely regretting the wrongs of the past and making a commitment to change – is surely what many of us are experiencing.

As individuals, nations, as the whole body of humanity, we have been forced into a stillness that seems at odds with the usual pace of modern life. As jets are grounded and fish return to the Venetian lagoon where once the plague ships served out their forty days and forty nights, even the most rationalist observers claim ‘the universe is telling us something’.

In his most famous public address, Jesus taught that ‘the kingdom of heaven’ – the movement he instituted, ‘not of this world’ – belongs not to the rich and powerful, but to the poor in spirit; to those who hunger and thirst for righteousness, especially those who are persecuted; to the peacemakers and the pure in heart.

Perhaps at the moment most poignant among this series of blessings, famous as the Beatitudes, is that those who mourn will be comforted.

This year, instead of the familiar story of Holy Week — from Palm Sunday through the Last Supper, Gethsemane and Golgotha to the discovery of the empty tomb — we seem somehow stuck in Holy Saturday. That’s the day between the crucifixion and the resurrection when — it seemed — nothing much was going on.

The followers of Jesus would not have known what to do with themselves. They must have suffered, all at once, with grief for their lost friend and mentor, guilt at their own disappearances in his hour of need, and an overwhelming anxiety at the uncertainty of the future.

It’s a similar mix of emotions for many of us right now. Some will be grieving lost friends and relatives in difficult circumstances; others feeling guilt at not being on the ‘frontline’, or not being able to help out practically, as we might wish, due to social distancing restrictions.

Most of us are experiencing some degree of anxiety, forceably incapacitated, worrying about the future, or doing what we used to perceive as next to nothing while the high drama happens elsewhere.

Lest we forget that those who mourned on Holy Saturday were people like us. Fishermen, a tax collector, a political radical, and still others whose day jobs were so run-of-the-mill they were, presumably, not worth writing down. Key workers and not-so-key workers, they too were thrown together by circumstance. All they had, too, was the proverbial rainbow on the window: hope.

Those ordinary humans became extraordinary – saints, in fact – through the fact that through the darkness of Friday and the silence of Saturday, they held on for Sunday.

Sadly that isn’t always the lesson of history, but it is the hope of Easter. It’s a hope rooted in transformation. And believer or not, it’s that Holy Saturday kind of hope – a clinging on to love and a faith in what we don’t yet see – that will determine what kind of butterfly will emerge from our current chrysalis.

Photo by Aaron Burden on Unsplash

Dylan Moore is Editor of the welsh agenda and teaches English at Llanwern High School, Newport.