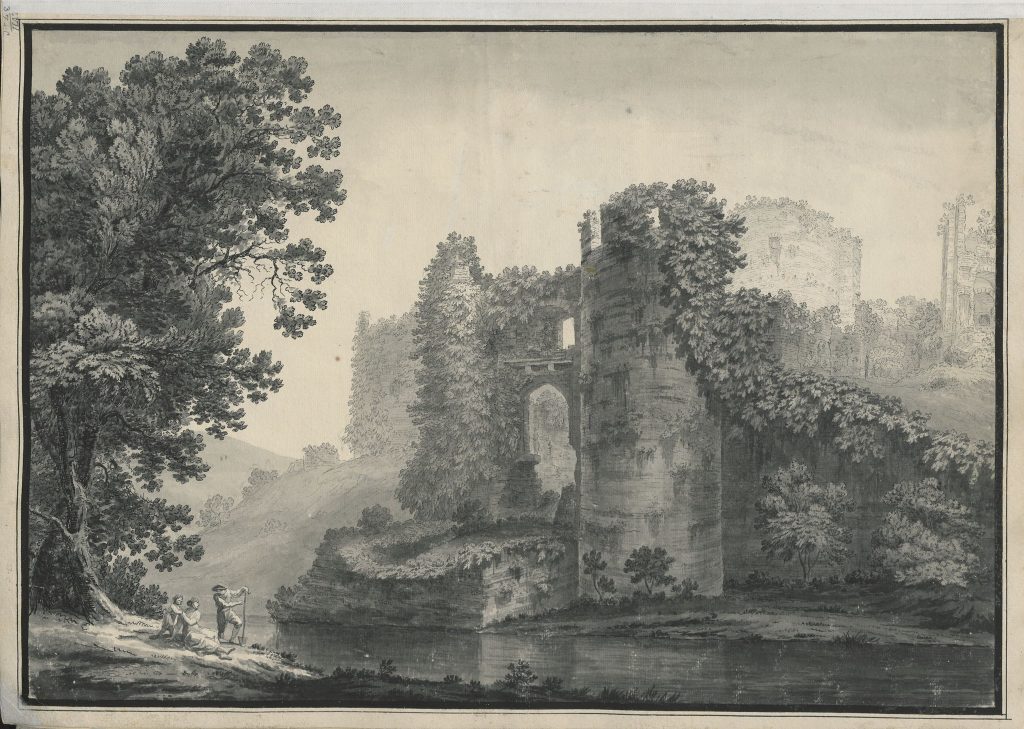 Exploring the links between land and identity, Merlin Gable asks if our experience of land can be separated from our myths about Wales.

If you go walking up Skirrid Fawr on the edge of the Black Mountains, past the recently expanded car park ready for coaches in the summer, past the steep wooded foothill, you reach a ridge, running along the length of the mountain and slowly rising to its final summit. It’s a good walk, and one that forces a physicality upon your mind through the effort required and the stiff wind that seems always to blow in from England. Or at least, it does to me.

And this is the point. Walking along that ridge, you can cast your eye left or right: right, across Monmouthshire, towards England; or left, into the Black Mountains and further into Wales. Now, this isn’t, as you might instinctively feel reading that statement, an attempt to corral you to look left, to turn your back figuratively and physically on England. Yet there is, as we seem in some ways often so reluctant to note, a difference not just in what we might call ‘place,’ which surely those who live upon that border know, between Wales and England, but also a real, observable, geographical difference. National feeling arises in the interstices.

Right, into England. The mountain drops down fast, giving way to the old road winding between Ross and Abergavenny and beyond it a loose, poorly regimented arrangement of fields; flat, green land spreading out across the last miles of Monmouthshire into the distance. I last went in winter but still visible amongst the barrenness were the signs of an economy apparently unchanging and yet materially transformed since mechanised farming. Some crops (although nothing like wheat here) and cows grazing with relative density, sheep too. There are houses, always painted white, lying not just in relation to the farmland but also, more recently, where people wish to live, arranging the land around into vistas as well as fields.

Left, into Wales. Skirrid Fawr drops slower on this side, covered in gorse as if the advance guard of the Black Mountains’ distinctive ecology. Or even it could be its last straggler left behind: a question of direction again. A short basin through which the road between Abergavenny and Hereford runs (nothing ‘old’ about this one – it’s now a major route into the Valleys) and quickly the mountains rise up again, crowding around at angles, conspiratorially, darker, greener, rings of pasture giving way to trees giving way to gorse and specks of sheep, giving way finally to the circling sky.

This place as lived, as an experience of culture and community as well, and as a place legally, historically and geographically determined, exist together in this one experience – in walking up Skirrid Fawr and looking left and right – as joined entities: you can’t disaggregate it into the purely imaginary and the purely material. There is, to be sure, its ‘vernacular of borders,’ as Owen Sheers identified in his poem about this hill in whose shadow he grew up, but at once we find a real lived relationship between the physical border of the hill and a cultural vernacular whose existence brings into constellation identities, social classes and geographies.

But that’s not to say you can’t be fooled. Skirrid Fawr – or the ‘Holy Mountain’ as it’s been called. Again, it’s a suggestion of a history and a set of values that we want to live through the land. The last mountain of the Black Mountains. The first mountain of Wales. ‘So much of the memory of this country was a memory of walking: walking alone … it seemed always, in memory, though not in fact,’ Raymond Williams writes in his magisterial first novel Border Country, which grapples with these same issues in this same place. We can be drawn into thinking of our own perception of a place as itself natively constituting the land, drawn centripetally into a Romantic history that the individual perspective so desires. And we’re well trained in that regard: alone, looking down at the land, feeling its history as something manifest – personal, yet demonstrative of a national history, of a struggle for identity which is, itself, only personal. It’s where the politically astute statement can easily slip into the sentimental. It’s ‘hiraeth.’

But look again, left into Wales. One hundred years ago – more recently even – at night the crowding of the hills would have been lightly illuminated by the far-off glow of Ebbw Vale and the world of ironworks and steelworks beyond. Look back further and down into the valley and you’d see a tramway – one of the first in fact – worming its way across the landscape allowing access from the canals in the iron country to Hereford, collecting up produce and the products of rural industry on its way, challenging, even in its ghostly form, the easy distinctions we sometimes make between country and city, industrial Wales and rural idyll, the rugged mountains and the lush valley floor.

Our land, then, has produced material differences which, in complicated, intricate and local ways, have determined the historical relations that produced ‘Wales’ out of one linguistic group’s isolation from its cousins. It’s reasonable to argue that Wales is a country because it is poor and because it has always been poor – mountainous, harsh, exposed to the Irish Sea. Marginal conditions have produced a marginal culture. That quintessential Welsh nihilist R. S. Thomas writes that

To live in Wales is to be conscious
At dusk of the spilled blood
That went into the making of the wild sky,
Dyeing the immaculate rivers
In all their courses.
It is to be aware,
Above the noisy tractor
And hum of the machine
Of strife in the strung woods,
Vibrant with sped arrows.

How exhausting, then, it must be to be one of Thomas’s ‘impotent people, / Sick with inbreeding,’ for whom every sight is charged with painful, historical inheritance. This is a poetic optic, of course, but in making its strident point it skilfully elides the real work of Welsh society – the ‘noisy tractor’ (so inconvenient when you are trying to hear centuries-old arrows) – under the clamour of history turned into myth in its violent yolking to the land. In an inventive reversal, it is the blood that has coloured the land, not the land which has coloured the blood.

The real, lived way we exist determines the landscape that we use as a resource to create our national stories

And so, as Williams once warned Plaid Cymru, we risk reaching for the fancy dress and reducing Wales to a constellation of places – of charged cultural peculiarities focused upon geographical localities. The strong people upon the strong land, our resolve as unmovable as our mountains, the huddled workers cottages of the south Wales valleys demonstrating a resoluteness of spirit emblematic of their mining heritage. The wind blowing in from the east, from England. Or so it always seems to me.

he, like Thomas, captures a tendency endemic in constructions of Welsh identity to effectively merge representation of the material and the transcendental – the link between the language and the ocean, the voices like leaves, clouds and rain. Welsh expression, in this poem, is Welsh land, and the tacit suggestion is of a form of embeddedness and naturalization that goes well beyond any identification of a ‘knowable community’ towards a cultural, even ethnic, manifest destiny.

This is an inheritance that we are all, I believe, to a greater or lesser extent haunted by. But despite its best efforts to fool you otherwise, it is as historically and materially contingent as anything else. There was much less rugged open country before demand for wood for ship building, mine building, and smelting saw swathes of forest disappear across Wales. There would be much more forestry now if sheep farming didn’t suppress sapling growth. These aren’t value judgements, or policy positions, but rather observations that suggest that the real, lived way we exist determines the landscape that we use as a resource to create our national stories. And yet it is clear, and already happening, in the face of ecological collapse and painful, protracted economic transformation, that this material reality will shift and the land will change. How well will we hear Thomas’s arrows when the tractor falls silent if smallholder farming becomes uneconomical? And what will it mean for the Welsh language when Humphries’s ocean does change, with wind turbines far out at sea like sentinels watching the shore?

I’m thinking about Barthes’s statement at the end of Mythologies that ‘I have tried to define things, not words,’ about how our coming to know about something so close to us – our land, Wales, the countryside – comes to be through our speaking of it and a rooting of our cultural expressions in it that is as constructive as it is metaphoric. We think of it as myth coming alive in seeing the land, a change just beneath the surface. ‘The land’ is itself, of course, a metonym doing this work: which land? whose land? and how do we know? And yet we do.

But myth, Barthes reminds us, ‘is always a language robbery.’ We can be equally impoverished by myth, by the ‘fancy dress’ of Welsh culture. It should not be a shocking suggestion that we Welsh have something of a habit of self-mythologizing. There are the old myths – poor Gelert and valiant Owain Glyndŵr – but there are also the new ones: Capel Celyn, or the miner’s strike, slowly fading as a practical touchstone of class resistance as the relations to production and labour have been so radically changed.

Then there is a wider, subtler fabric of myth: Thatcherism, Wales the underdog, hiraeth-as-lived-experience, the treachery of the Blue Books. To call these myths is not to relegate them to the realm of the untrue, but rather to suggest we extrapolate from this history a wider act of nation-building and imagined community that might go well beyond their social, economic or cultural afterlife in any strict sense. Myth is exactly that: something we use to come to know ourselves, but it is not the thing in itself. ‘It is easy to speak of a proud independent people,’ Williams writes, but it is much harder to think as a proud independent people.

And what comes in through that gap? It would be a gross exaggeration to claim all these things as products of our feelings about our land. And yet, when the time comes as it clearly now has, that we must go through another, significant historic rupture of our use of, and therefore relationship with, the land, it is certain that these myths too will change. There are common themes that can continue even as the specific relations will change: mining the earth and harnessing the sun and wind above it, the resilience of communities in the face of great transformation, the smallholder farmer as custodian of the land and centre of the community. There will be new resonances, whichever way the wind blows.

The BL King’s Topographical Collection: “View of the Castle of Caerphilly in Glamorganshire Wales”. Source.