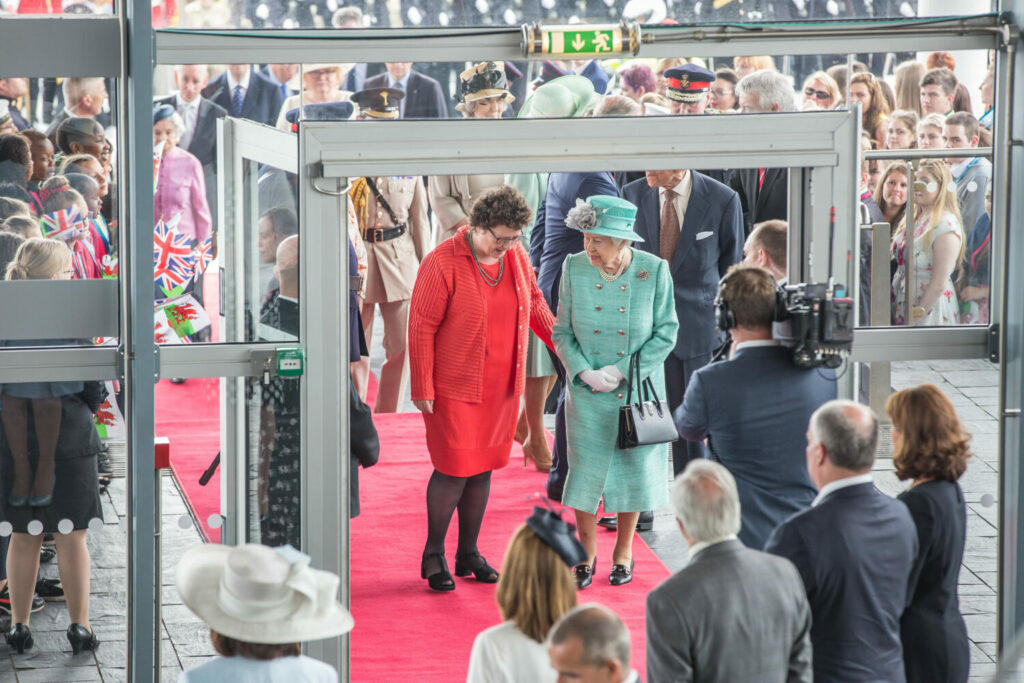 The IWA says that HM Queen Elizabeth II presided over the strengthening of Wales as a nation, a country emerging confident into the era of devolution

When Queen Elizabeth II ascended to the throne on February 6, 1952, Britain had an Empire. Wales did not have a capital city, let alone a Parliament.

In the days following her death, much analysis of the Queen’s life and legacy has claimed the monarch as ‘a constant’ in a century of unprecedented change.

Born in the age of the wireless, Elizabeth II was crowned in the age of television, and died in an age of smartphones, augmented reality and artificial intelligence.

And after seventy years on the throne, exactly twice the duration of the IWA’s existence, it is little wonder that much of the commentary has taken the long view, repeating the narrative that the Queen’s seven decade reign is the story of Britain’s decline as an imperial power, and its transformation into a modern, multicultural society.

In May 1999, Ron Davies, then Secretary of State for Wales, famously set out the framework for devolution in a pamphlet published by the IWA ahead of the first elections to the then National Assembly for Wales:

Devolution is a process. It is not an event and neither is it a journey with a fixed end point. The devolution process is enabling us to make our own decisions and set our own priorities, that is the important point. We test our constitution with experience and we do that in a pragmatic and not an ideologically driven way.

For Britain as a whole, the Second Elizabethan Age has also been a long, slow process, albeit punctuated by events – from the Suez crisis of 1956 to the Hong Kong handover in 1997, the same year Wales voted narrowly to secure a modicum of devolved power.

Queen Elizabeth II visited the Senedd on seven occasions, opening six sessions of what is now the Welsh Parliament, and the Senedd building itself.

In the same month that we published Ron Davies’ pamphlet, Queen Elizabeth II described the National Assembly for Wales as ‘a bridge into the future’, and returned to this metaphor four years later at the opening of its second session.

She told members: ‘Bridges span divides; they unite people… You are bridges between the people and the devolved government of Wales.’

Despite the development of numerous national institutions in the late nineteenth and early twentieth centuries, almost all of the trappings of Wales’ growing political maturity emerged during the reign of Elizabeth II.

Cymru did not even have an official flag until the coronation of Elizabeth II in 1953. This ‘augmented’ flag, featuring the Royal Badge of Wales, was criticised and later changed to its familiar current design in 1959.

Elizabeth II first set foot in Wales as monarch at the railway station in Llandrindod Wells. Her first royal engagement was the opening of the Claerwen reservoir in the Elan valley, Powys on 23 October 1952. Four days earlier, there had been an unsuccessful attempt by a small republican group, Y Gwerinaethwyr, to blow up the pipeline from the Claerwen dam to Birmingham.

Llandrindod was also the location for the launch of Ymgyrch Senedd i Gymru, the cross-party campaign for a Welsh Parliament led by Megan Lloyd-George, daughter of former Prime Minister David Lloyd-George. A rally in July 1950 led to a petition signed by almost a quarter of a million people demanding a Senedd.

It would be almost half a century before their wish was fulfilled, but the same Queen would be on the English throne.

It was another Lloyd-George, David’s youngest son Gwilym, then Minister for Welsh Affairs and Home Secretary, who designated Cardiff as capital city of Wales in 1955.

Earlier that year, a parliamentary debate around the Government of Wales Bill (1955), rejected by the UK Government, had begun with a portentous speech from S.O. Davies, MP for Merthyr Tydfil, who began: ‘I know that Wales is frequently regarded as being just a region, just an area somewhere within the United Kingdom with very little regard paid to its problems, to its intensely interesting history and to the culture which is peculiarly its own.’

If that description might be held to still hold true in many quarters today, the debate is dated by Davies’ reference to the ‘many hundreds of letters, postcards and telegrams’ he had received, including ‘scores in my own language that have come to me, wishing me good luck and supporting the Bill’, and also by their sources, which aptly characterise the Wales of the time.

Letters came from ‘rural district councils… from unions of Welsh chapels and churches, from groups of young people, cultural societies… the Cymmrodorion Society and quite a number from the Urdd Gobaith Cymru, Undeb Cymru Fydd, and from the staffs of several of our secondary grammar schools’. And in a sentence that hints at the country’s socio-economic and political fault lines, he adds: ‘I have even had them from branches of miners’ lodges.’

According to the Bill, the ‘Welsh Parliament is proposed to be known as the Senate of Wales [as] an ideal translation of the Welsh word Senedd, and [therefore not] to be confused with the Parliament of the United Kingdom.’ Of further interest to advocates of Senedd reform today, the 1955 proposals suggested a Senedd of 72 members, with a full complement of Westminster MPs retained.

In a foreshadowing of the Queen’s description of the Senedd as ‘a bridge to the future’, S.O. Davies describes the proposal as ‘a modest Bill’ focused on preparing foundations on which ‘a considerable measure of self-government could be built in the future.’

He continued: ‘we are entitled to, should have and must have, more power to look after our own Welsh affairs than we have had.’

Although the Bill was rejected, what transpired throughout the reign of Elizabeth II was a long, slow process toward ever-increasing degrees of self-government for Wales, interspersed with soft power initiatives that simultaneously bound Wales into the union.

In 1958, Wales’ new capital city hosted the Empire and Commonwealth Games, where the inaugural Queen’s Baton Relay – a round-the-world carrying of a message from the monarch – took place, beginning at Buckingham Palace and ending in the host city.

In 1960, The Welsh Grand Committee of MPs was instituted, to consider the impact the legislation and finances outlined in the UK Parliament would have on Wales. It was not until as recently as 2017 that translation facilities were installed to allow this Committee to converse in both of the principal languages of Wales.

In 1964, the UK Labour Government upgraded the post of Minister of Welsh Affairs, instituted in 1951 under the Home Secretary, to the level of Secretary of State. The Welsh Office, responsible for implementing UK government policies in Wales, was created the following year, and only disbanded following the creation of the then National Assembly for Wales in 1999. The majority of the powers once exercised through the Welsh Office are now shared between the Welsh Government and departments within UK Government, with the Office of the Secretary of State for Wales undertaking a support and advisory role.

Perhaps symbolically, the one time headquarters of the Welsh Office in Cathays Park is now the primary office of Welsh Government, containing the private office and residence of the First Minister for Wales.

In 1965, Welsh nationalism was catalysed by the drowning of Capel Celyn, and Gwynfor Evans, Plaid Cymru’s first MP, was elected the following year in Carmarthen.

The 1960s highlighted the complexity of the relationship between the British Monarchy and the people of Wales, with the Queen expressing lasting regret for the delay in her visit to Aberfan following the tragedy at Pantglas Junior School, but also praised for her open show of emotion when she did arrive in the village, which she subsequently visited on a number of further occasions throughout the remainder of her reign.

The Investiture of Prince Charles in Caernarfon in 1969 was famously the target of protests and a bombing campaign, but also the scene of welcoming Welsh well-wishers.

By the time the Institute of Welsh Affairs was established, in 1987 – the year which turned out to be the halfway point of the Second Elizabethan Age – Wales was a very different country to the one over which the Queen had gained dominion in 1952.

The origins of the IWA lie in the industrial and political crisis that Wales faced in the 1980s, following the rejection of democratic devolution in the 1979 referendum and the trauma of the miners’ strike of 1984-85.

Our analysis has always been that the story of Wales – as a country, a nation and a democracy – is far from finished. It is, as Ron Davies wrote in that IWA pamphlet, ‘not an event, and neither is it a journey with a fixed end point’.

And as we mark the end of the Second Elizabethan Age, royalists and republicans alike will recognise that Queen Elizabeth II also understood history as a process.

From her unique vantage point, she was probably better placed than anyone on earth to know that the world and its nations do not, will not, cannot stand still.

Looking back now, we can see that in many ways she was, like our Senedd itself, ‘a bridge into the future’.