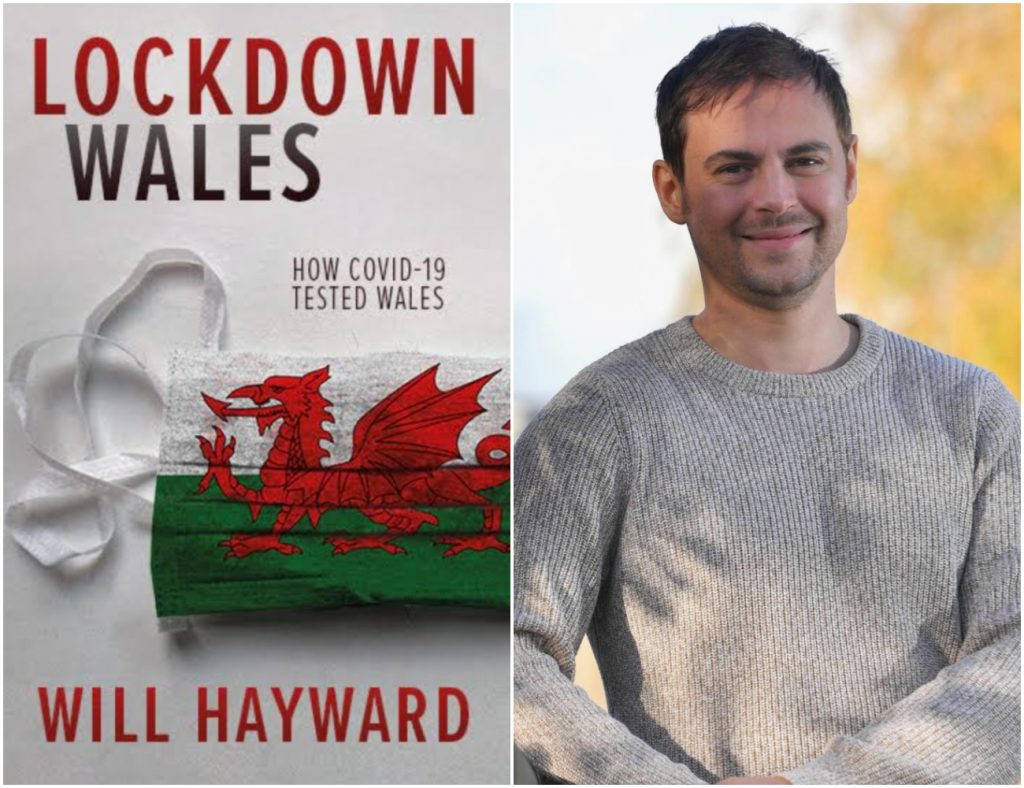 Will Hayward introduces his new book and outlines what lessons he hopes will be learned from what we have experienced in 2020.

In this opening extract from Lockdown Wales: How Covid-19 Tested Wales, Will Hayward explains why he wrote the book, who it’s for, and what lessons he hopes will be learned from what we have experienced.

Do you ever just take a moment among all the noise, announcements, changes to restrictions and just ask yourself: What has happened?

As I write this, Wales is in a two-week ‘firebreak’ and England is heading into a one month lockdown to try and get on top of spiralling cases. In the space of just six months, all our worlds have changed.

We now think twice about hugging friends and family we don’t live with. People we used to see every day now only appear in our lives as pixels on a screen. Diaries that were full of trips, visits and occasions are empty, after all, what is the point in making plans too far ahead?

In the middle of something so seismic, so enormous, and frankly, so horrible, it is hard to fully grasp what has happened. There is just so much depressing news.

The temptation can naturally be to just try and let it wash over you. To just push your headphones deeper into your ears to drown out the relentlessness of it all.

This book is written as an aid for people in Wales to understand what has happened to themselves, their families and their lives.

And it is important that we do understand. In the age of fake news, when people would have us believe that facts are open to interpretation, an understanding of an issue prevents misinformation from flooding in to fill the gaps.

“The virus was inevitable, but an appalling lack of preparation as well as an initially sluggish and anaemic response was not.”

But understanding is most important because the issue isn’t just what happened to us, but why.

Hearing politicians speak you would be under the impression that the loss of lives, jobs and futures was inevitable – an act of nature. The virus, of course, was inevitable. Even if it had not been Covid-19, it was only a matter of time before a new and emerging infectious disease emerged to threaten us.

The virus was inevitable, but an appalling lack of preparation as well as an initially sluggish and anaemic response was not.

A pandemic had long been identified as one the biggest threats facing society. In 2016, the UK government conducted ‘Exercise Cygnus’, a simulation to test readiness for a pandemic, and found us lacking.

But as this book and our own lived experience shows us, four years later, we were not ready. As other countries have demonstrated, the number of deaths and the economic catastrophe that followed were not because of the virus, they were the result of decisions.

If we fail to understand fully what happened to us and why, we fail to hold to account those responsible. In not holding the decision makers to account we also doom ourselves to repeat this suffering in the future.

“The UK in 2020 was a road with hundreds of small potholes…  a hodge-podge approach to social care as well huge economic, gender and racial inequality to name but a few.”

But this is not ultimately a story about politicians or Covid-19. This is a story about the people of Wales – and how both the virus and decisions made by politicians affected them. It is about how people in Wales both suffered and died, but also rose magnificently to the challenge.

The theme that will come up time and again throughout this book is not that Covid-19 wreaked havoc on a thriving United Kingdom.

The UK in 2020 was a road with hundreds of small potholes. They could have been filled in while the sun was shining but they were not. Covid was the water that filled those potholes and then froze overnight, cracking open the shortcomings in our society into fissures.

These potholes will not come as a surprise. An underfunded health service, a political culture that scorns collaboration and long term planning, a hodge-podge approach to social care as well huge economic, gender and racial inequality to name but a few.

This book is divided into two parts. The first is a chronology, tracking how the virus developed in Wales from December 2019 to July 2020. The second looks at the key themes and issues that arose in the first wave of the virus.

The book records and explores events up until July 6 – the first day that no deaths were announced in Wales since the lockdown began. In many ways this is a shame.

There were dozens of other circumstances subsequently that fall outside the scope of the book that I would love to have covered: the A-level and GCSE result saga, the failures in the UK Government’s Lighthouse Labs and the October firebreak lockdown with the Welsh Government’s ban on the sale of non-essential goods.

At time of writing Wales and the wider UK sadly seem to be entering a second wave. Though this is not covered in the book, the events of March through July are the foundations of everything that has come since.

If the outbreak in March had been handled better, perhaps the UK wouldn’t be preparing for a socially distanced Christmas.

At the beginning of February 2020 I was offered the job of acting Political Editor at WalesOnline and the Western Mail – the national newspaper of Wales.

The current political editor was going on maternity leave for around twelve months from the end of March and I was asked to step into the role from my post as Social Affairs Correspondent.

When the Editor-in-Chief and I spoke about the subjects I would look to cover over this period all the discussion was about issues like poverty, the end of the Brexit transition period and ways to make politics accessible and relevant to readers. We had no idea that from the start of March almost every story I would cover for the next six months would be about just one thing.

Through my new position I was able to interview on a near daily basis the people making the decisions that changed all our lives. I hope I am able to provide insight into what has happened to us all.

This book is not intended to make a political point. It is about how Covid-19 affected the people of Wales. However, political decision-making is intrinsically linked to this, and criticism and analysis of our politicians’ performance is inevitable. No one is doubting how hard the task before them was.

However it is my strongly held belief that to put oneself forward as a Member of Parliament or a Member of the Senedd (or any elected representative for that matter), is an act of supreme confidence. You are standing before people and telling them that you, and only you, are best placed to make their lives better.

“Understanding what has happened to us and why is the first step in ensuring that, in the longer term, it is change for the better.”

You are asking to be trusted with power over their lives, to decide how their children are educated and how they will be treated when they are old. You and your political party are asking for permission to tax their wages on the understanding that you will use the proceeds to make their society better.

You are saying that you can guide them through any crises. It shows total self assuredness. Because of this, you must be held to a higher standard. On morality, integrity and simple competence it is not enough to be ‘not too bad’. That is the standard I am applying within this book.

There are two final points to make. The first is to note that this is an incredibly fast moving situation. The science of this virus is progressing every single day. It is perfectly possible that some of the analysis I do within these pages will eventually be out of date as our understanding grows.

Frankly, I really hope that is the case because it means we are better placed to stop Covid having such a hold on our lives.

The second point is that no single book can cover all of the issues that the coronavirus pandemic raised. With a fast moving situation, it was often necessary to only touch on very worthy subjects for the sake of a coherent narrative. For that I can only apologise.

The crisis has changed Wales, the UK and in all likelihood the entire course of human history. Understanding what has happened to us and why is the first step in ensuring that, in the longer term, it is change for the better.

Lockdown Wales is published by Seren: £9.99

Will Hayward is a multi-award winning journalist and the Acting Political Editor of WalesOnline, the Western Mail and South Wales Echo.