Dylan Moore shares his thoughts on The Welsh Way, a new anthology of essays decrying the hold of neoliberal values in the Welsh public sphere.

It gives a broad overview of the consensus that governs Wales’ public sphere centred on a pre-pandemic speech by Mark Drakeford which ‘had it all: radicalism, a sense of a Wales that is distinct (and always defined against England as a yardstick) in its pursuit of equality, motivated by hagiographic notions of Wales’ radical socialist past’.

The authors contend that this ‘narrative of Welsh social democratic distinctiveness’ – which, let’s be honest, we all recognise – has become ‘an article of faith… widely accepted by the Welsh political class (consisting not just of politicians, but academics, journalists and commentators)’. The book’s central thesis is that the picture painted by Drakeford and by extension by all of us is ‘not remotely true’; it substantiates this repudiation in twenty-three essays that take Welsh Labour to task across a full gamut of social and policy fields.

‘Wales is… a deeply neoliberal country’ they say, and the evidence is overwhelming – and damning. Devolution is a ‘passive revolution’ that has resulted in ‘the continued collapse of Welsh society under the pressures of late capitalism’; ‘the Welsh Way is to play the subordinate partner in… relations with international capital’ and to ‘tinker around the edges’. Policies hailed as Welsh Government success stories – ‘plastic bag charges, 20mph speed limits, banning pavement parking [are] small gestures within a system that continues to immiserate people.’

‘The Welsh Way is a full frontal attack: jabs, hooks and near-fatal body blows delivered from the Left.

Let me begin, then, by admitting the presence of a log in my own eye. Editing a current affairs magazine for a leading Welsh think tank, there is of course a danger that I, together with this very magazine and the IWA more widely, are a part of the very ecosystem that perpetuates cosy consensus and thereby facilitates neoliberal orthodoxy and props up political timidity.

Having said this, however, the bibliographies following each essay reveal that around a third of the book’s contributors draw upon articles published in the welsh agenda. So at the very least we are hosting the debate – although this is little succour when that debate characterises our nation, with stacks of evidence, as a place of ‘nuclear colonialism’ (Robat Idris); ‘marketisation of universities’ (Joe Healey); ‘a lack of affordable housing’ (Steffan Evans); ‘the highest rate of incarceration in western Europe’ (Polly Manning); and ‘discriminative policing’ against both ethnic minorities and the homeless (Mike Harrison).

Former IWA Chair Geraint Talfan Davies has often called Wales ‘the land of the pulled punch’, and if this has for many years been true, with a soft and consensual centre-left fending off occasional aimless roundhouses from the Right, The Welsh Way is a full frontal attack: jabs, hooks and near-fatal body blows delivered from the Left.

‘Unsurprisingly, neoliberalism is held to make little sense of ‘something as basically, unquantifiably, elusively human’ as culture.

A central section of the volume is organised by ‘Policy Fields’ and I turn first to the areas where I have personally experienced the so-called ‘Welsh Way’ on the ground.

‘In a world where everything is quantifiable, teaching and education now focus on producing data. Schools test children to track their progress, and schools and teachers themselves must be tested to ensure they are delivering high quality services. This culture forces schools to compete with one another… discourages solidarity and encourages overwhelmed teachers to begin “teaching to the test”.’

Evans sees ‘some progressive and ostensibly laudable ideas’ in the new curriculum but a fundamental contradiction in its wedding to ‘the logic of neoliberalism education’, governed by Wales’ overriding obsession with PISA rankings.

On Culture, Kieron Smith inevitably begins with a long quotation from the Welsh godfather of its complex definition, Raymond Williams, before encapsulating it in a pithy and rather beautiful phrase of his own: ‘the very stuff of the individual and collective soul’. It is a welcome intrusion on the relentlessly Marxist framework for the book’s overall analysis, which predictably relegates spiritual aspects of the human condition beneath material concerns.

Unsurprisingly, neoliberalism is held to make little sense of ‘something as basically, unquantifiably, elusively human’ as culture. A similar claim could be levelled about Marxism and the soul, and to this we will return in conclusion.

Smith goes on to use Raymond Williams’ distinction between cultural policy ‘proper’ and the concept of ‘display’ to interrogate the way ‘arts organisations… are expected to pick up the slack of a state that has failed to look after its most vulnerable’. As with education, the bureaucratisation of arts funding is immediately recognisable to one who has experienced the system.

‘Much more compassionate rhetoric emanates from Cardiff Bay than from Westminster, but it makes little difference to people’s lives.

More seriously still, Rhian E. Jones’ critique of ‘Institutional vs. Grassroots Representation’ in the arts and culture is equally unerring: ‘under neoliberalism… culture [is] increasingly pitched in terms of instrumental value rather than intrinsic worth’. She lists the National Eisteddfod, Brecon Jazz and Hay Festival as being used vacuously to ‘promote’ Wales, rather than ‘exploring or critiquing it more deeply’.

Jones also rightly points out ‘closures, cuts and downgrading’ of ‘libraries, cultural facilities [and] independent music venues’ as symptoms of ‘austerity’ associated with UK Conservative Governments, but – and here is the point The Welsh Way hammers home repeatedly – unmitigated by a timid and complacent Welsh Labour Government in Wales that has more tools within the current devolution settlement to build a truly different kind of society than they would have the Welsh people believe.

One area where Welsh Government is beholden to UK-wide policy is immigration and asylum. Much more compassionate rhetoric emanates from Cardiff Bay than from Westminster, but it makes little difference to people’s lives.

As Faith Clark puts it: ‘the reality of seeking sanctuary in Wales is little different to seeking it elsewhere in the UK.’ For all that phrases like ‘A Tolerant Nation’ and ‘Nation of Sanctuary’ have become currency in Wales, in pointed contrast with the ‘hostile environment’ dreamt up in Whitehall, this language can be contested with the question marks that accompanied both the title of the University of Wales Press volume that ‘Revisit[ed] Ethnic Diversity in a Devolved Wales’ and that of Clark’s essay here. Our conclusion must be that, just like ‘clear red water’, such phrases serve as midwives to a pernicious status quo in which Welsh realities are masked by the comfort of endlessly repeating empty ideals.

I have no doubt about the good intentions of many of our Senedd politicians, some of whom I know personally to be warm, caring and hard working individuals. But there can be no doubt that The Welsh Way is a wake up call. For Senedd members, and – let’s break the fourth wall here – for all of us. (When ‘we’ write ‘us’ in articles like this one, we should admit that ‘we’ are talking to ‘ourselves’ – other members of the ‘political class’ – academics, journalists and third sector good eggs, doing our little bit to mitigate the worst effects of a system we are failing to overturn).

And let’s also say this: even The Welsh Way, with its laudable commitment to social justice, its unpulled punches and its gender balanced range of contributors, hardly represents the collective lived experience of the people of Wales. Its editors make a point of claiming that ‘unlike most other books on Welsh policy [it is] written in the main by those on the margins of academia and the mainstream commentariat; PhD students, early career academics, ex-academics and activists.’

I have no doubt that many of the contributors have indeed experienced precarity, but it must also be recognised that this loose collective of marginalised academics represent a very narrow milieu of Welsh life.

‘Any campaign for the improvement of workers’ rights to live and work in more humane conditions must demand something truly new.’

What we need much more of – and I am thinking internally here too, reflecting on my own practice as a teacher, writer, editor and some-time activist, as well as about the IWA – is the type of platforming presented in the final piece of this volume.

‘Interview with Butetown Matters’ gives voice to Shutha, Nirushan and Elbashir, three young people from south Cardiff who talk about their own experiences: that ‘it’s not exactly the kind of place where you are granted much opportunity’ (Bash); ‘we regularly feel let down by the authorities and those in power’ (Nirushan) and ‘you’ll get people coming into schools, the police telling you not to use drugs, don’t do this, don’t do that… but nobody talking to us about the right things to do’ (Shutha).

These are vital voices if we are ever to emerge from the national malaise the book identifies.

One step removed from this approach, Frances Williams’ piece on ‘How the High Ideals of The Well-being of Future Generations Act Have Fallen Short’ draws on her PhD research as a ‘participant observer within community groups at “the receiving end” of policy’. This depressing phrase comes from a volunteer’s characterisation of ‘the dynamic at play’. Awful because it speaks of people having policy – schemes, programmes, action plans  – done to them rather than with or even for them; depressing because true.

I turn finally to Gareth Leaman’s piece: ‘Washed Up on Severnside: Life, Work and Capital on the Border of South-East Wales’. After the ‘Policy Fields’ I have worked in, here is a ‘View of a Neoliberal Wales’ from the place I call home. How much will I recognise amid the ‘post-industrial ruination’?

The writer excoriates the Western Gateway project that has seen the UK and Welsh Governments, and local councils, ‘complicit in… granting the residents of Gwent the freedom to devote all their waking hours to precarious, underpaid and unfulfilling jobs, and the freedom to coat their lungs in carbon monoxide in pursuit of this debasement’.

Leaman identifies gentrification and deregulation as neoliberal tools to disrupt and dissolve social cohesion. He goes on to analyse the way class tensions resulting from an influx of middle class Bristolians to working class Newport can be passed off as anti-English xenophobia.

Leaman posits Mark Fisher’s concept of ‘red belonging’ – an ‘unconditional care without community (it doesn’t matter where you come from or who you are, we will care for you anyway)’ as a way out – and fittingly for a volume that owes so much of its theoretical underpinning to the work of Raymond Williams, ends with a search for resources of hope: ‘Any campaign for the improvement of workers’ rights to live and work in more humane conditions must demand something truly new’. He quotes Matt Colquhoun: ‘a form of existence which cannot be expressed in capitalist vocabulary’. It is the glimmer of a dream: to ‘demand more out of what it means to live, and never stop fighting for it’. A new Welsh Way.

If only we could find the beginning of the path.

For that, the humility of removing logs from our eyes will be painful but essential. We would do well to revisit the teachings of the one who first used the metaphor – in Matthew 7:5 and Luke 6:42. This is not to suggest rehashing hagiographic notions of Wales’ Christian nonconformist past to match or replace the radical socialist ones, but gently to posit the notion that there are forms of existence outside of capitalist vocabulary and neoliberal hegemony. 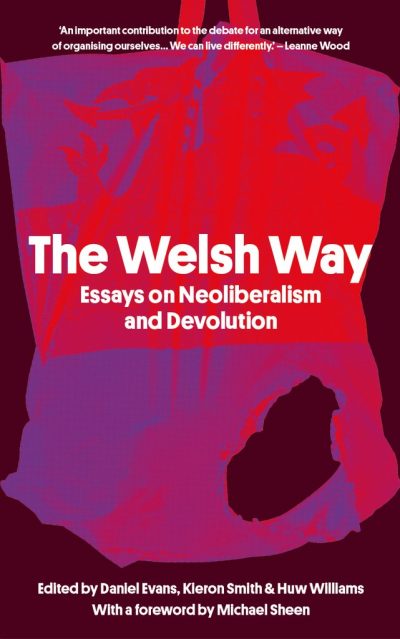 Unconditional love, community and hope transcend the material world that bound a Marxist analytical framework – and at least as much as I recognise the post-industrial ruination and human debasement, I’ve experienced these on Severnside too.

The Welsh Way: Essays on Neoliberalism and Devolution