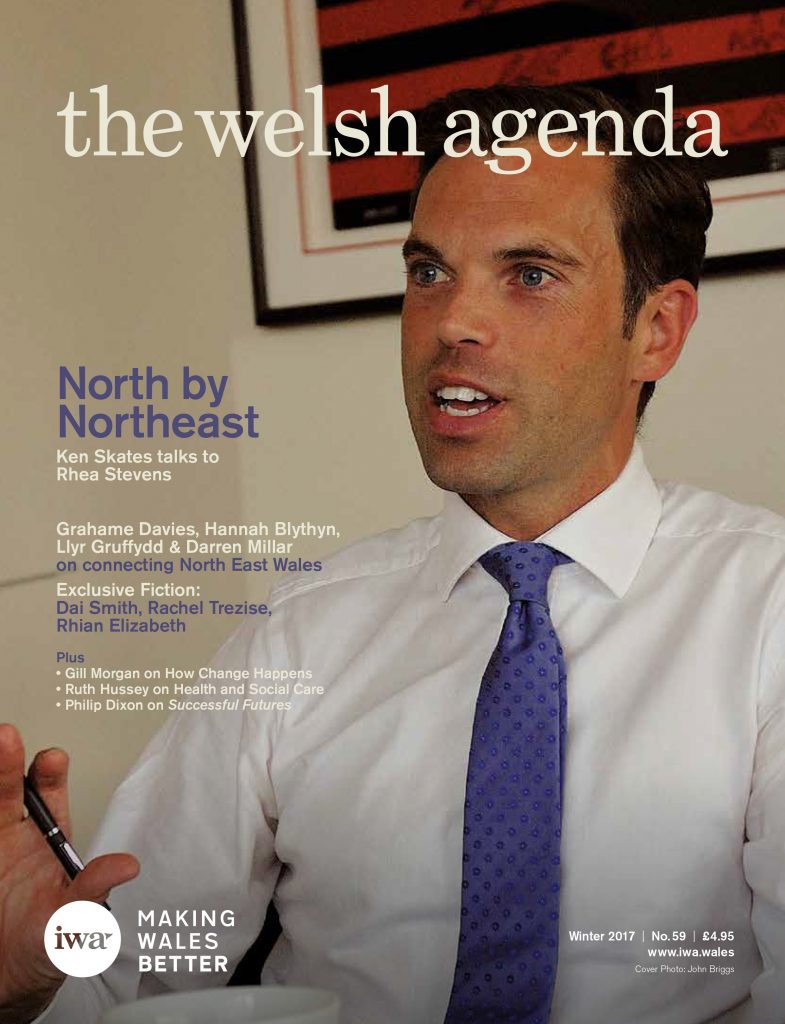 The new agenda is out. As Editor of the IWA’s biannual membership magazine, that might well mean more to me than it does to you, given that a big chunk of my life over the last few months has gone into curating and collating it. Then again, it might mean just as much to you, especially if you are an IWA member; unwrapping the welsh agenda from its plastic wrapping and hungrily devouring its 68 pages of news, views, reviews, comment and analysis might well be part of the rhythm of your year. A highlight, even.

Certainly, Matt Mathias hinted that this was the case when I invited him to contribute the ‘Last Word’ column a couple of issues back. He waxed lyrical about his favourite recent issue of agenda, the one with with Stephen Crabb on the cover. Since that edition (Winter 2015), we’ve featured an eclectic range of Welsh people on our covers: the artist Charlie Burton, a group of students from Cardiff and Vale College, and National Theatre Wales’ Artistic Director, Kully Thiarai. This time it’s another politician: Ken Skates.

The Cabinet Secretary for Economy and Infrastructure is interviewed in this issue by the IWA’s Policy, Projects and External Affairs Manager Rhea Stevens, about his formative experiences in the north east of Wales as well as recent controversies such as the infamous ‘iron ring’ idea for Flint Castle. The piece also refers to the ‘muted disappointment across the policy community waiting for detail on delivery’ in the wake of Prosperity for All: the document many of us thought was the Welsh Government’s long awaited economic strategy. This interview with Skates is part of a series focused on north east Wales, with contributions from across the Assembly chamber: Conservative Darren Millar, Plaid Cymru’s Llyr Gruffydd and Labour’s Hannah Blythyn all offer perspectives on how the region might be better connected to the rest of Wales. Poet and Real Wrexham author Grahame Davies offers a personal slant on the identity politics of an area that is sometimes seen – as by a man referred to in Davies’ piece – as ‘not even in Wales’.

As well as the deliberate focus on a region of Wales that is often neglected (at least in the south), another departure for this Winter’s edition of the welsh agenda is our publication of fiction. We are proud to publish new work by three of the Rhondda valley’s finest. Evocative short stories by Rachel Trezise and Rhian Elizabeth together form a counterweight to Dai Smith’s magisterial longer piece, ‘Passing(it)On’, narrated by a woman dying along with the south Wales she has known. Set in 1987, the year Margaret Thatcher’s visit was greeted by protests, and when the new Secretary of State Peter Walker initiated the ‘Programme for the Valleys’, Smith’s narrator evokes a long-gone world of ‘aprons and shawls… dai caps… spuds and onions… strikes and lockouts’.

Trezise picks up the baton ten years later, her narrator a prostitute working in Riverside against a backdrop of the demolished Cardiff Arms Park. The Spice Girls are on the radio and Princess Diana’s death is on the front pages. ‘Wales is changing,’ says one of her characters, ‘things is changing fast.’ By the time we reach the present day and Rhian Elizabeth’s story, the Grenfell Tower fire and the spectre of terrorism provide the backdrop to a gritty story about teenagers at the bottom of the pile. All three stories concern themselves with the relationship between Wales and the Establishment in London; the royal family and distant Conservative governments are a common thread, along with characters barely muddling through life in a Wales defined by its poverty.

All of which convinces me still further that literature is a useful vehicle for exploring social issues and giving voice to the voiceless, a point Mike Jenkins makes in his ‘Last Word’ column, eloquently castigating the ‘business’ of ‘Educating for results’ and the downgrading of literature’s status in Wales’ schools. Elsewhere, Philip Dixon runs the rule over the delay to Donaldson rollout, while Nicholas Fenwick and Vanessa Webb ask the pertinent questions ‘What next for Welsh farming?’ and ‘Who cares for Young Carers?’ respectively.

The breadth of the magazine’s coverage, along with the extent of its reach, is something we are looking to develop into the new year and beyond. The next issue, our sixtieth, will be themed ‘Wales and the World’, focusing on our relationships across borders and over seas, as we seek to discover what Wales might learn from elsewhere as well as what we could be offering to others. If you would like to contribute to the magazine, we are always open to suggestions and ideas. Please email [email protected]. In the meantime, please enjoy the latest edition.

The welsh agenda, Wales’ longest running current affairs magazine, is a membership benefit of the IWA. We only exist because of the continued strength of our membership and supporters. There is more information on how to join here. Past editions are available to download here.

Dylan Moore is Editor of the welsh agenda.

One thought on “The welsh agenda: issue 59”