A pop up space set up in Merthyr Tydfil to host creative discussions about democracy and politics, The Talking Shop follows in the footsteps of its previous iterations based in Newport and Cardiff: there is art on the walls, comfortable seating, and most importantly, limitless supplies of tea.

Yesterday, the Talking Shop was the place chosen by the Independent Commission on the Constitutional Future of Wales to launch its interim report, in an informal event that gathered officials, journalists and members of the public. 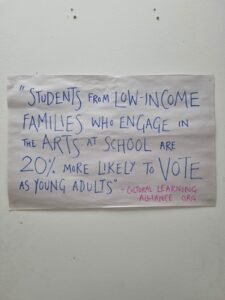 With this choice, the members of the Commission are making two points loud and clear: one, that their work rethinking Wales’ future must include all of Wales to be truly representative of the will of the nation; two, that this work is still ongoing, and must go on through new, innovative processes of engagement and participation if it is to be effective and break away from the status quo.

Another point emphasised by Commission co-chair Dr Rowan Williams, and reiterated in the interim report, is that issues of governance can no longer be sidestepped. As Professor Laura McAllister, the Commission’s other co-chair observes, there is no evidence to support the continuation of the current settlement. At the core of this unsustainable status quo are three issues: the erosion of devolution; a lack of flexibility in our current devolution agreements which leaves much up to the UK’s unwritten constitution; and a lack of leadership from Westminster to guide change.

Democratic education is far too often neglected and remains a function of cultural capital and access to resources guaranteed by family and socio-economic background.

Those issues are well-known. Our own research highlights how Parliaments in the UK could work better together to hold our Governments to account. However, we also warned against the use of policy agenda such as Levelling Up to engineer a retrenchment of devolution in Wales. Rather than simply reiterating those tensions, the interim report outlines three potential solutions, all with their risks and opportunities. The first is to strengthen the current devolution settlement. The second is a new UK constitution that would embed the principles of federalism in Government, endowing England with its own devolved legislature. The last is Welsh independence.

As Dr Williams noted, those constitutional issues are pressingly concrete ones and the Commission’s approach was determined by two key factors: evidence-based commitment to finding out what works, and an emphasis on identifying what allows people to feel in charge of their life and to trust that institutions work for them. Dr Williams emphasised Wales’ cooperative tradition and its associated sense of being responsible for one another’s well-being, which he argues is crucial to the Commission’s work.

Beyond constitutional reform, it is no surprise that democratic education was at the centre of this event. The IWA’s recent report written in collaboration with The Open University in Wales, Citizens’ Voices, People’s News, recommends that the Welsh Government should take steps to strengthen Democracy and Citizenship education in schools, including more explicit guidance for the teaching of democracy and citizenship.

The choice to launch the report in The Talking Shop, a space dedicated to making democracy accessible and intelligible to citizens, was also a reminder that democratic education is far too often neglected and remains a function of cultural capital and access to resources guaranteed by family and socio-economic background.

But education about democracy, as Commissioner Kirsty Williams also noted during the event, is not simply about knowledge: it is also ‘about skill’ and about having the experience of using your voice and your own power to make change in your community.

The Commission’s open consultation, which aims to enable people from all around Wales to have their say on Wales’ future, has already received a high volume of replies: according to Laura McAllister, they amount to over 2,000. As she noted, however, those who have replied are precisely those people most likely to be equipped with the cultural capital and knowledge mentioned above – and the commissioners were keen to point out their keenness to listen to and learn from people from all walks of life.

During questions, one member of the audience incisively commented that marginalised communities are not hard to reach, but, rather, that they are easy to ignore. 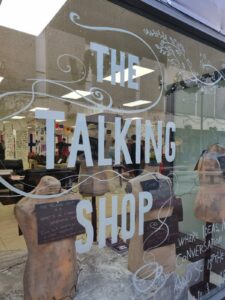 The Commission’s work must be underpinned by an approach to engagement that does not patronise or ignore those communities who are most frequently excluded from the political sphere and therefore more likely to be the targets or the victims of misinformation.

This also means a healthy and decentralised Welsh media sphere capable of representing Welsh stories, and not only focused on the goings-on of political institutions all too often centred in and around Cardiff.

At the end of the event, Yvonne Murphy noted her intention to bring The Talking Shop ‘out of the shop’ into the community – and to take her now famous sofa and standard lamp on tour around Wales to encourage more discussions about our political futures with the people less likely to know about it.

While such initiatives are essential to fostering a healthy civic sphere, they cannot be left up to a single organisation or individual to organise. It will be on all of us to make sure that current and future generations of Welsh citizens understand how our democracy works. Democratic education will be crucial if Wales is to be in a position to take charge of its own future, whatever its constitutional form.

At the IWA, we look forward to discussing the Commission’s interim findings and next steps as widely as possible in the coming year.